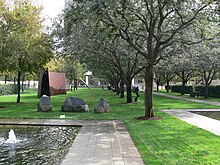 Exterior of the museum

Opened in 2003, the Nasher Sculpture Center is a museum in Dallas, Texas, that houses the Patsy and Raymond Nasher collection of modern and contemporary sculpture. It is located on a 2.4-acre (9,700 m2) site adjacent to the Dallas Museum of Art in the Dallas Arts District.

In 1997, Raymond Nasher acquired a plot of land in downtown Dallas across the street from the Dallas Museum of Art and hired architect Renzo Piano to design the Nasher Sculpture Center. The Nasher Foundation funded the entire $70 million cost of designing and constructing the museum, which includes indoor and outdoor galleries. The Sculpture Center opened in 2003 and features a regularly changing exhibition of works from the Raymond and Patsy Nasher Collection. By placing the facility on what was formerly part of the old Caruth family farm of circa 1850, Ray Nasher began the realization of the Arts District in Dallas, which has since been enhanced by the construction of the Winspear Opera House and the Wyly Theater.

Renzo Piano, winner of the Pritzker Prize in 1998, is the architect of the Center's 55,000-square-foot (5,100 m2) building; he had been selected after Nasher met him at the opening of the Beyeler Foundation in Basel, Switzerland, in 1997. Piano has designed several critically acclaimed art museums; foremost among them are the Beyeler Museum in Basel, the Menil Collection in Houston, and Georges Pompidou Centre in Paris (in collaboration with Richard Rogers). He has been praised as an architect who has the genius to meld art, architecture, and advanced engineering to create some of the most remarkable museums in the world.

Piano worked in collaboration with landscape architect Peter Walker of PWP Landscape Architecture on the design of the 2-acre (8,100 m2) Garden. Walker has exerted a significant impact on the field of landscape architecture over a four-decade career. The scope of Mr. Walker's landscape projects is expansive and varied. It ranges from small gardens to new cities, corporate headquarters and academic campuses to urban plazas.

The building was constructed by The Beck Group, which also served as associate architect.

The facility opened in 2003 in a 55,000-square-foot building on a 2.4-acre site adjacent to the Dallas Museum of Art. Reflective glare of the nearby Museum Tower, constructed in 2012, comes in through the glass roof, putting portions of the collection at risk of damage. Artist James Turrell considered his work Tending (Blue) to be effectively destroyed by the glare, and the museum closed the interior of the sculpture to the public at his request. [1]

The museum has two levels: the ground level houses three galleries, institute offices, a boardroom and a gift shop. [2] The garden terraces downward to the auditorium, creating an open-air theater.

The Nasher Sculpture Center features rotating exhibitions drawn from the Nasher Collection as well as special exhibitions in its indoor and outdoor galleries. Among the major exhibitions organized by the Nasher are Matisse: Painter as Sculptor, the first Matisse sculpture retrospective in the U.S. in 20 years; Tony Cragg: Seeing Things, the first major U.S. museum exhibition of the artist in 20 years; and Variable States: Intention, Appearance, and Interpretation in Modern Sculpture, an exhibition and symposium on sculpture conservation organized in conjunction with the Getty. The Nasher Sculpture Center has also presented Jaume Plensa: Genus and Species; Alexander Calder and Contemporary Art: Form, Balance, Joy; and Ken Price Sculpture: A Retrospective.

Monthly events include Target First Saturdays for children and families, Til Midnight featuring Al Fresco dining, twilight strolls, bands and movies, and the NasherSalon series which welcomes distinguished speakers for an evening of discourse on art, architecture, and other cultural topics of interest. The Nasher Sculpture Center also participates in the Block Party Series together with the Dallas Museum of Art, the Crow Museum of Asian Art, and others in the Dallas Arts District. [3]

Doris Salcedo was born in 1958 in Bogotá, Colombia, her current residence. [12]

Nasher Sculpture Center Board of Trustees

Jeremy Strick has been the Director of the Nasher Sculpture Center since March 2009. Mr. Strick oversees collections, exhibitions, and operations at the 2.4 acre museum located in the heart of downtown Dallas’ Arts District.