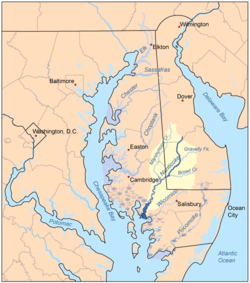 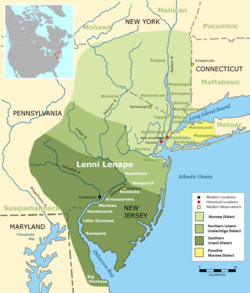 The Nanticoke people are a Native American Algonquian people, whose traditional homelands are in Chesapeake Bay and Delaware. Today they live in the Northeastern United States and Canada, especially Delaware; in Ontario; and in Oklahoma. [1]

The Nanticoke people consisted of several tribes: The Nanticoke proper (the subject of this article), the Choptank, the Assateague, the Piscataway, and the Doeg.

The Nanticoke people may have originated in Labrador, Canada, and migrated through the Great Lakes region and the Ohio Valley to the east, along with the Shawnee and Lenape peoples. [1]

In 1608, the Nanticoke came into European contact, with the arrival of British captain John Smith. They allied with the British and traded beaver pelts with them. [1] They were located in today's Dorchester, Somerset and Wicomico counties. [2]

In 1668, the Nanticoke emperor Unnacokasimon signed a peace treaty with the proprietary government of the Province of Maryland. In 1684, the Nanticoke and English governments defined a reservation for their use, situated between Chicacoan Creek and the Nanticoke River in Maryland. [1] Non-native peoples encroached upon their lands, so the tribe purchased a 3,000-acre tract of land in 1707 on Broad Creek in Somerset County, Maryland (now Sussex County, Delaware). In 1742, the tribe met with neighboring tribes in nearby Wimbesoccom Neck to discuss a Shawnee plot to attack the local English settlers, but the gathering was discovered and the leaders involved arrested. Some moved up to Pennsylvania in 1744, where they gained permission from the Iroquois Confederacy to settle near Wyoming, Pennsylvania and along the Juniata River. They moved upriver a decade later. They joined the Piscataway tribe, and were both under the jurisdiction of the League of the Iroquois. [3] The reservation on Broad Creek was sold in 1768.

Members of the Conoy people joined the Nanticoke in the 1740s. Together they were neutral in the French and Indian War. During the American Revolution, they allied with the British. In 1778, two hundred Nanticoke moved north to Fort Niagara because of their alliance. Later the British resettled them at the Six Nations Reserve near Brantford, Ontario, Canada, giving them land in compensation for what they had lost. [3] Other Nanticoke stayed at Buffalo River, New York. Another group of Nanticoke joined the Lenape and migrated to Kansas; in 1867, they moved with the Lenape to Indian Territory. [3]

Their autonym is Nentego, which means, "Tidewater People." [1] The Nanticoke chiefdoms are now described as the Wicomoco, Monie and Manokin, which occupied areas along the rivers that were named after them. [2] The Nanticoke had an extensive trading network with tribes throughout the Chesapeake Bay area. Early accounts described the Nanticoke tribes as the Arseek, Cuscarawoc, and Nause. [4]

In 1744 some Nanticoke settled near the Indian River in Delaware. They reorganized as the Nanticoke Indian Association and were recognized as a tribe by the state in 1881. [9] They have their headquarters in Millsboro. In 1922 they were chartered as a non-profit organization. They organized annual powwows, carrying them on until the mid-1930s, during the Great Depression. In 1977 the tribe revived the annual event. Later they built a museum in honor of their heritage, to teach their children and other Americans. [9]

Some Nanticoke settled across the Delaware Bay in southern New Jersey, where they joined the Lenape and intermarried with them. The Nanticoke Lenni-Lenape Indians of New Jersey are recognized by that state and based in Bridgeton. [9] They have numerous members with mixed Nanticoke and Lenape ancestry. Both tribes were historically Algonquian speaking, and there have been years of intermarriage between them.