In the 30 years of NASCAR sanctioning weekly racing for a national championship, the tracks have been split, initially by geographical proximity of the tracks for purposes of developing regional champions, then randomly among four divisions and currently by states that have tracks participating.

The series began as the NASCAR Winston Racing Series in 1982 as weekly, local track racing sanctioned by NASCAR. As announced at the Weekly Series banquet in Las Vegas on November 11, 2006, Dodge dropped their sponsorship of the weekly series. Whelen Engineering picked up the sponsorship, renaming it the NASCAR Whelen All-American Series. For the 2010 season, NASCAR lowered the age minimum for its weekly racing series from 16 to 14.

In 2005 the Weekly Series became the first NASCAR-sanctioned series to have a permanent presence outside of the United States, as tracks in Saint-Eustache, Quebec, Delaware, Ontario, and Wetaskiwin, Alberta, elected to be represented in the series.

Under the original regional format (1982–2004), a competition performance index (CPI) was used to determine the regional and national championships. The complicated CPI used four factors — winning percentage (feature wins / feature starts), top fives (top five finishes / feature starts available at tracks), car counts (track's average car count / highest average car count of track in a region) and starts (features driver started / feature starts available at the track). With the change to the divisional format in 2005 along came a more simplified point system. The system awarded two points per position in the feature event, with a maximum of 25 cars starting and 50 points going to the winner. If more than 25 cars started, two points were awarded from 26th place on back. Bonus points were also awarded to each driver starting a feature — 20 points for at least 21 cars starting, 10 points for 15 to 20 cars starting, and none for less than 15 cars starting. The same system was used when the change to the state format took place in 2007, but the bonus points were reduced to just five points for the feature winner. In 2010 the maximum was dropped to 20 cars starting and 40 points going to the winner. For the 2014 season the maximum cars starting was dropped to 18 resulting in 36 points for the winner. Bonus points for the feature winner was also changed to three points if the winner started in a single-digit position (i.e., fifth) or five points if the winner had a double-digit starting position (i.e., 12th).

What cars are used to score points in the weekly series is up to the discretion of the individual participating tracks, within Weekly Series guidelines. As of 2005, sportsman, two classes of pavement Late Model chassis (Super Late Models, which have offset chassis, and Late Models, which have perimeter chassis), pavement Modifieds (both the " Tour Type" and the SK formula), dirt Modifieds and Late Models, and super stocks are considered eligible categories. Participating tracks are all short tracks, ranging from 1/4 mile to 5/8 mile; most are paved, but a significant number of dirt tracks also participate. 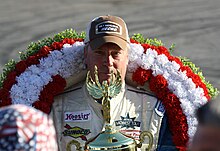 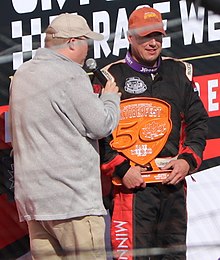