Music Midtown is a large music festival that was held in Atlanta annually from 1994 to 2005, and—after a six-year hiatus—returned in 2011. During its original run, the festival ran on one weekend each year. The event drew in excess of 300,000 attendees per year during its peak years.

Music Midtown started as a two-day event with three stages. It later grew to a three-day event. During the years that the festival had a three-day run, the event had six main stages. Each of these stages were typically sponsored by a local Atlanta radio station and were used to present dozens of bands playing a wide variety of musical genres. Due to a decline in attendance and rising expenses after the 2005 Music Midtown, promoters placed the festival on hiatus in 2006. The hiatus ran through 2010. The festival returned as a one-day event in 2011 and then expanded to its current two-day format in 2012. 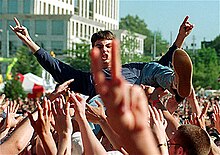 The festival was conceived by Atlanta-based music promoters Alex Cooley, Peter Conlon and Alex Hoffman who sought to create an event similar to the New Orleans Jazz & Heritage Festival. The intent was to present a wide variety of music that both men had come to enjoy during their careers in the music industry.

In 1994, the festival launched on a parcel of undeveloped land at Peachtree St. and Tenth St. in the heart of Midtown's business district. After a few years at this site, the festival was forced to move to make way for the construction of the new Federal Reserve Bank of Atlanta. The new festival site chosen was in downtown just north of Centennial Olympic Park and consisted mainly of closed-off streets and surface parking lots which made for a hot and somewhat unpleasant experience for daytime concert-goers. This site is now home to the Georgia Aquarium and the World of Coca-Cola museum. This led to a brief stay of two years after which the festival moved to the 42 acre (170,000 m²) location adjacent to the Atlanta Civic Center and now closed SciTrek. After finding this new home, the festival grew dramatically and attracted around 300,000 attendees during its peak years.

In 2000, the festival featured its largest show to date. They increased their stage amount to six and featured over 130 bands. [1] Although independent promoters when the festival was created, Cooley and Conlon sold their company, Concert/Southern Promotions, to Clear Channel Communications' subsidiary SFX Entertainment in 1998. In November 2004, Alex Cooley was released by Clear Channel Entertainment in part due to his unsuccessful assimilation into the corporate culture. His age and health problems ( diabetes) prevented him from working full-time which also played a role. 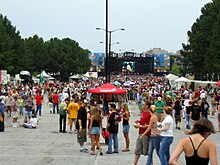 Traditionally on the first weekend in May, the 2005 festival was moved to June 10–12. This was supposedly done for better weather, although this ended up being counterproductive, as it put the festival into even more heat and humidity and at a greater risk for thunderstorms with dangerous lightning. Most of the 2005 festival was rained on by remnants of Tropical Storm Arlene, repeating many of the May rains it was rescheduled to avoid. Special outdoor tiles were put down in front of the stages to protect the grass and keep it from turning to mud.

The 2005 festival also doubled the talent budget and raised 3-day ticket prices from $45 to $75. Conlon cited media reports of potential traffic problems from Music Midtown and the concurrent Vibe MusicFest at the Georgia Dome as "killing" advance ticket sales in the weeks before the event. Others believe that the higher ticket prices may have exceeded the affordability of younger concert-goers. The slated 2005 dates were also concurrent with the increasingly popular Bonnaroo music and arts festival in neighboring Tennessee, which may have affected both attendance and artist booking.

On January 5, 2006, Conlon announced that there would be no Music Midtown in 2006 due to the growing expenses of the festival in its current form and location. Although Conlon left open the possibility of a return at a different location in the future, this ultimately left Music Midtown in limbo and on hiatus through 2010.

On July 6, 2011, Mayor Kasim Reed and Conlon announced that the festival would return for 2011 as a one-day event on September 24, 2011 at Piedmont Park. Ticket prices for the event were $55, with two stages and The Black Keys and Coldplay headlining. [2] Additional acts included Cage the Elephant, Manchester Orchestra, Young the Giant, The Joy Formidable and others. [3]

On September 21, 2011, Conlon said due to the success of advance ticket sales for 2011, he was already planning for a 2012 version of the festival. "Next year will definitely be two days, a little more diverse," he said. "I felt that getting something [produced] this year was important. It's gotten people focused again. But I'll start thinking about next year the week after this one. It takes a year to plan these things right." [4] Following the event, local media estimated attendance at 40,000. [5]

In 2015, a fourth stage was added to the summer festival. This year they spent almost in $18 million in production. They also donated $100,000 to the Piedmont Park Conservancy. According to the research center at the Nashville Area Chamber of Commerce, attendee spending brings over $11 million of income to Atlanta. [6]

In 2016, the creators decided to change the format of the festival. In previous years, the shows took place on Friday and Saturday. The new format moved the shows to Saturday and Sunday due to the large amount of traffic from the neighboring Henry W. Grady High School and the rush hour time period posing a risk. [6]

Panoramic view of The Meadow at Piedmont Park during Music Midtown 2018.

Saturday, 24 September 2011: Band of Skulls, Cage the Elephant, Coldplay, Manchester Orchestra, The Black Keys, The Constellations, The Joy Formidable, The Postelles, Walk the Moon, and Young the Giant. [17]