From Wikipedia, the free encyclopedia
This article is about the city. For the adjacent town, see Mosinee (town), Wisconsin.
City in Wisconsin, United States 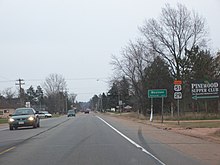 Mosinee is a city in Marathon County, Wisconsin, United States. It is part of the Wausau, Wisconsin Metropolitan Statistical Area. The population was 3,988 at the 2010 census. [4]

The traditional inhabitants of the area were the Ojibwe, the Potawatomi and the Menominee. [5] However, the name is the Hochunk Mōsį́nį, the "Cold Country," from mō, an old form of mą, meaning "earth, ground, land, country"; and sį́nį, "cold." [6] The Ojibwe ceded the territory to the United States in 1837 when they sold most of their land in what would become Wisconsin, though they were guaranteed the right to continue hunting, fishing, and gathering wild rice on the ceded lands. [7] Similarly, the Potawatomi gave up their land claims in Wisconsin in 1833, and the Menominee ceded territory in this area in the 1836 Treaty of the Cedars. [8] [9] These treaties coincided with the establishment of the first sawmill in the area by a white settler, John L. Moore, in 1836, and enabled white settlement to begin in the area. Lumber quickly became the most important industry and drew other businesses and settlers to the town, which at the time was known as Little Bull Falls. After the closing of Fort Winnebago in 1845, a number of Métis families moved to Little Bull Falls, and in 1857 the town was renamed in honor of an Ojibwe chief from the Wisconsin River Band. Deforestation led to the collapse of the lumber industry in the early 20th century, but it was quickly replaced by the paper industry. [10] In the neighboring Menominee language the town is called Mōsāpnīw, "he dwells alone there", which is likely a close approximation of the eponymous chief's name. [11]

The action was a part of an elaborate pageant organized by the Wisconsin Department of the American Legion. The "Communists" dragged Mayor Ralph E. Kronenwetter and Police Chief Carl Gewiss out of their beds. Mayor Kronenwetter surrendered at 10:15 AM in the town's new " Red Square" with a pistol to his back. The police chief was reported to have resisted and was "liquidated".

Roadblocks were set up around Mosinee, the library was "purged", prices of goods were inflated for the duration of the coup, and local restaurants served Russian black bread and potato soup for lunch. [14]

As he arrived at a rally to restore democracy to the community the night of May 1 Mayor Kronenwetter suffered a cerebral hemorrhage and never regained consciousness. He died five days later on May 6, 1950 at age 49. The mayor's doctor said the excitement and exertion probably contributed to his collapse.

Franklin Baker, commander of the local American Legion post, said, "It was a terrible coincidence." [15]

Local minister Will La Brew Bennett, 72, who, during the Communist invasion, demonstrated to the media how he would hide his Bible in the church organ if the Communists really invaded and was herded with other residents into a barbed-wire ringed " concentration camp" near "Red Square", was found dead in his bed hours after the mayor's death on May 7, 1950. [16]

There were 1,660 households of which 32.0% had children under the age of 18 living with them, 50.4% were married couples living together, 10.8% had a female householder with no husband present, 5.6% had a male householder with no wife present, and 33.1% were non-families. 27.5% of all households were made up of individuals and 10.9% had someone living alone who was 65 years of age or older. The average household size was 2.39 and the average family size was 2.89.

On October 24, 2018, the airport was the site of a Donald Trump "Make America Great Again" rally. Attendees lined up to gain entry to the rally up to 29 hours before the event was scheduled to begin. [21]

Joseph Dessert came from Canada to Mosinee (then known as "Little Bull Falls") in 1844. He built and equipped a free library for the community. Dedicated on February 11, 1899, the building was used as a library, as well as a post office, village hall, and school, and it was the scene of many community events, including dances and balls. The library was the only place in the community with theater facilities, so amateur plays were often presented there, and school commencements were held in the Grand Hall. The library existed as a city library until 1974, when the library and municipal boards recommended that the Joseph Dessert Library should join the Marathon County Public Library ( MCPL). Since then, it has also come to be known as the MCPL – Mosinee Branch.

Celebrations have marked two significant anniversaries for the library, the first in 1949 at the 50th anniversary, and the second in 1999 at the time of the library's 100th year. Several renovations have also taken place, with the most recent occurring in 1995 as part of a county-wide building and improvement program for libraries. Today, the library maintains its status in the City of Mosinee as both an important community service and as a building significant to the history of the community. The library building is listed on the National Register of Historic Places.