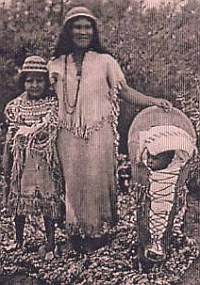 The Moapa are adept at basketry. They traditionally wore clothing made of hide, yucca fibers, and cliff-rose bark cloth.

The Moapa practiced irrigation agriculture before contact with Europeans. [3] The Moapa traded with the Spanish in the later 18th and early 19th centuries who arrived here from California and Arizona, yet no missions were built in the area.

In 1869 the United States relocated by force the Southern Paiute to the Moapa area. Originally the entire Moapa River watershed and lands along the Colorado River (some of which area is now under Lake Mead) was assigned to the Moapa; however, in 1875 their reservation was reduced to 1,000 acres (400 ha).

They later suffered from decimation by disease in the 1920s and 1930s.

In 1941, they organized with a formal constitution. In 1980 the Moapa River reservation was expanded, with about 75,000 acres (30,000 ha) added. People on the reservation continue to suffer high rates of unemployment, and diabetes, resulting in some of the Moapa migrating to other parts of the country to find work.

Their reservation is the Moapa River Indian Reservation, located near Moapa Town, Nevada.