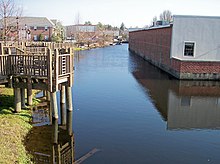 A pedestrian boardwalk parallels the Mispillion River in Milford

Walnut Street in Milford in 2006

Milford is a city in Kent and Sussex counties in the U.S. state of Delaware. According to the 2010 census, the population of the city is 9,559. [4]

According to the United States Census Bureau, the city has a total area of 9.87 square miles (25.6 km2).

The Kent County side of Milford was first settled in 1680 by Henry Bowan on what was known as the Saw Mill Range. A century later the Reverend Sydenham Thorne built a dam across the Mispillion River to generate power for his gristmill and sawmill. Around the same time, Joseph Oliver laid out the first city streets and plots nearby on a part of his plantation. Soon a number of homes and businesses appeared along Front Street. The city was incorporated February 5, 1807. [9]

In the 1770s, a ship building industry was already flourishing on the Mispillion River. Shipbuilding continued to be the major industry of Milford through World War I, bringing considerable prosperity to the town. The high point came in 1917 when the four-masted, 174-foot (53 m) long Albert F. Paul was launched from the William G. Abbott shipyard. At one point six shipyards were operating in the downtown area. When the last of the area's giant white oaks was cut in the 1920s, the shipyards quickly went out of business, although the Mispillion ships sailed on for many years. (The Paul was sunk by a German torpedo in 1942 while sailing from the Bahamas.) The Vineyard shipyard was called into service in both World War I and II to build submarine chasers. [9]

During much of the twentieth century Milford served primarily as the commercial center for much of southern Delaware's large agricultural community. [9]

On Friday, May 30, 2003 at approximately 3:00 p.m. a fire started in a second floor apartment next to Wiley Hardware & Appliance on Walnut Street in the historic downtown section of Milford. More than 200 firefighters from Milford, Ellendale, Harrington, Felton, Dover, Smyrna, Houston, Frederica, Slaughter Beach, Bowers Beach, Greenwood, South Bowers, Farmington, Magnolia, Cheswold, Lewes, Georgetown, and Bridgeville in Delaware and Greensboro and Goldsboro in Maryland fought the blaze which destroyed seven businesses, a church, and three apartments, destroying an entire city block in the historic section of town. No one was killed in the blaze, but one civilian and six firefighters were injured. [11]

The median household income according to the 2010 census is $52,274, and the median family income is $59,365. 13.1% of families are below poverty level, which is slightly higher than the national average of 11.5%, and higher than the Kent County and Sussex County average of 9.7% and 9.1% respectively.

The City of Milford Electric Department provides electricity to the city, operating a substation and over 100 miles (160 km) of overhead lines and over 50 miles (80 km) of underground lines. [17] The city's electric department is a member of the Delaware Municipal Electric Corporation (DEMEC) and purchases its power from the PJM Power Grid. The City of Milford Electric Department serves about 6,500 customers. [18] The Public Works department provides trash and recycling collection to Milford. [19] [20] The Engineering department provides water and sewer service to the city. The city's water system draws from groundwater with 4 well facilities that each consist of 11 wells. [21] Natural gas service in Milford is provided by Chesapeake Utilities. [22]

Milford is home to the Milford Solar Farm, a 15 MW, 80 acre solar power farm that is owned by the Public Service Enterprise Group and is the largest solar power farm in Delaware. DEMEC purchases the power generated from the solar farm. [23]

Bayhealth Medical Center operates the Bayhealth Hospital, Sussex Campus in Milford. [24] The hospital offers various inpatient services include a birthing room and cardiovascular and cancer services. The Sussex Campus also offers numerous outpatient services, patient and family support services, community outreach, and imaging services. The hospital has a 24-hour emergency room with a Level III trauma center. [25] [26] On May 27, 2016, Bayhealth Medical Center broke ground on the Bayhealth Sussex Campus to replace the former Milford Memorial Hospital. The six-story hospital cost between $275 million and $300 million to build. [27] Bayhealth Sussex Campus opened on February 5, 2019. [28] Milford Memorial Hospital will be converted by Nationwide Health Services into a multi-use healthcare-focused community that would include a nursing home. [29]