MiamiCentral is a mixed-use railroad station development in the Government Center district of Downtown, Miami, Florida. Currently, the station serves an inter-city rail service named Brightline (briefly known as Virgin Trains USA) and connects to the adjacent Government Center station serving Metrorail, Metromover, and bus lines. In the next few years, the station will serve Tri-Rail commuter rail. The 9-acre (3.6 ha) complex also includes 3 million square feet (280,000 m2) of residential, office, commercial, and retail development. [3] The station was built by All Aboard Florida, a subsidiary of Florida East Coast Industries (FECI) overseeing Brightline. MiamiCentral was designed by Skidmore, Owings & Merrill in association with Zyscovich Architects. [4] Its name was changed from MiamiCentral to Virgin MiamiCentral on April 4, 2019. [5] Despite the end of Brightline's licensing agreement with Virgin Group, [6] the station's website still uses Virgin branding as of 2020 August 13, [update] but in a Brightline press release, Brightline said in a statement all ties were cut with Virgin and all of their assets will no longer be under the Virgin name.

MiamiCentral was originally a railroad station opened April 15, 1896 as the southern terminus of Henry Flagler's Florida East Coast Railway (FEC). The station was the southern end of the FEC line until 1905, when construction began to Key West via the Overseas Railroad. The FEC built a wooden passenger station building in 1912 at site of what would become the Dade County Courthouse. [7] Construction on the courthouse was started in 1925 and finished 1928. Seaboard Air Line Railroad intercity passenger rail started service at the location in 1927. FEC and Seaboard both regularly serviced the site until January 23, 1963, when union workers for both companies went on strike. [8] [9]

At the insistence of the City of Miami, which had long fought to get rid of the tracks in the downtown section just north of the county courthouse, the downtown passenger terminal was demolished by November 1963. [10] Although a new station was planned at the Buena Vista yard near North Miami Avenue and 36th Street ( US 27), [9] it was never built. The site of the old station was left as parking lots until construction of MiamiCentral began in 2014.

When FEC ended their passenger service, this left Seaboard Coast Line Railroad (service absorbed by Amtrak in 1971) as the sole intercity rail in Miami. They operated out of the decaying Allapattah terminal at Northwest 22nd Street and Seventh Avenue ( US 441) until in 1978 Amtrak moved to its current location near Hialeah. [11] 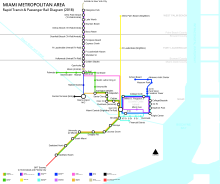 Schematic of rapid transit and passenger rail service in the Miami metropolitan area in 2017. The Tri-Rail Downtown Miami Link is scheduled to be operational in 2020.

In March 2012, All Aboard Florida, a former subsidiary of Florida East Coast Industries that also at the time owned the Florida East Coast Railway, announced plans to connect Miami and Orlando with Higher-speed passenger rail service. [12] In May 2014, All Aboard Florida unveiled their plans for the 9-acre (3.6 ha) site, with construction anticipated to begin in late 2014. The company planned to build two tracks on either side of an island platform 50 feet (15 m) above street level and 3 million square feet (280,000 m2) of transit-oriented development, with retail shops at street level and hotel rooms, housing and office space occupying towers above the station. [13] [14]

In August 2014, preparatory work began with the removal of parking lots that had previously been located on the site. [15] Construction of the facility began in mid 2015, when subterranean support pilings began to be built, and by the end of the year foundation and frame construction was underway. [16] By October 2016, construction of the rail facility was about 70% complete, while work on the lower structure of the office and residential buildings had begun. [17] When Brightline began revenue operations in January 2018 between West Palm Beach and Fort Lauderdale, MiamiCentral was still incomplete. [18] Service to Miami was planned to begin at the end of April 2018. [19] Brightline service to MiamiCentral commenced on May 19, 2018. [1]

The Tri-Rail commuter service is investing 70 million at the station in the "Tri-Rail Downtown Miami Link" project. [23] The opening has been moved to 2019 which comes from Tri-Rail to use rails from the FEC corridor in the section up to station. Regulations require a working PTC systems for that while Florida East Coast Industries has not submitted the necessary application yet.[ needs update?] As the Florida Railroad Administration has up to 180 days for a first response, officials do not expect test runs of Tri-Rail into the new station before the end of 2018. [24] On the other hand, Brightline trains can reach their single platform without an approved track field. [25]

Tracks 4 and 5, along with Platforms D and E, are expected to open in conjunction with Tri-Rail's Downtown Miami Link service.