Metro Rail is owned and operated by the Los Angeles County Metropolitan Transportation Authority (Metro) and started service in 1990. It has been extended significantly since that time and several further extensions are either in the works or being considered. The system served a ridership of 344,176 on an average weekday in 2018.

Los Angeles had two previous rail transit systems, the Pacific Electric Red Car and Los Angeles Railway Yellow Car lines, which operated between the late 19th century and the 1960s. The Metro Rail system utilizes many of their former rights-of-way, and thus can be considered their indirect successor.

In Los Angeles Metro terminology, common with most other metro systems, a line is a named service, defined by a route and set of stations served by trains on that route. (The word does not refer to a physical rail corridor, as it does in New York City Subway nomenclature.) Metro Rail lines are for the most part named after colors, and these colors are used to distinguish the lines on Metro's maps. (The one exception is the Expo Line, which nevertheless is consistently colored aqua on maps.) Metro also uses colors for its Metro Busway services (which are bus services operating in transitways).

As of late 2019, Metro is in the process of renaming all of its rail and BRT lines with letters, while leaving their colors unchanged on maps. [1]

The B and D lines follow a fully underground route ( subway), and the C Line follows a fully grade separated route. The A, E and L Line routes run in a mix of environments, including at-grade street running, at-grade in an exclusive corridor, elevated, and underground. [2] 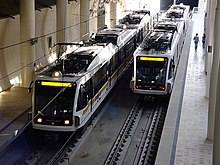 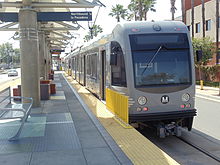 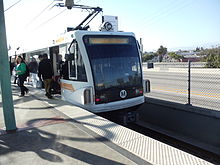 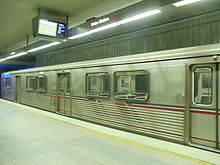 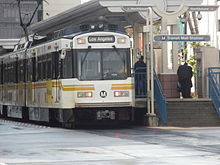 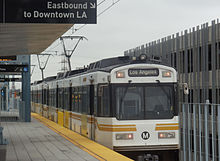 Stations are unstaffed during regular hours. Call boxes are available at most stations to allow employees at the Metro Rail Operations Control Center to assist passengers with concerns.

Metro Rail uses a proof-of-payment fare system, with Metro's fare inspectors randomly inspecting trains and stations to ensure passengers have a valid fare product on their Transit Access Pass (TAP) electronic fare card. When passengers enter a station, they encounter TAP card validators which collect fares when a customer places their card on top. Additionally, fare gates ( turnstiles) connected to TAP card validators are at all underground stations, all elevated stations and some surface stations. Once passengers pass these validators or board a train, they have entered the "fare paid zone," where fare inspectors may check their TAP card to ensure they have a valid fare.

Underground stations are typically large in size with a mezzanine level for fare sales and collection above a platform level where passengers board trains.

Street-level stations are typically more simple with platforms designed with shade canopies, separated from nearby roads and sidewalks, where passengers can purchase fares and board a train.

Subway stations and tunnels are designed to resist ground shaking that could occur at a specific location, but there is no general magnitude of earthquake that the entire system is expected to withstand. [4] The Metro Rail system has not suffered any damage due to earthquakes since its opening in 1993.

Some suburban stations have free or paid park and ride lots available and most have bike storage available.

Between the system's opening in 1990 and February 2020, Metro Rail lines ran regularly between 5:00 am and midnight, seven days a week. Limited service on particular segments was provided after midnight and before 5:00 am. On Friday and Saturday evenings, service operated until approximately 2:00 am. There was no rail service between 2:00 am and 3:30 am, except on special occasions such as New Year's Eve. Service operated every 5–10 minutes during the peak period, every 10–15 minutes during middays and during the day on weekends, and every 20 minutes during the evening until the close of service. Exact times varied from route to route.

The standard Metro base fare applies for all trips. Fare collection is based on a partial proof-of-payment system. At least two fare machines are at each station. Fare inspectors, local police and deputy sheriffs police the system and cite individuals without fares. Passengers are required to purchase a TAP card to enter stations equipped with fare gates. Passengers using a TAP card can transfer between Metro routes for free within 2 hours from the first tap.

The following table shows Metro fares, effective May 15, 2018 (in US dollars):

Metro has implemented a system of electronic fare collection using a stored value smartcard called the Transit Access Pass (or TAP Card). This card was intended to simplify fare collection and reduce costs. [5] In 2012, paper monthly passes were phased out and replaced with the TAP Card. As of September 2013, first-time Metro riders must deposit an additional $2 (or $1 at TAP vending machines) on top of their first fare payment to obtain a reloadable TAP Card.

In addition, Metro began installing fare gates in 2008, at all heavy rail stations and select light rail stations. Implementation of both programs (the TAP Card and the fare gate program) has turned out to be expensive ($154 million in total, so far) and its initial rollout was problematic. [6]

As of the second quarter of 2018, the combined Metro B and D lines averaged a weekday ridership of 135,400, making it the ninth busiest heavy rail ( rapid transit) system in the United States. [8] Taking overall track length into consideration, Metro Rail's heavy rail lines transport 7,960 passengers per route mile, making this the fifth busiest system U.S. rapid transit system on a per mile basis.

In the early 20th century, Southern California had an extensive privately owned rail transit network with over 1,000 miles (1,600 km) of track, operated by Pacific Electric (Red Cars) and Los Angeles Railway (Yellow Cars). [12] However, from 1927 revenue shortfall caused Pacific Electric to begin replacing lightly used rail lines with buses. In 1958 the remnants of the privately owned rail and bus systems were consolidated into a government agency known as the Los Angeles Metropolitan Transit Authority or MTA. By 1963 the remaining rail lines were completely removed and replaced with bus service.

In the following decades, growing traffic congestion led to increased public support for rail transit's return. Beginning in the 1970s, a variety of factors, including environmental concerns, an increasing population and the price of gasoline led to calls for mass transit other than buses. The Los Angeles County Metropolitan Transportation Authority (LACMTA, now branded as Metro) began construction of the initial lines throughout the 1980s using revenues from a voter-approved increase in sales tax. The Blue (A) Line finally opened on July 14, 1990, some 27 years after the final streetcar line closed. Since that date, the system has been developed to its current size. The following table shows this expansion's timeline: 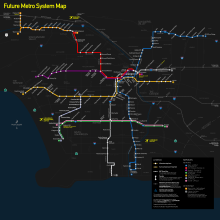 Service patterns planned upon completion of the Regional Connector, with lettered lines

Metro has worked to plan and prioritize project funding and implementation. Metro's 2009 Long Range Transportation Plan (LRTP) was developed to provide a long-term vision of transportation system development for the next 30 years. [15] Metro is currently attempting to update the LRTP 2009 plan citing new housing trends and fiscal changes. Metro plans to release the updated LRTP in early 2020. [16][ non-primary source needed]

Beginning in 2014, Metro saw its ridership numbers begin to decline. Many explanations exist for the decline, including safety concerns, an increase in ride-hailing service usage, and low-income housing opportunities drying up in L.A. because of the increase in rents, a shortage of housing. [17]

The fiscal changes are the passage of Measure R, a countywide incrememental sales tax increase passed by voters in 2008, provides funding for many of the highest priority projects in the LRTP. [18][ non-primary source needed] On November 6, 2012, Metro attempted to pass Measure J, [19] but failed as it did not reach the two-thirds majority needed to pass. [20] [21]

In November 2016 election, Metro decided to place another sales tax on the ballot. The voters then approved Measure M, a half-cent permanent sales tax increase, to fund many local projects, including Metro Rail expansion. [22]

In 2018, Metro approved renaming its rail lines using a letter-based scheme, similar to those in New York City. [23] [24] Metro recommended the opening of the refurbished A Line in 2019 as a starting point to rename the lines, [25] and then continuing with the opening of the Crenshaw/LAX line, finishing in time for the opening of the Regional Connector in 2022. [26][ non-primary source needed]

The following rail projects have been given high priority by Metro. They all appear in the 2009 LRTP constrained plan, [15] and all have funding earmarked from Measure R. [18] [27] With the passage of Measure M in 2016, Metro released an updated Long Range Transportation plan in February 2017, and will release a full report early 2020, along with its Twenty-eight by '28 initiative. [28]

The following proposed line/system expansions do not have funding or high priority in Metro's long-range plans. Some are listed as "strategic unfunded" in the last Long Range Transportation Plan, indicating some possibility they could be constructed should additional funding materialize. Others have been the subject of Metro Board discussion, with the possibility of future feasibility studies. (More information on each project can be found in the references.)

Note a major update of Metro's 2009 plan is underway, updating the Long Range Transportation Plan. The results of early planning studies as a part of that process are expected to be made public in approximately early 2020, and may result in the addition of new proposed projects, changes to concepts listed below, and the removal of concepts whose popularity has declined since 2009.