From Wikipedia, the free encyclopedia
Sachem of the Wampanoag Indians

Metacom (1638 – August 12, 1676), also known as Pometacom, [1]:205 Metacomet, and by his adopted English name King Philip, [2] was sachem (elected chief) to the Wampanoag people and the second son of the sachem Massasoit. Metacom became sachem in 1662 when his brother Wamsutta (or King Alexander) died shortly after the death of their father. Wamsutta's widow Weetamoo (d. August 6, 1676), squa sachem (a female chief) of the Pocasset, was Metacom's ally and friend for the rest of his life. Metacom married Weetamoo's younger sister Wootonekanuske.[ citation needed] It is unclear how many children they had or what happened to them. Wootonekanuske and one of their sons were sold to slavery in the West Indies following the defeat of the Native Americans in what became known as King Philip's War.[ citation needed]

Initially, Metacom sought to live in harmony with the colonists. As a sachem, he took the lead in much of his tribes' trade with the colonies. He adopted the European name of Philip, and bought his clothes in Boston, Massachusetts.[ citation needed]

The colonies continued to expand. To the west, the Iroquois Confederation also was fighting against neighboring tribes in the Beaver Wars, pushing them from the west and encroaching on Metacom's territory. Finally, in 1671, the colonial leaders of the Plymouth Colony forced major concessions from him. Metacom surrendered much of his tribe's armament and ammunition, and agreed that they were subject to English law. The encroachment continued until hostilities broke out in 1675. Metacom led the opponents of the English, with the goal of stopping Puritan expansion.[ citation needed]

In the spring of 1660 Metacom's brother Wamsutta appeared before the court of Plymouth to request that he and his brother be given English names in accordance with Wampanoag custom, in which new names marked significant moments in time (such as, in this case, Wamsutta's father's death). The court agreed and Wamsutta had his name changed to Alexander, and Metacom's was changed to Philip. Author Nathaniel Philbrick has suggested that the Wampanoag may have taken action at the urging of Wamsutta's interpreter, the Christian neophyte John Sassamon. [3] Metacom was later called "King Philip" by the English.

King Philip used tribal alliances to coordinate efforts to push European colonists out of New England. Many of the native tribes in the region wanted to push out the colonists following conflicts over land use, diminished game as a consequence of expanding European settlement, and other tensions.

As the colonists brought their growing numbers to bear, King Philip and some of his followers took refuge in the great Assowamset Swamp in southern Massachusetts. He held out for a time, with his family and remaining followers.

Hunted by a group of rangers led by Captain Benjamin Church, King Philip was fatally shot by a praying Indian named John Alderman, on August 12, 1676, in the Misery Swamp near Mount Hope in Bristol, Rhode Island. After his death, his wife and nine-year-old son were captured and sold as slaves in Bermuda. Philip's head was mounted on a pike at the entrance to Plymouth, Massachusetts, where it remained for more than two decades. His body was cut into quarters and hung in trees. [4] Alderman was given Philip's right hand as a trophy. 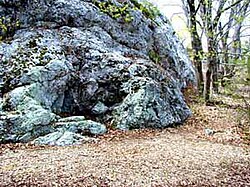 Numerous places are named after Metacomet:

One insect species is named after Metacomet: