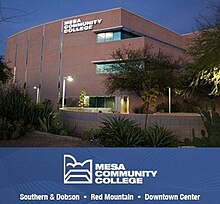 MCC was launched by Mart Godinez in 1963 as an extension branch of Phoenix College and was located at 809 W. Main Street in Mesa. There were 330 students registered for classes the first semester at Mesa Extension on September 11, 1963. Mesa students voted Hokams as the nickname for their athletic teams in 1964. Capital funds from the bond election in 1964 enabled Mesa Community College to purchase 120 acres, with an option to purchase an adjoining 40 acres, for the new campus at Dobson and Southern Roads in Mesa. On April 12, 1965 the Maricopa Junior College District Board named Mesa Community College and Glendale Community College as separate institutions from Phoenix College. Mesa Community College graduated its first class on its new campus in ceremonies May 29, 1968. In 1974, MCC’s mascot changed from Hokam to Thunderbird. Bar code technology came to the library in 1987 as part of a new automation system. Bar codes were assigned to every item in the library’s collection, and appeared on student ID cards for the first time.

The college has two comprehensive campuses and additional locations to serve students.

The Arizona Gakuen School (アリゾナ学園 Arizona Gakuen), a weekend supplementary Japanese school, holds its classes at the Mesa Community College Southern and Dobson campus. The school office is in Tempe. [1]

MCC is accredited by the Higher Learning Commission.

The college athletics teams are nicknamed the Thunderbirds.