Melbourne /ˈmɛlbərn/ is a city in Brevard County, Florida, United States. As of the 2010 census, the population was 76,068. [4] The municipality is the second-largest in the county by both size and population. [8] Melbourne is a principal city of the Palm Bay – Melbourne – Titusville, Florida Metropolitan Statistical Area. In 1969 the city was expanded by merging with nearby Eau Gallie. [9]

Evidence for the presence of Paleo-Indians in the Melbourne area during the late Pleistocene epoch was uncovered during the 1920s. C. P. Singleton, a Harvard University zoologist, discovered the bones of a mammoth ( Mammuthus columbi) on his property along Crane Creek, 1.5 miles (2.4 km) from Melbourne, and brought in Amherst College paleontologist Frederick B. Loomis to excavate the skeleton. Loomis found a second elephant, with a "large rough flint instrument" [10] among fragments of the elephant's ribs. Loomis found in the same stratum mammoth, mastodon, horse, ground sloth, tapir, peccary, camel, and saber-tooth cat bones, all extinct in Florida since the end of the Pleistocene 10,000 years ago. At a nearby site a human rib and charcoal were found in association with Mylodon, Megalonyx, and Chlamytherium (ground sloth) teeth. A finely worked spear point found with these items may have been displaced from a later stratum. In 1925 attention shifted to the Melbourne golf course.

A crushed human skull with finger, arm, and leg bones was found in association with a horse tooth. A piece of ivory that appeared to have been modified by humans was found at the bottom of the stratum containing bones. Other finds included a spear point near a mastodon bone and a turtle-back scraper and blade found with bear, camel, mastodon, horse, and tapir bones. [11] Similar human remains, Pleistocene animals and Paleo-Indian artifacts were found in Vero Beach, 30 miles (48 km) south of Melbourne, and similar Paleo-Indian artifacts were found at the Helen Blazes archaeological site, 10 miles (16 km) southwest of Melbourne.

After the Civil War, pioneer families arrived, and Melbourne was founded in 1867.

The city, formerly called "Crane Creek", [14] was named Melbourne in honor of its first postmaster, Cornthwaite John Hector, an Englishman who had spent much of his life in Melbourne, Victoria, Australia. [15] He is buried in the Melbourne Cemetery, along with many early residents in the area. The first school in Melbourne was built in 1883 and is on permanent exhibit on the campus of Florida Institute of Technology. By 1885, the town had 70 people. [16] The Greater Allen Chapel African Methodist Episcopal Church was founded in 1885 and is still active. [17]

In the late 1890s, the Brownlie-Maxwell Funeral Home opened and it is still in business. The oldest black-owned business in the county is Tucker's Cut-Rate plumbing. It opened in 1934. [18]

In the early 1900s, houses were often built in the frame vernacular style. [19]

During the Jim Crow years, black people were required to enter movie theaters via a different entrance from whites and sit in the balcony. Gas stations had signs for rest rooms labeled "Men", "Women", and "Colored." This persisted until integration in the late 1960s. [22]

In late 1942 the Naval Air Station Melbourne was established as a site to train newly commissioned Navy and Marine pilots for World War II. The program ran until 1946, and the land that was used for that program makes up most of what is currently the Orlando Melbourne International Airport. [23]

In 1969, the cities of Eau Gallie and Melbourne voted to merge, forming modern-day Melbourne. [9]

In the 1950s, Babcock Street was extended north to intersect with US 1. The Melbourne Shopping Center was constructed on Babcock, the area's first strip mall. Consumers were sufficiently attracted to this new mall, that the traditional downtown, off New Haven, suffered. Urban blight was successfully attacked there in the 1980s. [24]

A board was created by the legislature to spend a 10% tax on electric bills. This was used by the Melbourne Civic Improvement Board to build the Melbourne Auditorium, the first library and fire station, and various parks. The board was dissolved when Melbourne was merged with Eau Gallie in 1969. [24] That merger doubled the size of Melbourne. [25]

In 1969, the city elected Julius Montgomery, its first black councilman. Montgomery was also the first African American student of Brevard Engineering College, later Florida Institute of Technology which named their Pioneer Award after him. Montgomery was also the first African American professional hired by NASA at the Kennedy Space Center in 1956. His accomplishments are recounted in the chapter "A Man of Firsts" in the book We Could Not Fail by Richard Paul and Steven Moss. [27] [28]

A 2009 Halloween street party sponsored by a downtown restaurant attracted an estimated 8,000–10,000 people. This overwhelmed the downtown area. Street parties were curtailed until public safety issues were addressed. [30]

On February 18, 2017, president Donald J. Trump held his first post-inauguration rally at the Orlando-Melbourne International drawing a crowd of 9,000. [31]

The east-west street named Brevard Drive was historically the "center" of town; with addresses called "north" and "south" of this street. The north-south Babcock Street provided the same centerline for "east" and "west" directions.

Melbourne Beachside has a small presence on the South Beaches barrier island. It is often confused with Melbourne Beach, a separate political entity.

Melbourne averages 49 inches (1,200 mm) of rainfall annually, much of it coming in convective thunderstorms in the late May to early October time period. The record rainfall occurred on August 20, 2008, when Tropical Storm Fay dropped 18.21 inches (463 mm). [33] Melbourne can sometimes have moderate to severe drought conditions from late fall through spring, with brush fires occurring and water restrictions put in place. The National Weather Service located at Melbourne International Airport averages 2.9 days per year with frost, although several years might pass without a frost in the city of Melbourne or at the ocean beaches. According to the National Weather Service, there is no record of snow or snow flurries in the city of Melbourne in the last 150 years.[ citation needed] On Christmas Eve 2003 the city as others in east central coast of Florida received snow from the ocean effect, when cold air passes over the considerably hotter ocean and causes the rise of air with higher temperature to bring moisture into the higher portions of the atmosphere. On the day temperatures dropped to below 30-20 °F. [34]

Tropical flora typical of more southerly locations is grown in the Melbourne area (coconut palms, royal palms, Christmas palms, and bananas), but can be damaged or killed when subjected to infrequent light freezes or cooler temperatures, although several years might pass without a freeze in the Melbourne area. The Melbourne area has many lush gardens and public landscapes, and is noted for the botanical northern limit of cultivated coconut palms on the Florida East Coast.

The Florida Department of Environmental Protection has ordered the city to reduce pollution of the Indian River Lagoon, which it borders; about 80% of the city's landmass drains in the direction of the lagoon. The city must reduce run-off by 44,000 pounds (20,000 kg) of nitrogen and 13,000 pounds (5,900 kg) of phosphorus. The city responded by banning the use of fertilizer before flood and storm warnings. [36] 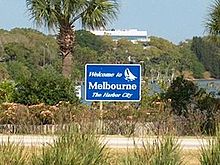 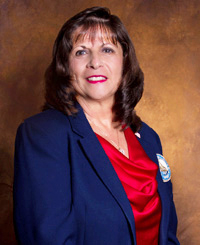 The Melbourne City Council consists of the mayor and six district council members. [39] [40] Melbourne uses a Council-Manager form of government. [41]

The following are appointed by the council:

Melbourne city officials created the Babcock Street Redevelopment District in 1998 to stimulate new development along Babcock Street from U.S. 1 south to U.S. 192. A 218-unit apartment complex built in 2005 is most recent step in an effort to revitalize this area.

In 2010, Melbourne began supporting the Eau Gallie Arts District as a Florida Main Street. Established in 1860 along the Indian River, the arts district (now called EGAD!) has proven to be highly successful in its redevelopment of the community of art galleries, shops, restaurants, Melbourne's first microbrewery (Intracoastal Brewing Company), and contains the city civic center and public library with a public pier, Foosaner Art Museum, FIT, Historic Rossetter House and Gardens, Pineapple Park, several businesses over 40 years old, and a community park and band shell, which is the heart and soul of many community activities.

A 2011 study rated the general pension fund for city employees highly at 190%. Less favorably rated were the pension plans for fire and police employees. [45]

A 2009 survey indicated that the city was ranked 84 out of 400 in crime statistics, with #1 being the worst. Crimes included murder, rape, robbery, aggravated assault, burglary, and motor vehicle theft. [47]

The Commander of the Patrol Division is responsible for all patrol functions. This includes the use of the police K-9 unit.[ citation needed]

A Commander is responsible for the Public Information Office.[ citation needed]

Under the Special Operations Division, there are specialty units such as SWAT, Dive Recovery Team, Marine Patrol Unit, and the Crisis negotiation Team.[ citation needed]

There are designated marine patrol officers who are assigned to waterway patrols. Some of the call-outs are completed in conjunction with other agencies, including the Brevard County Sheriff's Office and the Coast Guard. The Department may also be called upon to deal with homeland security issues related to the two main causeways in Melbourne, and can be involved in port and inlet security activities including the boarding of suspicious boats. Marine activities include patrols of canals in order to provide a police presence for homeowners and decrease waterfront crimes.[ citation needed]

Orlando Melbourne International Airport is located near the center of the city. Melbourne contains defense and technology companies with a high concentration of high-tech workers. [48] The following corporations have operations in Melbourne:

In 2009, Forbes ranked the area 18th out of 100 Metropolitan Statistical Areas and first out of 8 metros in Florida for affordable housing, and short commute times, among others. [56]

Melbourne has two downtown business districts, a result of the merger of Eau Gallie into Melbourne:

In February or March:

Museums and points of interest

There are three places on the National Register of Historic Places: [67]

The following places also are historic:

EAU GALLIE Arts District has an established historical walking tour that includes over 20 historical buildings or locations in the arts district.

Melbourne was an official host city for the 1996 Olympic Torch Relay. [68]

There are co-ed adult and youth sports programs in flag football and ultimate frisbee. [69] 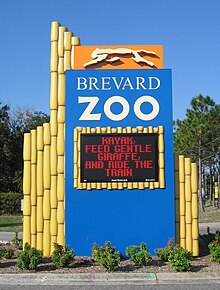 One of the many forms of recreation is local fishing in places such as Lake Washington. [73]

Public schools are run by the Brevard County School Board.

Prior to 1964, segregated schools were maintained for white students and black students under the doctrine of Separate but equal education. Black students were educated at Melbourne Vocational School from 1921 until it burned in 1953. For the next five years they met in the former hospital of the Naval Air Station, until Stone High School was opened in 1958. In 1964 the schools were integrated and Stone was repurposed as Stone Middle School. [74]

WFIT 89.5 FM—this radio station is an NPR station based on the grounds of Florida Institute of Technology

Melbourne is part of the Orlando television market. Cable is provided by Spectrum.

Roads in the older part of the city, in what is today the southeast, are oriented toward the north-south road, Babcock Street, with compass directions measured east and west from that road. In the same area, the east-west road, Brevard Drive, separates compass directions north and south.

All are at least four-lane roads, unless otherwise designated.

The Union Cypress Company Railroad ran east to west through south Melbourne in the early 1900s. The mill town of Hopkins was near the present-day streets of Mill Street and Main Street.

The Florida East Coast Railway runs through Melbourne, staying west of U.S. 1 through its entire run. It operated passenger service between Jacksonville and the Miami area until 1968.

Internet service providers in Melbourne range from various 56 kbit/s providers, AT&T (formerly BellSouth) FastAccess DSL, and Spectrum cable internet. Fiber-optic networks are installed in the city mainly for business purposes and have not been integrated for home use.

Melbourne Square, in the city of Melbourne, located on US 192 west of downtown, is the largest shopping area in Brevard County.[ citation needed] In the 1960s, the motto of Melbourne was, "Crossroads to the Universe".