Distribution of Melanesians according to Meyers Konversations-Lexikon

Melanesians are the predominant and indigenous inhabitants of Melanesia, in a wide area from Maluku Islands and New Guinea to as far east as the islands of Vanuatu and Fiji. Most speak either one of the many languages of the Austronesian language family, especially ones in the Oceanic branch, or from one of the many unrelated families of Papuan languages. Other languages are the several creoles of the region, such as Tok Pisin, Hiri Motu, Solomon Islands Pijin, Bislama, and Papuan Malay. [1]

The original inhabitants of the group of islands now named Melanesia were likely the ancestors of the present-day Papuan people. Migrating from Africa, they appear to have occupied these islands as far east as the main islands in the Solomon Islands, including Makira and possibly the smaller islands farther to the east. [3]

Particularly along the north coast of New Guinea and in the islands north and east of New Guinea, the Austronesian people, who had migrated into the area more than 3,000 years ago, [4] came into contact with these pre-existing populations of Papuan-speaking peoples. In the late 20th century, some scholars theorized a long period of interaction, which resulted in many complex changes in genetics, languages, and culture among the peoples. [5] It was proposed that, from this area, a very small group of people (speaking an Austronesian language) departed to the east to become the forebears of the Polynesian people. [6] The indigenous Melanesian populations are thus often classified into two main groups based on differences in language, culture or genetic ancestry: the Papuan-speaking and Austronesian-speaking groups. [7] [8] 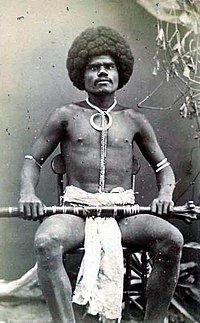 This Polynesian theory was overturned by a 2008 study, which was based on genome scans and evaluation of more than 800 genetic markers among a wide variety of Pacific peoples. It found that neither Polynesians nor Micronesians have much genetic relation to Melanesians. Both groups are strongly related genetically to East Asians, particularly Taiwanese aborigines. [4] It appeared that, having developed their sailing outrigger canoes, the ancestors of the Polynesians migrated from East Asia, moved through the Melanesian area quickly on their way, and kept going to eastern areas, where they settled. They left little genetic evidence in Melanesia, "and only intermixed to a very modest degree with the indigenous populations there". [7] Nevertheless, the study still found a small Austronesian genetic signature (below 20%) in less than half of the Melanesian groups who speak Austronesian languages, and which was entirely absent in the Papuan-speaking groups. [4] [7]

The study found a high rate of genetic differentiation and diversity among the groups living within the Melanesian islands, with the peoples not only distinguished between the islands, but also by the languages, topography, and size of an island. Such diversity developed over the tens of thousands of years since initial settlement, as well as after the more recent arrival of Polynesian ancestors at the islands. Papuan-speaking groups in particular were found to be the most differentiated, while Austronesian-speaking groups along the coastlines were more intermixed. [4] [7]

Further DNA analysis has taken research into new directions, as more human species have been discovered since the late 20th century. Based on his genetic studies of the Denisova hominin, an ancient human species discovered in 2010, Svante Pääbo claims that ancient human ancestors of the Melanesians interbred in Asia with these humans. He has found that people of New Guinea share 4%–6% of their genome with the Denisovans, indicating this exchange. [9] The Denisovans are considered cousin to the Neanderthals. Both groups are now understood to have migrated out of Africa, with the Neanderthals going into Europe, and the Denisovans heading east about 400,000 years ago. This is based on genetic evidence from a fossil found in Siberia. The evidence from Melanesia suggests their territory extended into south Asia, where ancestors of the Melanesians developed. [9]

Melanesians of some islands are one of the few non-European peoples, and the only dark-skinned group of people outside Australia, known to have blond hair. The blonde trait developed via the TYRP1 gene, which is not the same gene that causes blondness in European blonds. [10]

Early European explorers noted the physical differences among groups of Pacific Islanders. In 1756 Charles de Brosses theorized that there was an 'old black race' in the Pacific who were conquered or defeated by the peoples of what is now called Polynesia, whom he distinguished as having lighter skin. [11]:189–190 By 1825 Jean Baptiste Bory de Saint-Vincent developed a more elaborate, 15-race model of human diversity. [12] He described the inhabitants of modern-day Melanesia as Mélaniens, a distinct racial group from the Australian and Neptunian (i.e. Polynesian) races surrounding them. [11]:178

In 1832 Dumont D'Urville expanded and simplified much of this earlier work. He classified the peoples of Oceania into four racial groups: Malayans, Polynesians, Micronesians, and Melanesians. [13]:165 D'Urville's model differed from that of Bory de Saint-Vincent in referring to 'Melanesians' rather than 'Mélaniens.'

Bory de Saint-Vincent had distinguished Mélaniens from the indigenous Australians. Dumont D'Urville combined the two peoples into one group. 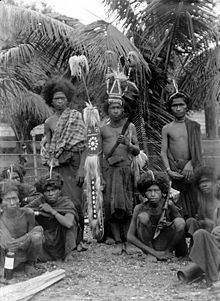 Lamaholot people from Flores island, Indonesia. Many of the present Southern Mongoloid populations of Indonesia, the Philippines, and Malaysia (including Singapore) also have a high degree of Australo-Melanesian genetic heritage. [14]

Soares et al. (2008) have argued for an older pre- Holocene Sundaland origin in Island Southeast Asia (ISEA) based on mitochondrial DNA. [15] The "out of Taiwan model" was challenged by a study from Leeds University and published in Molecular Biology and Evolution. Examination of mitochondrial DNA lineages shows that they have been evolving in ISEA for longer than previously believed. Ancestors of the Polynesians arrived in the Bismarck Archipelago of Papua New Guinea at least 6,000 to 8,000 years ago. [16]

Austronesian languages and cultural traits were introduced along the north and south-east coasts of New Guinea and in some of the islands north and east of New Guinea by migrating Austronesians, probably starting over 3,500 years ago. [7] This was followed by long periods of interaction that resulted in many complex changes in genetics, languages, and culture. [21]

It was once postulated that from this area a very small group of people (speaking an Austronesian language) departed to the east and became the forebears of the Polynesian people. [22] This theory was, however, contradicted by a study published by Temple University finding that Polynesians and Micronesians have little genetic relation to Melanesians; instead, they found significant distinctions between groups living within the Melanesian islands. [23] [7]

A genetic link has been identified as Polynesians are dominated by a type of macro-haplogroup C y-DNA, which is a minority lineage in Melanesia and have a very low frequency of the dominant Melanesian y-DNA which is K2b1, which complicates matters. A significant minority of them also belongs to Haplogroup O-M175. [17]

Some recent studies suggest that all humans outside of Africa have inherited some genes from Neanderthals, and that Melanesians are the only known modern humans whose prehistoric ancestors interbred with the Denisova hominin, sharing 4%–6% of their genome with this ancient cousin of the Neanderthal. [9]

Incidence of blond hair in Melanesia

Blond hair is rare in native populations outside of Europe, Central Asia and North Africa. It evolved independently in Melanesia, [24] where Melanesians of some islands (along with some indigenous Australians) are one of a few groups of non-Caucasian people who have blond hair. This has been traced to an allele of TYRP1 unique to these people, and is not the same gene that causes blond hair in Caucasians. As with blond hair that arose in Europe and parts of Asia, incidence of blondness is more common in children than in adults, with hair tending to darken as the individual matures.

The predominantly Melanesian areas of Oceania include parts of the Maluku Islands ( Moluccas) of Eastern Indonesia, New Guinea and surrounding islands, the Solomon Islands, Vanuatu and Fiji. New Caledonia and nearby Loyalty Islands for most of their history have had a majority Melanesian population, but the proportion has dropped to 43% in the face of modern immigration. [25]