From Wikipedia, the free encyclopedia
Census-designated place and unincorporated community in Virginia

McLean ( /məˈkleɪn/ mə-KLAYN) [4] is an unincorporated community and census-designated place (CDP) in Fairfax County in Northern Virginia. McLean is home to many diplomats, businesspeople, members of Congress, and high-ranking government officials partially due to its proximity to Washington, D.C. and the Central Intelligence Agency. It is the location of Hickory Hill, the former home of Ethel Kennedy, the widow of Robert F. Kennedy. It is also the location of Salona, the former home of Light-Horse Harry Lee, the Revolutionary War hero. The community had an estimated total population of 53,673 in 2015, according to estimates prepared by the United States Census Bureau. [5] It is located between the Potomac River and the town of Vienna. McLean is often distinguished by its luxury homes and its nearby high-profit shopping destinations: Tysons Corner Center and Tysons Galleria. The two McLean zip codes - 22101 and 22102 - are among the most expensive ZIP Codes in Virginia and the United States. [6] In 2018, data from the American Community Survey revealed that McLean was the 3rd wealthiest city in the United States, based on its poverty rate of 2.6% and its median household income of $190,258. [7] McLean is a home to the Mars owned brand Pedigree, a petfoods company.

The community received its name from John Roll McLean, the former publisher and owner of The Washington Post. Along with Stephen Benton Elkins and French aristocrat Jean-Pierre Guenard, in 1902 he bought the charter for the Great Falls and Old Dominion Railroad. Completed in 1906, it connected the area with Washington, D.C. McLean named a railroad station costing $1,500, of which $500 was raised locally, after himself where the rail line (traveling on the present route of Old Dominion Drive) crossed the old Chain Bridge Road. [8] The community itself was founded in 1910, when the communities of Lewinsville and Langley merged.

The community lies in the Piedmont upland on the west bank of the Potomac River. [11] [12] The river forms the community's northern and eastern borders, and a number of its smaller tributaries flow north and northeast through the CDP. From west to east, these include Bull Neck Run, Scott Run, Dead Run, Turkey Run, and Pimmit Run. [12]

McLean has a humid subtropical climate (Cfa) and is in hardiness zone 7a.

Capital One, Mars, Geebo, Booz Allen Hamilton, Freddie Mac, Hilton Worldwide, DynCorp and the Gannett Company are among the companies based in McLean, Virginia. [15] Many businesses in neighboring Tysons Corner, particularly those east of Leesburg Pike (VA Route 7) have a McLean mailing address, because the US Postal Service boundary for West McLean (ZIP Code 22102) generally follows Leesburg Pike.

As of 2012, 61.6% of the population over the age of 16 was in the labor force. 0.4% was in the armed forces, and 61.2% was in the civilian labor force with 58.4% employed and 2.9% unemployed. The occupational composition of the employed civilian labor force was: 73.2% in management, business, science, and arts; 17.9% in sales and office occupations; 5.5% in service occupations; 2.0% in natural resources, construction, and maintenance; 1.4% in production, transportation, and material moving. The three industries employing the largest percentages of the working civilian labor force were: professional, scientific, and management, and administrative and waste management services (27.8%); educational services, health care, and social assistance (17.7%); and public administration (16.6%). [1] 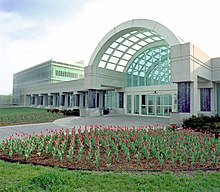 In addition, the Mount Daniel School of the Falls Church City Public Schools is physically within McLean. [17] [18]

The German School Washington, D.C. was previously in McLean. [22]

Nearby colleges and universities include the Marymount University in Arlington and DeVry University (Arlington campus). The University of Virginia's School of Continuing and Professional Studies has an academic center in Falls Church, just south of McLean. George Mason University is located 9 miles southwest of McLean in Fairfax, Virginia, while American University, Georgetown University and George Washington University are located 6, 7, and 9 miles east of McLean, respectively, in Washington, D.C.

The Polish School of Washington, D.C. holds classes on Saturdays at Longfellow Middle School, which are funded by the Polish Embassy in Washington D.C. ABRACE Inc., a Brazilian Portuguese heritage language program, holds weekly classes at McLean High School for children ages 3 to 18. [27]

WMATA (MetroBus) and Fairfax Connector each have several bus routes traveling through McLean, including routes connecting downtown McLean with the McLean Metrorail station.

Lewinsville Park, Langley Fork Park, and McLean Central Park, all operated by Fairfax County Park Authority, are located in McLean. The McLean Little League is also located in McLean. In 2005, the girls' All-Star softball team from McLean Little League won the Little League Softball World Series Championship in Portland, Oregon. [28] MLL's girls' All-Star softball team has been the Little League Softball World Series runner-up twice, in 2004 and in 2013. [29] The Mount Daniel School Park, operated by The City of Falls Church, is physically within McLean. [17] [30] Clemyjontri Park, opened in 2006, [31] with its 2-acre playground, carousel and picnic pavilion is a popular destination for families. Claude Moore Colonial Farm is also popular with history buffs and families. [32]