Maunawili is a residential census-designated place (CDP) in the City & County of Honolulu, Koʻolaupoko District, Island of Oʻahu, Hawaii, United States. As of the 2010 Census, the CDP had a population of 2,040. [1] Situated mauka (inland or mountain side) of Kalanianaʻole Highway between Castle Junction and Castle Hospital, Maunawili is nearly all private homes, schools, and a few churches; horse stables complete the rural setting. There are no commercial establishments. However, residents are only minutes (by car or bus) from Kailua. 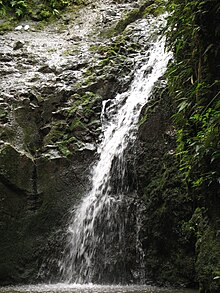 Maunawili Valley extends behind the prominent windward peak known as Olomana. The residential developments extend only part way back into the valley, which is quite large and fairly wet, supporting limited agriculture (mostly banana growing) behind the housing. Water from the numerous streams is diverted by a ditch to much drier Waimānalo to support agricultural activities there.

A golf course and agricultural research station (HSPA) are located in the valley. The agriculture research station is also home to a sugar cane, coffee and cacao breeding program. An attraction of increasing popularity is the Maunawili Demonstration Trail, a state-maintained trail that traverses the breadth of upper Maunawili Valley from the Pali Highway (access at the "Horseshoe Curve") to Waimānalo. A connecting side trail (Maunawili Falls Trail) is accessible from the neighborhood in upper Maunawili.