From Wikipedia, the free encyclopedia
(Redirected from Mata-Utu)
For various locales in Samoa, see Matautu.
Place in Wallis and Futuna, France

Mata Utu (French pronunciation: ​ [mata.yty]; ʻUvean: Matāʻutu) is the capital of Wallis and Futuna, an overseas collectivity of France. It is located on the island of Uvéa (ʻUvea), in the district of Hahake, of which it is also the capital. Its population was 1,029 in 2018. [1] It is one of two ports in Wallis and Futuna, the other being at Leava on Futuna. Hihifo Airport, the main airport accessing the island and city, is 5.6 kilometres (3.5 mi) to the northwest.

The most prominent landmarks in the town are the Matâ'Utu Cathedral, the palace next to it and backdrop of the Mt. Lulu Fakahega where there is an old chapel. [2]

In medieval times, Tuʻi Tonga invaders waged war against the islanders and took control. They installed their first chief and called him the Uveas which became ruling dynasty of the two islands; they are based at Mata-Utu even today. The fortifications which were built by the Tongans at that time have been unearthed at nearby Talierumu and Malama Tagata, during recent archaeological excavations of the area.

Catholic missionaries who came to the island in 1837 ensured that the entire population of the islands was converted to Christianity in a short period of 5 years. During this period, the missionaries not only protected the islanders from the highhandedness of the Europeans but also ensured that a number of churches were built not only at Mata-Utu but also at Mu’a and Vaitupu islands.

When the Mata-Utu was developed into a town from a small native village by the French who built most of Wallis and Futuna's major facilities here. Historically, pigs, poultry, yams, bananas, and coconut were available to arriving boats. [3] During World War II, the Free French sloop Chevreuil landed a detachment of French Marines at Mata-Utu. A small battle took place here after which they captured Vichy French dissidents and took the island's radio communication centre. [4] Francis Fox Parry of the 1st Battalion of the 11th Marines also landed here. [4] The population of the capital city was 815 in 1998. [5]

Mata-Utu is the largest urban centre on Wallis Island, which lies between Tahiti and Nouméa. [2] Uvea or Wallis island with Mata’Utu as its capital has an area of 60 km2 and is part of the larger Wallis archipelago. It is surrounded by coral reefs. Mata’Utu is the administrative headquarters and business capital of the Wallis islands. [6] It is located on the eastern coast, along the main coast road RT1. The north-south RT1 and RT3, coming from the west, intersect in the town centre. [7] Mata-Utu is one of two ports in Wallis and Futuna, the other being at Leava. [8] There are several small islets in the lagoon offshore beyond Mata-Utu Bay (Baie de Mata'utu), including Luaniva, Fugalei, Nukuhione, and Nukuhifala; the islets are a good place for ships to anchor as the shore at Mata-Utu Bay is not adequate for this purpose. [9] [10] Mata Utu Bay lies about 3 miles (5 km) to the northeast of Mua Bay. [11]

Downtown Mata-Utu is dominated by the Matâ'Utu Cathedral, a French national monument, which bears the royal insignia of Wallis, a Maltese cross between its towers. [13] The cathedral is also known as the called "Our Lady of Good Hope Cathedral", which overlooks the lagoon. Within its vicinity there are, as well as several restaurants, the Au Bon Marche and Oceania market, hotels and the post office, and the simple Palace of the King of Uvéa, which features two-storey verandas adjoining the church. [2] [6]

There is also a platform known locally as Fale Fono on the opposite side of the wharf which was used by the chief of the local tribes to address people. The hill known as the Mt. Lulu Fakahega, which rises to a height of 145 m, forms the backdrop of the village. It has an old chapel at the top. This site is accessed by a short and narrow road and the view from the top of the hill is particularly scenic. [2] 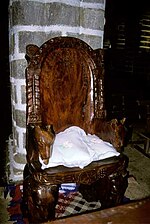 The town contains the rugby stadium Stade Laione Rugby, Stade Lomipeau, Stade de Kafika in the western suburbs and Sia Hospital. [7] [10] There are no street names in Mata-Utu. [13] Telephone facilities, banking facilities and other essential services are all available in the town.

The economy of the island is dependent on its chief produce of copra, cassava, yams, tarro roots, and bananas. Livestock consists of 25,000 pigs and 7,000 goats. The unit of currency is the CFP franc. The balance of imports is not favorable to the islands as imports exceed exports. [5]

The magistrate's court of Wallis and Futuna is located in Mata-Utu. [14] Radio Wallis et Futuna is broadcast from Mata-Utu. [15] A short distance out of town are the police station and shopping mall. There is also a branch of the Indosuez Bank in Mata-Utu, and a thermal power station. [5]Odeke, Ademuni; Ademuni-Odeke, Dr. (1998). Bareboat and Charter (Ship) Registration. Martinus Nijhoff Publishers. p. 517. ISBN  978-90-411-0513-4.</ref> The Uvéa Shop sells cassettes of the music of the Wallisian singer and composer Palisio Tuauli of the band Talamohe. [16] The town lacks a tourist information center. [13]

A cargo shipping service connects to Mata’Utu on Wallis and Leava on Futuna with Nouméa. As of 1995, there were three eight cargo vessels with a total capacity of 146128 DWT. The Hihifo Airport serves Mata’Utu and Wallis Island is 6 km (4 mi) northwest of the town. [5]

Dancers from Wallis and Futuna performing the 'Plantation'

Assumption Day is celebrated in Mata-Utu on August 15. [17] Near Mata-Utu are two important archaeological sites, Talietumu and Tonga Toto. The cultural identity of the Wallis's islanders is as Wallisian, an offshoot of Polynesian culture. The 'Uvean language, a derivative of Western Polynesian language is the language spoken in the town and on the island with close affinity to Tongan language. In Wallis island, Wallisians use 'Uvean as their everyday language whereas French is the language of the administration.