A mastodon ( Greek: μαστός "breast" and ὀδούς, "tooth") is any proboscidean belonging to the extinct genus Mammut (family Mammutidae) that inhabited North and Central America during the late Miocene or late Pliocene up to their extinction at the end of the Pleistocene 10,000 to 11,000 years ago. [1] Mastodons lived in herds and were predominantly forest-dwelling animals that lived on a mixed diet obtained by browsing and grazing, somewhat similar to their distant relatives, modern elephants, but probably with greater emphasis on browsing.

M. americanum, the American mastodon, and M. pacificus, [2] the Pacific mastodon, are the youngest and best-known species of the genus. Mastodons disappeared from North America as part of a mass extinction of most of the Pleistocene megafauna, widely believed to have been caused by overexploitation by Clovis hunters. 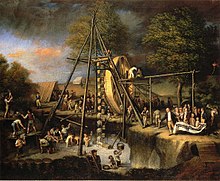 A Dutch tenant farmer found the first recorded remnant of Mammut, a tooth some 2.2 kg (5 lb) in weight, in the village of Claverack, New York, in 1705. The mystery animal became known as the "incognitum". [3] In 1739 French soldiers at present-day Big Bone Lick State Park, Kentucky, found the first bones to be collected and studied scientifically. They carried them to the Mississippi River, from where they were transported to the National Museum of Natural History in Paris. [4] Similar teeth were found in South Carolina, and some of the enslaved Africans there supposedly recognized them as being similar to the teeth of African elephants. There soon followed discoveries of complete bones and tusks in Ohio. People started referring to the "incognitum" as a "mammoth", like the ones that were being dug out in Siberia [3] – in 1796 the French anatomist Georges Cuvier proposed the radical idea that mammoths were not simply elephant bones that had been somehow transported north, but a species which no longer existed. [5] Johann Friedrich Blumenbach assigned the scientific name Mammut to the American "incognitum" remains in 1799, under the assumption that they belonged to mammoths. Other anatomists noted that the teeth of mammoths and elephants differed from those of the "incognitum", which possessed rows of large conical cusps, indicating that they were dealing with a distinct species. In 1817 Cuvier named the "incognitum" Mastodon. [3]

Cuvier assigned the name mastodon (or mastodont) - meaning "breast tooth" ( Ancient Greek: μαστός "breast" and ὀδούς, "tooth"), [6] [7] - for the nipple-like projections on the crowns of the molars.

Mastodon as a genus name is obsolete; [8] the valid name is Mammut, as that name preceded Cuvier's description, making Mastodon a junior synonym. The change was met with resistance, and authors sometimes applied "Mastodon" as an informal name; consequently it became the common term for members of the genus.

Since a tentative 1977 report of M. matthewi in China, there have been no reports of currently recognized Mammut species outside of North America according to Paleobiology database (which does not recognize M. borsoni). [21] However, the status of Mammut or Zygolophodon borsoni in the literature appears equivocal. [22] [23]

Excavation of a specimen in a golf course in Heath, Ohio, 1989

Mammut is a genus of the extinct family Mammutidae, related to the proboscidean family Elephantidae (mammoths and elephants), from which it originally diverged approximately 27 million years ago. [24] The following cladogram shows the placement of the American mastodon among other proboscideans, based on hyoid characteristics: [25]

Over the years, several fossils from localities in North America, Africa and Asia have been attributed to Mammut, but only the North American remains have been named and described, one of them being M. furlongi, named from remains found in the Juntura Formation of Oregon, dating from the late Miocene. [26] However, it is no longer considered valid, [27] leaving only five valid species.

A complete mitochondrial DNA (mtDNA) sequence has been obtained from the tooth of an M. americanum skeleton found in permafrost in northern Alaska. [28] [29] The remains are thought to be 50,000 to 130,000 years old. This sequence has been used as an outgroup to refine divergence dates in the evolution of the Elephantidae. [29] The rate of mtDNA sequence change in proboscideans was found to be significantly lower than in primates.

A 2020 analysis of mtDNA from American mastodon remains collected in eastern Beringia indicated they belonged to two genetically divergent clades. The clades were dated to different interglacials, suggesting a repeating pattern of colonization during an interglacial followed by extirpation during the subsequent glacial advance. The Beringian clades had less genetic diversity than populations present south of the ice sheets, suggesting they were founded by relatively small migrating populations. [30]

Restoration of an American mastodon 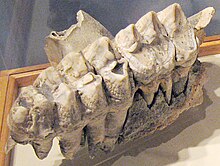 American mastodon molars at the State Museum of Pennsylvania

Like modern elephants, the females were smaller than the males. They had a low and long skull with long curved tusks, [33] with those of the males being more massive and more strongly curved. [32] Mastodons had cusp-shaped teeth, very different from mammoth and elephant teeth (which have a series of enamel plates), well-suited for chewing leaves and branches of trees and shrubs. [34]

Mastodons are typically depicted with a thick woolly mammoth-like coat of hair, but there is no preserved evidence for this. [13]

Based on the characteristics of mastodon bone sites, it can be inferred that, as in modern proboscideans, the mastodon social group consisted of adult females and young, living in bonded groups called mixed herds. The males abandoned the mixed herds once reaching sexual maturity and lived either alone or in male bond groupings. As in modern elephants, [35] there probably was no seasonal synchrony of mating activity, with both males and females seeking out each other for mating when sexually active. [36] 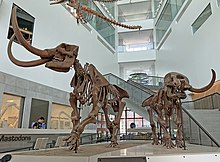 Mastodons have been characterized as predominantly browsing animals. [note 1] Of New World proboscids, they appear to have been the most consistent in browsing rather than grazing, consuming C3 as opposed to C4 plants, and in occupying closed forests versus more open habitats. [38] This dietary inflexibility may have prevented them from invading South America during the Great American Interchange, due to the need to cross areas of grassland to do so. [38] Most accounts of gut contents have identified coniferous twigs as the dominant element in their diet. Other accounts (e.g., the Burning Tree mastodon) have reported no coniferous content and suggest selective feeding on low, herbaceous vegetation, implying a mixed browsing and grazing diet, [39] with evidence provided by studies of isotopic bone chemistry indicating a seasonal preference for browsing. [40] Study of mastodon teeth microwear patterns indicates that mastodons could adjust their diet according to the ecosystem, with regionally specific feeding patterns corresponding to boreal forest versus cypress swamps, while a population at a given location was sometimes able to maintain its dietary niche through changes in climate and browse species availability. [41]

Restoration of an American mastodon herd by Charles R. Knight

The range of most species of Mammut is unknown as their occurrences are restricted to few localities, the exception being the American mastodon (M. americanum), which is one of the most widely distributed Pleistocene proboscideans in North America. M. americanum fossil sites range in time from the Blancan to Rancholabrean faunal stages and in locations from as far north as Alaska, as far east as Florida, and as far south as the state of Puebla in central Mexico, [10] with an isolated record from Honduras, probably reflecting the results of the maximum expansion achieved by the American mastodon during the Late Pleistocene. A few isolated reports tell of mastodons being found along the east coast up to the New England region, [42] [43] with high concentrations in the Mid-Atlantic region. [44] [45] There is strong evidence indicating that the members of Mammut were forest dwelling proboscideans, predominating in woodlands and forests, [36] and browsed on trees and shrubs. [33] They apparently did not disperse southward to South America, it being speculated that this was because of a dietary specialization on a particular type of vegetation. [46]

Fossil evidence indicates that mastodons probably disappeared from North America about 10,500 years ago [1] as part of a mass extinction of most of the Pleistocene megafauna that is widely believed to have been a result of human hunting pressure. [47] [48] The latest Paleo-Indians entered the Americas and expanded to relatively large numbers 13,000 years ago, [49] and their hunting may have caused a gradual attrition of the mastodon population. [50] [51] Analysis of tusks of mastodons from the American Great Lakes region over a span of several thousand years prior to their extinction in the area shows a trend of declining age at maturation; this is contrary to what one would expect if they were experiencing stresses from an unfavorable environment, but is consistent with a reduction in intraspecific competition that would result from a population being reduced by human hunting. [51]