Public transportation in the United States

From Wikipedia, the free encyclopedia
(Redirected from Mass transit in the United States) 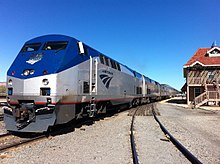 The New York City Subway is the largest heavy rail system in the world by number of stations.

Most rail service in the United States is publicly funded at all tiers of government. [1] Amtrak, the national rail system, provides service across the entire contiguous United States. The frequency of Amtrak service varies depending on the size of the city, and its location along major rail routes. For example, cities such as New York City and Washington, D.C. which are located along the busy Northeast Corridor may see up to 50 Amtrak trains per day come in an out of their stations. This same corridor is the location of the only operating high speed rail network in the Americas: the Acela Express. [8] Other smaller cities, such as Dodge City, Kansas for instance, may only have two trains daily, or in rarer cases, cities in the upper Midwestern states, where there is sparse population, might only have Amtrak service two to three times per week. Regional rail services are primarily fixed on a major city or a state. [9] For example, the Long Island Rail Road services the Long Island suburbs of New York City, while the UTA FrontRunner serves as a regional rail service for the Wasatch Front of Utah. [9] These trains normally run throughout the entire day with service ranging from every 20 minutes during peak hours to every 30-45 minutes during off-peak hours. Other rail services that are regional in nature may only operate during rush hour. For example, the Virginia Railway Express (VRE), which services the Northern Virginia suburbs of Washington, D.C., only operates during the morning hours into Washington and the evening hours out of Washington. VRE does not operate at night nor on the weekends, and only has one train during the middle of the day. Finally, several cities have light rail systems which operate generally in the core of the city and their surrounding suburbs. For instance, cities such as Kansas City, Norfolk, Boston, New Orleans, and Seattle have streetcar services that run every 10-15 minutes throughout their respective urban cores.

Presently, there is only one for-profit, private rail service in the United States, which is Virgin Trains USA (formerly known as Brightline). [10] This service provides regular rail service from Fort Lauderdale to Miami, with a long term goal to connect Miami to Orlando, and become a statewide rail service for the state of Florida.

Several coastal cities offer ferry service linking localities that are across large bodies of water where constructing road and railway bridges is not financially viable. Ferry service sometimes is pedestrian only but sometimes may offer platforms for automobiles and public transit vehicles depending on the vessel used.

Long-distance public transit which may be too far to feasible travel by rail or bus, i.e. cross country travel, or travelling to U.S. territories) is more regularly undertaken through the airplane. [1] Most airports in major regions are situated on the peripheries of major cities and publicly owned, while airline service itself is typically owned by for-profit corporations. In some cases, larger airports may operate their own rail, bus, and monorail systems that link various terminals together. Examples of this include Atlanta, Boston, Orlando, and Washington, D.C.'s airport. 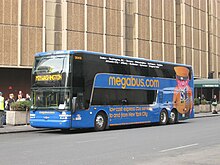 In the mid-1950s more than 2,000 buses operated by Greyhound Lines, Trailways, and other companies connected 15,000 cities and towns. Passenger volume decreased as a result of expanding road and air travel, and urban decay that caused many neighborhoods with bus depots to become more dangerous. In 1960, American intercity buses carried 140 million riders; the rate decreased to 40 million by 1990, and continued to decrease until 2006. [11]

By 1997, intercity bus transportation accounted for only 3.6% of travel in the United States. [12] In the late 1990s, however, Chinatown bus lines that connected New York with Boston and Philadelphia's Chinatowns began operating. They became popular with non-Chinese college students and others who wanted inexpensive transportation, and between 1997 and 2007 Greyhound lost 60% of its market share in the northeast United States to the Chinatown buses. During the following decade, new bus lines such as Megabus and BoltBus emulated the Chinatown buses' practices of low prices and curbside stops on a much larger scale, both in the original Northeast Corridor and elsewhere, while introducing yield management techniques to the industry. [11] [13] [14]

By 2010 curbside buses' annual passenger volume had risen by 33% and they accounted for more than 20% of all bus trips. [11] One analyst estimated that curbside buses that year carried at least 2.4 billion passenger miles in the Northeast Corridor, compared to 1.7 billion passenger miles for Amtrak trains. [13] Traditional depot-based bus lines also grew, benefiting from what the American Bus Association called "the Megabus effect", [11] and both Greyhound and its subsidiary Yo! Bus, which competed directly with the Chinatown buses, benefited after the federal government shut several Chinatown lines down in June 2012. [14]

Between 2006 and 2014, American intercity buses focused on medium-haul trips between 200 and 300 miles; airplanes performed the bulk of longer trips and automobiles shorter ones. For most medium-haul trips curbside bus fares were less than the cost of automobile gasoline, and one tenth that of Amtrak. Buses are also four times more fuel-efficient than automobiles. Their Wi-Fi service is also popular; one study estimated that 92% of Megabus and BoltBus passengers planned to use an electronic device. [11] New lower fares introduced by Greyhound on traditional medium-distance routes and rising gasoline prices have increased ridership across the network and made bus travel cheaper than all alternatives.

Effective June 25, 2014, Greyhound reintroduced many much longer bus routes, including New York- Los Angeles, Los Angeles- Vancouver, and others, while increasing frequencies on existing long-distance and ultra-long-distance buses routes. This turned back the tide of shortening bus routes and puts Greyhound back in the position of competing with long-distance road trips, airlines, and trains. Long distance buses were to have Wi-Fi, power outlets, and extra legroom, sometimes extra recline, and were to be cleaned, refueled, and driver-changed at major stations along the way, coinciding with Greyhound's eradication of overbooking. It also represented Greyhound's traditional bus expansion over the expansion of curbside bus lines. [15]

Bus rapid transit (BRT), also called a busway, is a bus-based public transport system designed to improve capacity and reliability relative to a conventional bus system. [16] Typically, a BRT system includes roadways that are dedicated to buses, and gives priority to buses at intersections where buses may interact with other traffic; alongside design features to reduce delays caused by passengers boarding or leaving buses, or purchasing fares. BRT aims to combine the capacity and speed of a metro with the flexibility, lower cost and simplicity of a bus system.

In the United States several moderately sized cities have BRT as an alternative to light rail due to perceived costs and political will. Notable examples of moderately sized cities with BRT as their fulcrum of public transportation include the Silver Line in Grand Rapids, Michigan, the GRTC Pulse in Richmond, Virginia, and the BusPlus in Albany, New York. Several satellite and suburban cities to larger cities also have bus rapid transit systems as secondary public transit services to light rail and commuter rail. For example, the Salt Lake City suburb of Murray has the planned Murray Taylorsville MAX BRT route. The Denver suburb of Fort Collins, and the Washington, D.C. suburbs of Arlington and Alexandria, Virginia contain the Metroway system.

Some major cities have their own BRT routes within city limits that function as their own rapid transit line, or as auxiliary routes to the rail lines in their respective city. In Cleveland, the HealthLine, which is considered a standard for BRT in the United States, serves most of the city. Minneapolis has the Red Line, and Los Angeles has the F Line, which does have plans to upgrade to light rail.

The vehicle can be something as simple as a merely refitted school bus (which sometimes already contains overhead storage racks) or a minibus. Often a suburban coach may be used, which is a standard transit bus modified to have some of the functionality of an interstate coach. The vehicles provide accommodation for the disabled (through a lift or ramp at the front), and thus has a few high-back seats, usually in the front, that can be folded up for wheelchairs. The rest of the seats are reclining upholstered seats and have individual lights and overhead storage bins. Because it is a commuter bus, it has some (but not much) standing room, stop-request devices, and a farebox. This model also has a bike rack at the front to accommodate two bicycles.

Suburban models in the United States are often used in Park-and-Ride services, and are very common in the New York City area, where New Jersey Transit Bus Operations is a major operator serving widespread bedroom communities.

A Metro bus in Los Angeles. 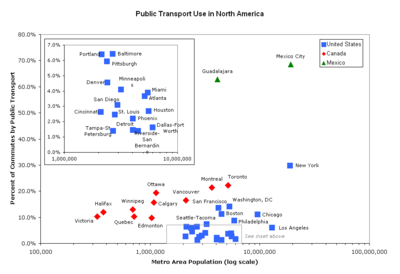 Some North American cities arranged by size along the horizontal axis and public transportation use on the vertical axis. U.S. cities have lower public transit use than similarly sized Canadian and Mexican cities.

The number of miles traveled by vehicles in the United States fell by 3.6% in 2008, while the number of trips taken on mass transit increased by 4.0%. At least part of the drop in urban driving can be explained by the 4% increase in the use of public transportation [17]

About one in every three users of mass transit in the United States and two-thirds of the nation's rail riders live in New York City and its suburbs. [18] [19]

Most medium-sized cities have some form of local public transportation, usually a network of fixed bus routes. Larger cities often have metro rail systems (also known as heavy rail in the U.S.) and/or light rail systems for high-capacity passenger service within the urban area, and commuter rail to serve the surrounding metropolitan area. These include:

American mass transit is funded by a combination of local, state, and federal agencies. At the federal level, the Federal Transit Administration (FTA) provides financial assistance and technical assistance to state governments and local transit providers. From FY 2005 to FY 2009, the funding scheme for the FTA was regulated by the SAFETEA-LU bill, which appropriated $286.4 billion in guaranteed funding. [20] The FTA awards grants through several programs, such as the New Starts program and Transit Investments for Greenhouse Gas and Energy Reduction (TIGGER) program.

On June 26, 2008, the House passed the Saving Energy Through Public Transportation Act (H.R. 6052), [21] which gives grants to mass transit authorities to lower fares for commuters pinched at the pump and expand transit services. The bill also: