From Wikipedia, the free encyclopedia
A largely submerged coral atoll in the Northwestern Hawaiian Islands 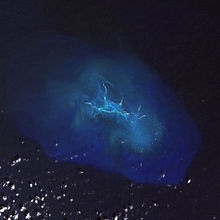 USNS Mission San Miguel (T-AO-129) ran aground on the reef, while running at full speed and in ballast, and sank on October 8, 1957.