A French Huguenot expedition, led by Jean Ribault in 1562, was the first European group to attempt to colonize Parris Island. Earlier Spanish expeditions had sighted the area, and named it "Punta de Santa Elena", which now remains one of the oldest continuously used European place names in the United States. The French expedition built an outpost named Charlesfort, and Ribault left a small garrison as he returned to France for colonists and supplies.

After a long absence because of Ribault's delay from wars in Europe, Charlesfort was abandoned after the garrison mutinied, built a ship on the island and sailed back to France in April 1563. In 1566, the Spanish, led by Pedro Menéndez de Avilés founded a settlement named Santa Elena which became the capital of La Florida for the next decade. In May 1586 an English force led by Francis Drake had raided and burned St. Augustine much further South. Fearing another raid, both Santa Elena and Parris Island were abandoned by the Spanish the following year. [2]

After coming under English control, the island was granted to Robert Daniell in 1706 and became known as Port Royal Island. It later came into the hands of Colonel Alexander Parris, some time Public Treasurer of South Carolina. After his death 1736, it gradually became known as Parris Island (and the name Port Royal Island was applied to a different one to the north). [3]

From the 1720s to the Civil War, the island was divided into a number of plantations, initially growing indigo, then later cotton. During and after the Civil War, the island became home to freed slaves, and was a site of freedmen schools taught by abolitionists such as Frances Gage and Clara Barton. Union forces captured Port Royal Sound in 1861, and Parris Island became a coaling station for the Navy. This function was taken up again after the war in large part because of the freedman-turned-Representative Robert Smalls, who fought for the creation of a new federal military installation on the island. 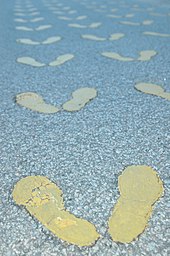 The famous yellow footprints outside of the Receiving Building, where prospective Marines receive their first taste of military life

Play media
An SDI welcoming recruits to MCRD in 2017

Marines were first assigned to Parris Island on June 26, 1891, in the form of a small security detachment headed by First Sergeant Richard Donovan, two corporals and 10 privates. [4] This unit was attached to the Naval Station, Port Royal, South Carolina, the forerunner of Parris Island. Donovan's unit was highly commended for preserving life and property during hurricanes and storm surges that swept over the island in 1891 and 1893.

Military buildings and homes constructed between 1891 and World War I form the nucleus of the Parris Island Historic District. At the district center are the commanding general's home, a 19th-century wooden dry dock, and an early 20th-century gazebo, all of which are on the National Register of Historic Places. [5]

On November 1, 1915, Parris Island was officially designated a Recruit Depot, and United States Marine Corps Recruit Training has continued since then. In the early years of the Marine Corps presence is was referred to as Paris Island. [6]

Prior to 1929, a ferry provided all transportation to and from the island from Port Royal docks to the Recruit Depot docks. That year, a causeway and a bridge over Archer's Creek were completed, thus ending the water transportation era. The causeway was dedicated as the General E. A. Pollock Memorial Causeway in April 1984. During the fateful December 1941, 5,272 recruits arrived there with 9,206 arriving the following month, making it necessary to add the 5th, 6th, 7th and 8th Recruit Training Battalions.

As the war influx continued, five battalions were sent to New River, North Carolina, to train, and the Depot expanded to 13 battalions. From 1941 to 1945, the Marines trained 204,509 recruits here and at the time of the Japanese surrender, the Depot contained more than 20,000 recruits.

The Korean War began in 1950, when 2,350 recruits were in training. From then until the 1st Marine Division withdrew from Korea, Parris Island drill instructors trained more than 138,000 recruits. In March 1952, the training load peaked at 24,424 recruits. The recruit tide again flooded during the years of the Vietnam War, reaching a peak training load of 10,979 during March 1966.

On the night of April 8, 1956, the Ribbon Creek incident resulted in the drowning of six recruits, and led to widespread changes in recruit training policies. Supervision of drill instructors was expanded, such as the introduction of the Series Commander.

On October 11, 2002, the Town of Port Royal annexed the entire island, [7] but most visitors still associate the installation with Beaufort, a larger community five miles to the north.

On June 17, 2011, Brigadier General Lori Reynolds became the first female commander of the base. [8]

At the next change of command on June 20, 2014, Brigadier General Terry Williams became the first African-American commander of the base. [9] [10] [11] 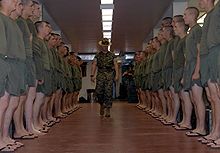 The Marines train about 17,000 recruits at Parris Island each year. Recruit training for those enlisted in the United States Marine Corps includes a thirteen-week process during which the recruit becomes cut off from the civilian world and must adapt to a Marine Corps lifestyle. During training, the drill instructors train recruits in a wide variety of subjects including weapons training, Marine Corps Martial Arts Program, personal hygiene and cleanliness, close order drill, and Marine Corps history. The training emphasizes physical fitness and combat effectiveness. Recruits must attain a minimum standard of fitness to graduate. This standard includes a Physical Fitness Test and a Combat Fitness Test. Recruits must also meet minimum combat-oriented swimming qualifications, qualify in rifle marksmanship with the M16A4 service rifle, pass minimum curriculum standards and complete a 54-hour simulated combat exercise known as " The Crucible".

This article incorporates  public domain material from websites or documents of the United States Marine Corps.