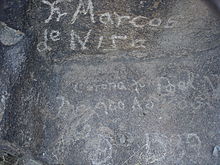 Stone Inscription, thought by some to be a forgery from a time in the 1930s, very often attributed to Fray Marcos de Niza, [1] located in Pima Canyon near Phoenix, Arizona South Mountain Park. The city of Phoenix built an iron cage around the inscription for protection. History Detectives hired a welder to remove some bars from the cage for a few minutes to allow access for Dr. Ronald Dorn, a professor at ASU, to take rock samples. Dr. Dorn’s forensic tests gave the definitive answer. The inscription was made between 1850 and 1920, not by De Niza. It's a fake and they suggest De Niza never made it that far, leading to his nickname, Father Liar.

He emigrated to America in 1531 for exploration of new land, and after serving his order zealously in Peru and Guatemala, de Niza was chosen to explore the country north of Sonora, whose wealth was depicted in the accounts of Álvar Núñez Cabeza de Vaca. [4] In 1537 he arrived in Mexico City at the request of the viceroy Antonio de Mendoza. Preceded by Estevanico, the Moroccan-Berber companion of Cabeza de Vaca in his wanderings and the Black Mexican of Zuni traditions, he left Culiacán in March 1539, crossed south-eastern Arizona near the present-day Lochiel, penetrated to the Zuni or the Seven Cities of Cibola, and in September returned to Culiacán. He saw Cibola only from a distance, and his description of it as equal in size to Mexico City was probably exact; but he embodied much mere hearsay in his report, Descubrimiento de las siete ciudades, which led Francisco Vázquez de Coronado to make his famous expedition next year to Zuni Pueblo, in present-day New Mexico, of which Fray Marcos was the guide; and the realities proved a great disappointment.

Fray Marcos was made provincial superior of his order for Mexico before the second trip to Zuni, and returned in 1541 to Mexico City in shame, where for a time was able to exercise the highest office of the Franciscans, in the province.