Manchester Square is a neighborhood in Los Angeles, California, within the South Los Angeles region.

Manchester Square is flanked by Chesterfield Square and Harvard Park on the north, Vermont Knolls on the east, Gramercy Park on the south and Inglewood and Hyde Park on the west. [1] 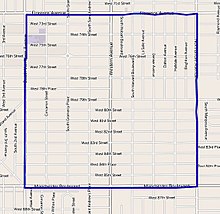 Manchester Square as outlined by the Los Angeles Times

A total of 11,594 people lived in Manchester Square's 1.01 square miles, according to the 2000 U.S. census—averaging 11,448 people per square mile, about the same as the population density in the city as a whole. The median age was 34, about the same as the rest of the city. The percentages of residents aged 11 to 18 and 65 and above were among the county's highest. [1]

Within the neighborhood, black people made up 78.6% of the population, with Latinos at 19.2%, white people 1.7%, Asian 0.3% and other 0.3%. These figures placed Manchester Square as the fourth-blackest community in Los Angeles County. Mexico and Guatemala were the most common places of birth for the 13.2% of the residents who were born abroad, considered a low percentage of foreign-born when compared with the city or county as a whole. [1]

The $46,093 median household income in 2008 dollars was considered average for the city but low for the county. The percentage of households earning $20,000 or less was high, compared to the county at large. The average household size of 2.7 people was average for both the city and the county. Renters occupied 43% of the housing units, and homeowners occupied the rest. [1]

In 2000, there were 743 families headed by single parents, or 25.6%, a rate that was high for the county and the city. There were 846 veterans, or 10.5% of the population, considered high when compared with the city overall. The percentages of veterans who served in World War II, Korea or Vietnam was among the county's highest. [1]

Manchester Square residents with a four-year degree amounted to 11.7% of the population aged 25 and older in 2000, which was a low figure when compared with the city and the county at large; nevertheless, the percentage of those residents with a high school diploma and some college was high for the county. [1]

There are two schools within the Manchester Square boundaries. They are: [2] [4]