From Wikipedia, the free encyclopedia
This article is about the plant genus. For other uses, see Magnolia (disambiguation).
Genus of angiosperms

Magnolia is a large genus of about 210 [a] flowering plant species in the subfamily Magnolioideae of the family Magnoliaceae. It is named after French botanist Pierre Magnol.

Magnolia is an ancient genus. Appearing before bees did, the flowers are theorized to have evolved to encourage pollination by beetles. [1] To avoid damage from pollinating beetles, the carpels of Magnolia flowers are extremely tough. [2] Fossilized specimens of M. acuminata have been found dating to 20 million years ago, and of plants identifiably belonging to the Magnoliaceae date to 95 million years ago. [3] Another aspect of Magnolia considered to represent an ancestral state is that the flower bud is enclosed in a bract rather than in sepals; the perianth parts are undifferentiated and called tepals rather than distinct sepals and petals. Magnolia shares the tepal characteristic with several other flowering plants near the base of the flowering plant lineage such as Amborella and Nymphaea (as well as with many more recently derived plants such as Lilium).

The natural range of Magnolia species is a disjunct distribution, with a main center in east and southeast Asia and a secondary center in eastern North America, Central America, the West Indies, and some species in South America. 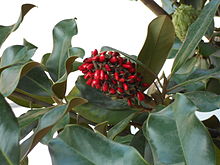 Magnolia seeds and fruit on a tree in northern Argentina

Magnolias are spreading, evergreen or deciduous trees or shrubs, characterised by large fragrant flowers which may be bowl-shaped or star-shaped, in shades of white, pink, purple, green or yellow. In deciduous species the blooms often appear before the leaves, in Spring. Cone-like fruits are often produced in Autumn. [4]

As with all Magnoliaceae, the perianth is undifferentiated, with 9–15 tepals in 3 or more whorls. The flowers are bisexual with numerous adnate carpels and stamens are arranged in a spiral fashion on the elongated receptacle. The fruit dehisces along the dorsal sutures of the carpels. The pollen is monocolpate, and the embryo development is of the Polygonum type.

Charles Plumier (1646–1704) described a flowering tree from the island of Martinique in his Genera, [5] giving it the name Magnolia, after the French botanist Pierre Magnol. 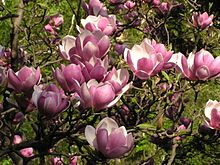 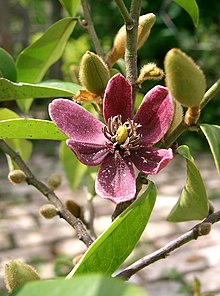 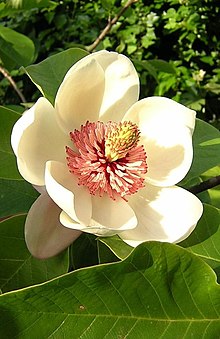 In general, the genus Magnolia has attracted horticultural interest. Some, such as the shrub M. stellata (star magnolia) and the tree M. × soulangeana (saucer magnolia) flower quite early in the spring, before the leaves open. Others flower in late spring or early summer, including M. virginiana (sweetbay magnolia) and M. grandiflora (southern magnolia).

Hybridisation has been immensely successful in combining the best aspects of different species to give plants which flower at an earlier age than the parent species, as well as having more impressive flowers. One of the most popular garden magnolias, M. × soulangeana, is a hybrid of M. liliiflora and M. denudata.

In the eastern United States, five native species are frequently in cultivation: M. acuminata (as a shade tree), M. grandiflora, M. virginiana, M. tripetala, and M. macrophylla. The last two species must be planted where high winds are not a frequent problem because of the large size of their leaves.

The flowers of many species are considered edible. In parts of England, the petals of M. grandiflora are pickled and used as a spicy condiment. In some Asian cuisines, the buds are pickled and used to flavor rice and scent tea. In Japan, the young leaves and flower buds of Magnolia hypoleuca are broiled and eaten as a vegetable. Older leaves are made into a powder and used as seasoning; dried, whole leaves are placed on a charcoal brazier and filled with miso, leeks, daikon, and shiitake, and broiled. There is a type of miso which is seasoned with magnolia, hoba miso. [6] [7]

In parts of Japan, the leaves of M. obovata are used for wrapping food and cooking dishes. 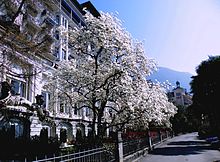 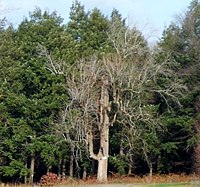 Magnolia tree in the Fall.

The bark and flower buds of M. officinalis have long been used in traditional Chinese medicine, where they are known as hou po (厚朴). In Japan, kōboku, M. obovata, has been used in a similar manner.

The cucumbertree, M. acuminata, grows to large size and is harvested as a timber tree in northeastern US forests. Its wood is sold as "yellow poplar" along with that of the tuliptree, Liriodendron tulipifera. The Fraser magnolia, M. fraseri, also attains enough size sometimes to be harvested, as well.

Magnolias are used as food plants by the larvae of some Lepidoptera species, including the giant leopard moth.

Pastoral scene of the gallant south
The bulging eyes and the twisted mouth
Scent of magnolias, sweet and fresh,
Then the sudden smell of burning flesh.

Despite Meeropol's frequent mention of the South and magnolia trees, the horrific image which inspired his poem, Lawrence Beitler's 1930 photograph capturing the lynching of Thomas Shipp and Abram Smith following the robbery and murder of Claude Deteer, actually occurred in Marion, Indiana, where magnolia trees are less common. 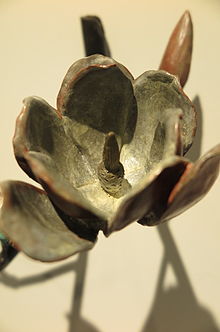 The Canadian artist, Sarah Maloney, [18] has created a series of sculptures of magnolia flowers in bronze and steel, entitled First Flowers, [19] in which she draws our attention to the dual symbols of beginnings in the flower, as both an evolutionary archetype and also one of the first trees to flower in spring (see illustration).

The name Magnolia first appeared in 1703 in the Genera [5] of Charles Plumier (1646–1704), for a flowering tree from the island of Martinique (talauma). English botanist William Sherard, who studied botany in Paris under Joseph Pitton de Tournefort, a pupil of Magnol, was most probably the first after Plumier to adopt the genus name Magnolia. He was at least responsible for the taxonomic part of Johann Jacob Dillenius's Hortus Elthamensis [20] and of Mark Catesby's Natural History of Carolina, Florida and the Bahama Islands. [21] These were the first works after Plumier's Genera that used the name Magnolia, this time for some species of flowering trees from temperate North America. The species that Plumier originally named Magnolia was later described as Annona dodecapetala by Lamarck, [22] and has since been named Magnolia plumieri and Talauma plumieri (and still a number of other names) but is now known as Magnolia dodecapetala. [b]

Carl Linnaeus, who was familiar with Plumier's Genera, adopted the genus name Magnolia in 1735 in his first edition of Systema Naturae, without a description, but with a reference to Plumier's work. In 1753, he took up Plumier's Magnolia in the first edition of Species Plantarum. There he described a monotypic genus, with the sole species being Magnolia virginiana. Since Linnaeus never saw a herbarium specimen (if there ever was one) of Plumier's Magnolia and had only his description and a rather poor picture at hand, he must have taken it for the same plant which was described by Catesby in his 1730 Natural History of Carolina. He placed it in the synonymy of Magnolia virginiana var. fœtida, the taxon now known as Magnolia grandiflora. Under Magnolia virginiana Linnaeus described five varieties (glauca, fœtida, grisea, tripetala, and acuminata). In the tenth edition of Systema Naturae (1759), he merged grisea with glauca, and raised the four remaining varieties to species status. [c]

By the end of the 18th century, botanists and plant hunters exploring Asia began to name and describe the Magnolia species from China and Japan. The first Asiatic species to be described by western botanists were Magnolia denudata, Magnolia liliiflora, [d], Magnolia coco and Magnolia figo. [e] Soon after that, in 1794, Carl Peter Thunberg collected and described Magnolia obovata from Japan and at roughly the same time Magnolia kobus was also first collected. [23]

With the number of species increasing, the genus was divided into the two subgenera Magnolia and Yulania. Magnolia contains the American evergreen species M. grandiflora, which is of horticultural importance, especially in the southeastern United States, and M. virginiana, the type species. Yulania contains several deciduous Asiatic species, such as M. denudata and M. kobus, which have become horticulturally important in their own right and as parents in hybrids. Classified in Yulania, is also the American deciduous M. acuminata (cucumber tree), which has recently attained greater status as the parent responsible for the yellow flower color in many new hybrids.

Relations in the family Magnoliaceae have been puzzling taxonomists for a long time. Because the family is quite old and has survived many geological events (such as ice ages, mountain formation, and continental drift), its distribution has become scattered. Some species or groups of species have been isolated for a long time, while others could stay in close contact. To create divisions in the family (or even within the genus Magnolia), solely based upon morphological characters, has proven to be a nearly impossible task. [f]

By the end of the 20th century, DNA sequencing had become available as a method of large-scale research on phylogenetic relationships. Several studies, including studies on many species in the family Magnoliaceae, were carried out to investigate relationships. [24] [25] [26] What these studies all revealed was that genus Michelia and Magnolia subgenus Yulania were far more closely allied to each other than either one of them was to Magnolia subgenus Magnolia. These phylogenetic studies were supported by morphological data. [27]

As nomenclature is supposed to reflect relationships, the situation with the species names in Michelia and Magnolia subgenus Yulania was undesirable. Taxonomically, three choices are available: 1 to join Michelia and Yulania species in a common genus, not being Magnolia (for which the name Michelia has priority), 2 to raise subgenus Yulania to generic rank, leaving Michelia names and subgenus Magnolia names untouched, or 3 to join Michelia with genus Magnolia into genus Magnolia s.l. (a big genus). Magnolia subgenus Magnolia cannot be renamed because it contains M. virginiana, the type species of the genus and of the family. Not many Michelia species have so far become horticulturally or economically important, apart for their wood. Both subgenus Magnolia and subgenus Yulania include species of major horticultural importance, and a change of name would be very undesirable for many people, especially in the horticultural branch. In Europe, Magnolia even is more or less a synonym for Yulania, since most of the cultivated species on this continent have Magnolia (Yulania) denudata as one of their parents. Most taxonomists who acknowledge close relations between Yulania and Michelia therefore support the third option and join Michelia with Magnolia.

The same goes, mutatis mutandis, for the (former) genera Talauma and Dugandiodendron, which are then placed in subgenus Magnolia, and genus Manglietia, which could be joined with subgenus Magnolia or may even earn the status of an extra subgenus. Elmerrillia seems to be closely related to Michelia and Yulania, in which case it will most likely be treated in the same way as Michelia is now. The precise nomenclatural status of small or monospecific genera like Kmeria, Parakmeria, Pachylarnax, Manglietiastrum, Aromadendron, Woonyoungia, Alcimandra, Paramichelia and Tsoongiodendron remains uncertain. Taxonomists who merge Michelia into Magnolia tend to merge these small genera into Magnolia s.l. as well. Botanists do not yet agree on whether to recognize a big Magnolia or the different small genera. For example, Flora of China offers two choices: a large genus Magnolia which includes about 300 species, everything in the Magnoliaceae except Liriodendron (tulip tree), or 16 different genera, some of them recently split out or re-recognized, each of which contains up to 50 species. [28] The western co-author favors the big genus Magnolia, whereas the Chinese recognize the different small genera.

Species of magnolia are most commonly listed under three subgenera, 12 sections, and 13 subsections, such as that used here, following the classification of the Magnolia Society. [29] It does not represent the last word on the subclassification of the genus Magnolia (see above), as a clear consensus has not yet been reached. Each species entry follows this pattern: Botanical name Naming auth. – (REGION FOUND)

The subdivision structure is as follows:

Anthers open by splitting at the front facing the centre of the flower, deciduous or evergreen, flowers produced after the leaves. 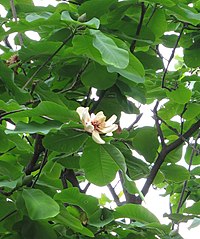 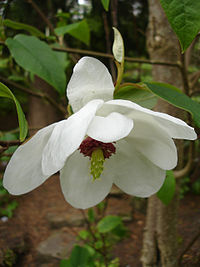 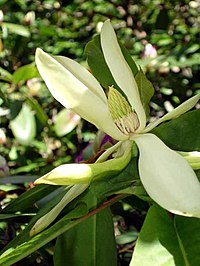 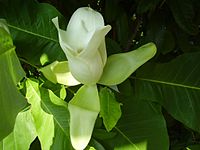 Anthers open by splitting at the sides, deciduous, flowers mostly produced before leaves (except M. acuminata) 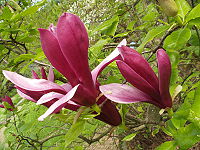 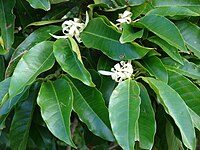