From Wikipedia, the free encyclopedia
For the casino in Las Vegas, see Park MGM.

MGM Park is a baseball park in Biloxi, Mississippi. The home of the Double-A Biloxi Shuckers of the Southern League, it opened on June 6, 2015, and can seat up to 6,067 people. The stadium was the site of the 2019 Southern League All-Star Game. Though primarily a venue for Minor League Baseball, it has been the home of the Conference USA Baseball Tournament since 2017. Concerts have also been held at the venue. 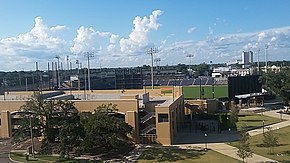 MGM Park as seen from beyond the right field parking garage

In January 2014, Ken Young purchased a majority interest in the Huntsville Stars, a Double-A Minor League Baseball team of the Southern League. He planned to relocate the franchise from Huntsville, Alabama, to Biloxi, Mississippi, for the 2015 season. [8] The team remained in Huntsville through the 2014 season while a new ballpark was built. [9] Upon arrival in Mississippi, the team would become known as the Biloxi Shuckers in reference to the city's oyster industry and seafood heritage. [10]

A groundbreaking ceremony was held on January 23, 2014, before the Biloxi City Council approved the project's construction. [1] Their final approval came on May 9, 2014, when they voted unanimously, without public discussion, to cancel its project management contract with Yates Construction. [11] Because of this, the expected completion date of the ballpark was pushed from April 2015 to May 17, 2015. [12] The city had decided to "separately bid each phase" of construction "rather than drafting specifications for the entire project", but the council instead would "bid the entire project". [11] Yates Construction was awarded the new contract via a 5–2 vote by the Biloxi City Council on July 22, 2014. [6]

MGM Resorts International purchased the naming rights to the stadium in September 2014 for a period of 20 years, naming it MGM Park. [13]

Due to construction delays, the Shuckers played the first 54 games of their inaugural 2015 season on the road. [14] The team's MGM Park home opener was played on June 6, 2015, versus the Mobile BayBears, a 4–3 victory. [15] Going into extra innings, Nick Shaw singled home Brent Suter from second base in the bottom of the fourteenth inning to secure the win. [15] The inaugural home opener was attended by 5,065 people. [7] The stadium's single-game attendance record was set later that season when 6,231 people saw Biloxi defeated by the Mississippi Braves, 4–3, on July 3. [7]

On April 2, 2016, the ballpark was the site of an exhibition game between the Shuckers and their Major League Baseball (MLB) affiliate, the Milwaukee Brewers. Players appearing for the Brewers in the game included Ryan Braun, Domingo Santana, Jonathan Villar, Martín Maldonado, and Chase Anderson. [16] The 7–4 Milwaukee win was attended by 5,152 people. [16] This was the first time a major league team played in Biloxi since the 1938 Philadelphia Phillies held spring training at Biloxi Stadium. [17] [18]

Shuckers pitchers threw the first no-hitter in franchise history on August 14, 2017, at MGM Park. [19] Hiram Burgos (2 IP), Forrest Snow (3 IP), Nick Ramirez (1 IP), and Jorge López (1 IP) combined for the effort in the second game of a seven-inning doubleheader against the Tennessee Smokies, a 1–0 win. [20]

MGM Park hosted the Southern League All-Star Game on June 18, 2019. The North Division All-Stars defeated the South Division All-Stars, 7–3, with 4,209 people on hand. [21] Luis Robert of the Birmingham Barons was selected as the game's Most Valuable Player. [22] Jeffrey Baez of the Jackson Generals won the previous day's Home Run Derby. [22]

The Conference USA Baseball Tournament has been held at MGM Park since 2017. [23]