From Wikipedia, the free encyclopedia
(Redirected from Luxembourgian American)

The first families from Luxembourg arrived in the United States, around 1842, fleeing of the overpopulation and economic change in the newly independent country. They worked in the field, as was traditional in their country. [4]

Luxembourgish Americans are overwhelmingly concentrated in the Midwest, where most originally settled in the nineteenth century. At the 2000 Census, the states with the largest self-reported Luxembourgian American populations were Illinois (6,963), Wisconsin (6,580), Minnesota (5,867), Iowa (5,624), and California (2,824). [5]

Between the mid-19th century and the early 20th century, approximately one-third of the Luxembourgish population emigrated. Luxembourg was, at the time, a poor country with an economy dominated by agriculture. [6] The United States was a popular destination for Luxembourgers, as it was for many other European emigrants of the period. The number of Luxembourgers who emigrated to the US in the 19th century is thought to be around 60,000–70,000.

Emigrants leaving for the United States in the German port of Hamburg, 1874

Substantial Luxembourgish emigration to America took off from about 1845, for several reasons. Advances in medicine caused the rate of infant mortality to decline. This resulted in overpopulation. The lack of work in industry led many to despair. The country could no longer feed its population. In the large families of the time, the dividing up of inheritances led to fragmentation of land ownership. The portion of each child was reduced to a few hectares, which was barely enough to feed a family. Selling one's portion to the elder brother, however, provided enough money for the other siblings to pay for the voyage to America and to start a new life there.

Travelling was becoming easier in this period as well. Previously, it had taken as long to go from Luxembourg to Paris as from there to America. After a while, the news came to Europe that there was much unused land available in America. The Homestead Act offered fertile land for low prices. Many therefore took the step of attempting a new start, since staying in one's home country would mean death by starvation. [7]

Luxembourgers arriving in the United States would not necessarily be registered as such by the authorities, but instead as Belgians or Germans. After arriving in New York, Luxembourgers tended to move on to Chicago, as well as Iowa, Minnesota, and Wisconsin. A small number stayed in New York. 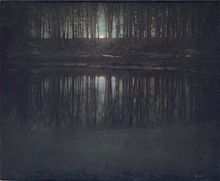 The Pond—Moonlight by Edward Steichen, one of the most expensive photographs ever sold
Further information: Category:American people of Luxembourgian descent