Lutheran Congregations in Mission for Christ

Lutheran Congregations in Mission for Christ (LCMC) is an association of Lutheran congregations in the United States. It describes itself as an affiliation of autonomous Lutheran churches and not a denomination. [4] It began in 2001 in response to some liberal views of the Evangelical Lutheran Church in America (ELCA). LCMC is characterized by the stances it takes on Lutheran polity, biblical authority, and human sexuality. The group describes itself as "centrist" or "mainstream", noting that it stands between the more liberal ELCA and the more conservative Lutheran Church–Missouri Synod (LCMS) and other Lutheran church bodies in North America. 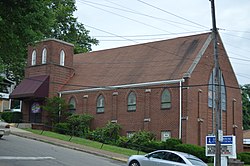 LCMC was started by the WordAlone Network as an alternative for local churches who no longer felt that they could remain in the ELCA and work to reform it. In 2001 the organization began with 31 congregations as charter members. As of July 2016 membership was reported as 934 congregations, including 734 US congregations in 41 states, the U.S. Territories of Guam and Puerto Rico, as well as over 100 congregations in 17 other countries (including Belarus, Cambodia, Canada, Mexico, Nicaragua, Russia, and Vietnam). LCMC is now the fourth largest Lutheran group in the United States, after the ELCA, LCMS, and Wisconsin Evangelical Lutheran Synod (WELS).

LCMC is congregational in structure, rejecting the historic episcopate which was adopted by the ELCA, the denomination to which many LCMC members had previously belonged, in the (CCM) Call to Common Mission.

The beliefs of the LCMC are based on the Bible and the Lutheran confessions in the Book of Concord. On one important issue, LCMC stands apart from other conservative confessional Lutheran denominations: it permits, but does not require the ordination of female clergy. Some congregations' constitutions and bylaws allow only men to be installed into the Office of Holy Ministry.

The LCMC does not bless same-sex partnerships and requires all pastors on their clergy list to subscribe to their pastoral admonition on human sexuality: "We affirm that God created us male and female, and that it is God's will and intention that human sexual expression and fulfillment take place only within the boundaries of marriage between one man and one woman (Genesis 2:24-25; Matthew 19:4-6; and Mark 10:2-9). And, we confess as individuals and as congregations that we have not fulfilled God's will in our decisions, modeling, and teaching." [5]

The LCMC has an evangelical catholic and charismatic strand. Many congregations hold to liturgical forms and vested celebrants when leading worship and administering the Sacrament of the Altar. The LCMC brings together the Sacramental, Evangelical and Charismatic nature of the church into one fold. The LCMC has ten geographic and three non-geographic districts. The non-geographic districts are theologically orientated. [6]