From Wikipedia, the free encyclopedia
Administrative district of the Viceroyalty of New Spain

De Soto claiming the Mississippi, as depicted in the United States Capitol rotunda

Spanish Louisiana (Spanish: la Luisiana [2]) was a governorate and administrative district of the Viceroyalty of New Spain from 1762 to 1801 that consisted of a vast territory in the center of North America encompassing the western basin of the Mississippi River plus New Orleans. The area had originally been claimed and controlled by France, which had named it La Louisiane in honor of King Louis XIV in 1682. Spain secretly acquired the territory from France near the end of the Seven Years' War by the terms of the Treaty of Fontainebleau (1762). The actual transfer of authority was a slow process, and after Spain finally attempted to fully replace French authorities in New Orleans in 1767, French residents staged an uprising which the new Spanish colonial governor did not suppress until 1769. Spain also took possession of the trading post of St. Louis and all of Upper Louisiana in the late 1760s, though there was little Spanish presence in the wide expanses of the " Illinois Country".

New Orleans was the main port of entry for Spanish supplies sent to American forces during the American Revolution, and Spain and the new United States disputed the borders of Louisiana and navigation rights on the Mississippi River for the duration of Spain's rule in the colony. New Orleans was devastated by large fires in 1788 and 1794 which destroyed most of the original wooden buildings in what is today the French Quarter. New construction was done in the Spanish style with stone walls and slate roofs, and new public buildings constructed during the city's Spanish period include several still standing today such as the St. Louis Cathedral, the Cabildo, and the Presbytere. [3]

Louisiana was later and briefly retroceded back to France under the terms of the Third Treaty of San Ildefonso (1800) and the Treaty of Aranjuez (1801). In 1802, King Charles IV of Spain published a royal bill on 14 October, effecting the transfer and outlining the conditions. Spain agreed to continue administering the colony until French officials arrived and formalized the transfer. After several delays, the official transfer of ownership took place at the Cabildo in New Orleans on 30 November 1803. Three weeks later on 20 December, another ceremony was held at the same location in which France transferred New Orleans and the surrounding area to the United States pursuant to the Louisiana Purchase. Upper Louisiana was officially transferred to France and then to the United States on Three Flags Day in St. Louis, which was a series of ceremonies held over two days on 9 and 10 March 1804. [4]

Spain was largely a benign absentee landlord administering the territory from Havana, Cuba, and contracting out governing to people from many nationalities as long as they swore allegiance to Spain. During the American Revolutionary War, the Spanish funneled their supplies to the American revolutionists through New Orleans and the vast Louisiana territory beyond.

In keeping with being absentee landlords, Spanish efforts to turn Louisiana into a Spanish colony were usually fruitless. For instance, while Spanish officially was the only language of government, the majority of the populace firmly continued to speak French. Even official business conducted at the Cabildo often lapsed into French, requiring an interpreter to be on hand. [5]

When Alejandro O'Reilly re-established Spanish rule in 1769, he issued a decree on 7 December of that year which banned the trade of Native American slaves. [6] Although there was no movement toward abolition of the African slave trade, Spanish rule introduced a new law called coartación, which allowed slaves to buy their freedom and that of others. [7]

A group of maroons led by Jean Saint Malo resisted re-enslavement from their base in the swamps east of New Orleans between 1780 and 1784. [8]

On 4 May 1795, 57 slaves and 3 local white men were put on trial in Point Coupee. At the end of the trial 23 slaves were hanged, 31 slaves received a sentence of flogging and hard labor, and the three white men were deported, with two being sentenced to six years forced labor in Havana. [6]

Upper and Lower, or the Louisianas

Spanish colonial officials divided Luisiana into Upper Louisiana (Alta Luisiana) and Lower Louisiana (Baja Luisiana) at 36° 35' North, about the latitude of New Madrid, Missouri. [9] This was a higher latitude than during the French administration, for whom Lower Louisiana was the area south of about 31° North (the current northern boundary of the state of Louisiana) or the area south of where the Arkansas River joined the Mississippi River at about 33° 46' North latitude.

In 1764, French fur trading interests founded St. Louis in what was then known as the Illinois Country. The Spanish referred to St. Louis as "the city of Illinois" and governed the region from St. Louis as the "District of Illinois". [10] 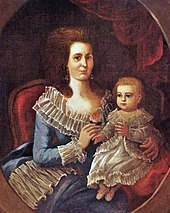 To establish Spanish colonies in Louisiana, the Spanish military leader Bernardo de Gálvez, governor of Louisiana at the time, recruited groups of Spanish-speaking Canary Islanders to emigrate to North America. [11] In 1778, several ships embarked for Louisiana with hundreds of settlers. The ships made stops in Havana and Venezuela, where half the settlers disembarked (300 Canarians remained in Venezuela). In the end, between 2,100 [12] and 2,736 [13] Canarians arrived in Louisiana and settled near New Orleans. They settled in Barataria and in what is today St. Bernard Parish. However, many settlers were relocated for various reasons. Barataria suffered hurricanes in 1779 and in 1780; it was abandoned and its population distributed in other areas of colonial Louisiana (although some of its settlers moved to West Florida). [14] In 1782, a splinter group of the Canarian settlers in Saint Bernard emigrated to Valenzuela. [13]

In 1779, another ship with 500 people from Málaga (in Andalusia, Spain), arrived in Spanish Louisiana. These colonists, led by Lt. Col. Francisco Bouligny, settled in New Iberia, where they intermarried with Cajun settlers. [15]

In 1782, during the American Revolutionary War and the Anglo-Spanish War (1779–83), Bernardo de Gálvez recruited men from the Canarian settlements of Louisiana and Galveston (in Spanish Texas, where Canarians had settled since 1779) to join his forces. They participated in three major military campaigns: the Baton Rouge, the Mobile, and the Pensacola, which expelled the British from the Gulf Coast. In 1790 settlers of mixed Canarian and Mexican origin from Galveston settled in Galveztown, Louisiana, to escape the annual flash floods and prolonged droughts of this area. [13]

Beginning in the 1790s, following the slave rebellion in Saint-Domingue (now Haiti) that began in 1791, waves of refugees came to Louisiana. Over the next decade, thousands of migrants from the island landed there, including ethnic Europeans, free people of color, and African slaves, some of the latter brought in by the white elites. They greatly increased the French-speaking population in New Orleans and Louisiana, as well as the number of Africans, and the slaves reinforced African culture in the city. [16] 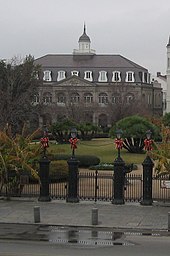 The Cabildo, next to the Saint-Louis Cathedral (See photo below.) 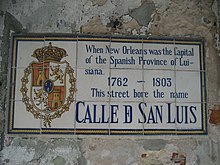 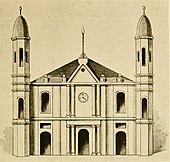 1895 recreation of the St. Louis (San Luis) Cathedral of Nueva Orleans of when it was under Spanish rule; this façade was built by the Spaniards following the Great New Orleans Fire in 1788. The cathedral was later rebuilt in the mid-19th century.

The French established settlements in French Louisiana beginning in the 17th century. The French began exploring the region from French Canada.