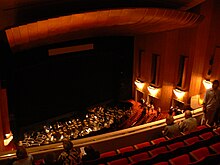 Inside the Chandler Pavilion Auditorium in 2008.

Spanish tenor and conductor Plácido Domingo has been General Director of LA Opera since 2003. To date, he has sung 27 different roles with the company including, most recently, the baritone title role of Puccini's " Gianni Schicchi" (September 2015) as well as Giorgio Germont in Verdi's " La Traviata," Athanael in Massenet's Thaïs," Francesco Foscari in Verdi's I due Foscari, Pablo Neruda in Daniel Catan's Il Postino, Siegmund in Die Walküre, Vidal Hernando in Luisa Fernanda, and the title roles in Simon Boccanegra, Tamerlano, Idomeneo and Parsifal. He has also conducted 16 different operas and numerous concerts with the company.

American conductor James Conlon has been Music Director since 2006, succeeding Kent Nagano, who held the official title of "Principal Conductor" from 2001–2003 and then became Music Director. To date, Maestro Conlon has conducted 46 different operas for LA Opera, in addition to numerous concerts.

LA Opera (also known as Los Angeles Opera), which was inaugurated in 1986 with a production of Verdi's Otello starring Plácido Domingo, traces its roots back to the Los Angeles Civic Grand Opera, which was formed in 1948. [3] It presented staged productions in a church located in Beverly Hills through the 1950s, funded by furniture maker Francesco Pace. [3] Later, Carol F. Henry, who has served as the President of the Board since 2005, became started volunteering for the Los Angeles Opera League in 1981. [3] Shortly after its third production at the Dorothy Chandler Pavilion, the company abandoned its own production projects and recreated itself as the Music Center Opera Association by bringing opera from other cities to the Music Center, notably San Francisco Opera the New York City Opera. San Francisco Opera began presenting productions in Los Angeles in 1937 and continued to do so every fall until 1969. [4] The NYCO brought productions to Los Angeles every fall from 1966 to 1982.

In 1984, the Music Center Opera Association hired Peter Hemmings and gave him the task of creating a local opera company which would once again present its own productions. This led to the forming of Los Angeles Opera. Hemmings stepped down as General Director in 2000, with Plácido Domingo assuming leadership of the company following season. (In fact, Domingo had been involved in the creation of the company, having served as its artistic consultant since 1984.) In November 2001, Edgar Baitzel was made director of artistic operations. Baitzel was appointed the company's Artistic Director in May 2003 and then its chief operating officer in February 2006. Baitzel died in March 2007. [5] In September 2012, Christopher Koelsch was appointed President and Chief Executive Officer. He previously held the position of Senior Vice President and Chief Operating Officer since 2010, after serving as Vice President for Artistic Planning. [6]

The company offers productions in the standard operatic repertory as well as new and rarely staged operas. In 2015, LA Opera presented a new production of " The Ghosts of Versailles" by John Corigliano, the first major U.S. staging of that opera in 20 years. In 2014, Renee Fleming starred in a production of Andre Previn's " A Streetcar Named Desire."

In 2003, it presented the world premiere of the opera Nicholas and Alexandra, with music composed by Deborah Drattell and text by Nicholas von Hoffman. The 2010–2011 season opened with the world première of Daniel Catán's opera Il Postino, based on the 1994 drama film Il Postino: The Postman, with Domingo as the poet Pablo Neruda, Charles Castronovo in the title role and Grant Gershon conducting. In 2002 it presented the world premiere of Eurydice, composed by Matthew Aucoin with a libretto by Sarah Ruhl. [7]

The company has also frequently turned to the cinema world for directors of its productions. During the 2001–2002 season, it mounted a production of Wagner's Lohengrin, directed by Austrian actor Maximilian Schell and a double bill of Bartók's Bluebeard's Castle and Puccini's Gianni Schicchi, directed by filmmaker William Friedkin. Garry Marshall directed his own adaptation of Jacques Offenbach's La Grande Duchesse de Gerolstein in 2005. Friedkin returned to direct Richard Strauss's Ariadne auf Naxos in 2004 and, in 2008, the first two parts of Puccini's Il Trittico, Il Tabarro and Suor Angelica, a production that also featured Woody Allen making his operatic debut staging Gianni Schicchi.

The company's multi-year project, begun during the 2006-2007 season, is dedicated to presenting little known operas by the lost generation of composers whose lives and careers were cut short by the Third Reich. To date, the company has presented Alexander von Zemlinsky's Eine florentinische Tragödie (An Italian Tragedy) and Der Zwerg (The Dwarf), the U.S. premiere of Viktor Ullmann's Der zerbrochene Krug (The Broken Jug), Walter Braunfels' Die Vögel (The Birds) and the U.S. premiere of Franz Schreker's Die Gezeichneten (The Stigmatized) as part of this mission, as well as children's performances of Hans Krasa's Brundibar.

The festival drew criticism from Los Angeles County Supervisor Michael D. Antonovich, who argued that Wagner's work was the "soundtrack to the Holocaust", a reference to Wagner's anti-Semitic views. Wagner's music was played by guards at concentration camps and through loudspeakers. [8] [9] Antonovich requested that the company broaden the scope of the festival to include other classical and operatic performers, while the company argued that proper attention was made to educate festival-goers on Wagner's racist views, and that broadening the scope would be inappropriate. On a 3–1 vote, the other supervisors rejected Antonovich's motion to have the Los Angeles County Board of Supervisors send a letter to the company to shift the focus away from Wagner. [10]

Subsequently, partly as a result of the cost of producing the Ring, the company requested an emergency $14 million loan from the Board of Supervisors due to reduced sponsorships and escalating costs. The Board approved the loan 4–1, with Antonovich dissenting. In January 2012, LA Opera repaid half of the loan, with the balance repaid in December 2012.

For over 20 years, the company has produced a wide variety of education and outreach programs designed to bring opera to people of all backgrounds, from young children experiencing opera for the first time to experienced opera lovers of all ages. These include "In-School Operas" performed for and by elementary school students; full-scale student matinées and a summer "Opera Camp" for secondary school students; accredited teacher training programs; large-scale, free community performances for families; a popular lecture series for ticket holders before every mainstage performance; and open dress rehearsals for senior centers. In 2008, these programs were enjoyed by an all-time high of more than 159,000 students, teachers and community members.