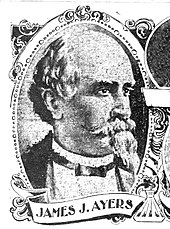 The Los Angeles Express was Los Angeles's oldest newspaper published under its original name until it combined with the Herald. It was established on March 27, 1871, [1] by five printers, Jesse Yarnell, George Yarnell, George A. Tiffany, J.W. Payton, and Miguel Veredo. [2]

A stock company was organized in March 1875, with J. J. Ayers and Joseph Lynch as directors and proprietors. [2]

In 1876 William Halley was the publisher. [3] In 1873 the editor was James J. Ayers, who resigned in October to run for Los Angeles justice of the peace, stating that it would be incompatible to do both jobs at the same time. [4] In 1879 Ayers was owner and editor. [5] In 1882, Ayers severed his connection with the newspaper and was appointed state printer. [6] [7] He was back as "proprietor" again until February 1896 or shortly before. [8]

The "name, goodwill and business" of the Los Angeles Evening Express was sold in 1884 by Ayers and Lynch to H.Z. Osborne and E.R. Cleveland, owners of the evening Republican. "The consideration is understood to be $7,500." [9] The resulting newspaper was the Evening Express and Republican, published daily except Sunday, with the subscription rate of 15 cents a week. [10] [2]

H.Z. Osborne came to Los Angeles from Bodie, Mono County, in May 1884 and bought the Republican, an evening newspaper that had been started by the Herald. In August he bought the Express and combined the two into one paper, running it along with E.R. Cleveland. [2]

In 1886 a stock company was formed, led by Osborne, as editor, Cleveland and John M. Davies. Later, C.C. Allen purchased an interest. [2]

A company headed by C.D. Willard, secretary of the Los Angeles Chamber of Commerce, took over the ownership in March 1897, and Willard became editor. [12] Fred L. Alles was named business manager. [2] 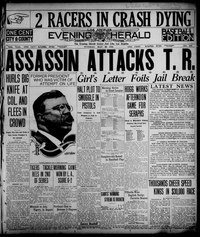 Established in 1873, the Los Angeles Herald represented the largely Democratic views of the city and focused primarily on issues local to Los Angeles and Southern California. Appealing to a mostly working-class audience during its 116 years of publication, the Herald evolved from a primary focus on agriculture to reporting extensively on Hollywood gossip and local scandal, reflecting the transformation of Los Angeles itself during the twentieth century.

The Los Angeles Daily Herald was first published on October 2, 1873, by Charles A. Storke. It was the first newspaper in Southern California to use the innovative steam press; the newspaper's offices at 125 South Broadway were popular with the public because large windows on the ground floor allowed passersby to see the presses in motion.

Storke lost the paper to creditors, who together formed the Los Angeles City and County Publishing Company in 1874. The Herald continued to focus on local news, including agriculture, business, and culture.

Under the leadership of Robert M. Widney, the paper dramatically increased its circulation. Widney interviewed local farmers and business owners for his reports. The Los Angeles Weekly Herald, making use of this material, sold more than a thousand copies a week.

Beginning in 1913 and guided by Hearst-trained editors Edwin R. Collins and John B. T. Campbell, the local coverage for which the Herald was known began to emphasize scandal, crime, and the emerging motion-picture industry. By the 1920s, editors Wes Barr and James H. Richardson were so well known for their investigative reporting that they became the prototypes for the morally ambiguous, chain-smoking reporters who figured in so many film noir movies of the 1930s.

In 1922, the Herald officially joined the Hearst News empire, although several sources suggest that Hearst had secretly purchased the paper in 1911, when Collins and Campbell took the helm.