Lone Mountain is one of California's historic hills. The hill is near to the former location of the Odd Fellows Cemetery, Masonic Cemetery, and Greek Orthodox Cemetery. The graves in these cemeteries, along with most graves in San Francisco, were moved to Colma by the 1940s. Lone Mountain is also home to the Angelo J. Rossi Playground and Rossi Pool at Arguello Boulevard and Anza Street.

Lone Mountain is also known as "University Terrace" because of the terraces that connect the two USF campuses.

In 1867, the cemetery was renamed Laurel Hill Cemetery, after the Laurel Hill garden cemetery in Philadelphia. [4] [5]

In the early 20th century, San Francisco voted most of its cemeteries out of existence, ostensibly[ clarification needed] for public health reasons; after decades of further dispute the transfer of Lone Mountain's forty-seven thousand inhabitants began, primarily to Cypress Lawn Memorial Park in the city of Colma, immediately south of San Francisco. In what writer Harold Gilliam has described as "an act of civic vandalism," thousands of crypts and mausoleums were unearthed, the granite and marble dumped along the Pacific shoreline to reinforce seawalls. [6]

The Spanish name for Lone Mountain was El Divisadero, from the Spanish divisadero, which means a point from which one can look far. [7]

Watercolor (1910) by Alice Brown Chittenden. Tents are remnants of camps set up after the 1906 earthquake. 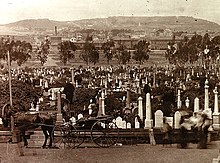