This is a list of Texas reptiles, including all snakes, lizards, crocodilians, and turtles native to the state of Texas.

The state of Texas has a large variety of habitats, from swamps, coastal marshes and pine forests in the east, rocky hills and limestone karst in the center, desert in the south and west, mountains in the far west, and grassland prairie in the north. This vast contrast in biomes makes Texas home to an extremely wide variety of herpetofauna. Its central position in the United States means that species found primarily in either the western or eastern reaches of the country often have their ranges meeting in the state. Its proximity to Mexico is such that many species found there and into Central America range as far north as Texas. The abundance of reptiles makes the state a prime area for research, and most species found in Texas have been well studied. 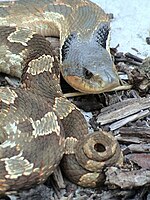