This is a list of elementary schools in the U.S. state of Hawaiʻi.

The Hawaii Federal Fire Department chose this school to launch the 2004 Fire Prevention Week on October 5, 2004. [2]

Kindergarten teacher Ruth Komatsu was named in January 1997 as one of Hawaii's Top Teachers. [3] 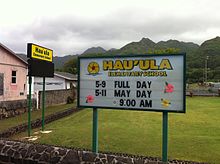 The only school in Lānaʻi is Lānaʻi High & Elementary School.