List of U.S. states and territories by historical population 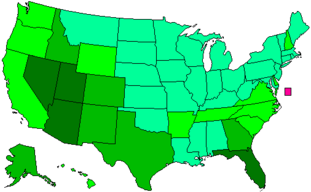 This is a list of U.S. states and territories by historical population, as enumerated every decade by the United States Census. As required by the United States Constitution, a census has been conducted every 10 years since 1790. Although the decennial census collects a variety of information that used in demographic studies, marketing, and other enterprises, the purpose of the census as stated in the Constitution is to produce an "actual enumeration" of the number of persons in the states in order to calculate their Congressional apportionment.

As the United States has grown in area and population, new states have been formed out of U.S. territories or the division of existing states. The population figures provided here reflect modern state boundaries. Shaded areas of the tables indicate census years when a territory or the part of another state had not yet been admitted as a new state. [note 1] As of 2019, 6 regions of the U.S. (the District of Columbia, American Samoa, Guam, the Northern Mariana Islands, Puerto Rico and the U.S. Virgin Islands) remain non-states. 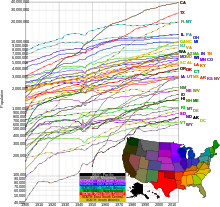 Interactive semi-log plot of historical population of the 50 states of USA and the District of Columbia from 1900 to 2015 according to Federal Reserve Economic Data categorised by US census region. In the SVG file, hover over a graph, its state abbreviation, its map or its region label to highlight it (and in SMIL-enabled browsers, click to select/deselect it).