The major professional sports leagues, or simply major leagues, in the United States and Canada are the highest professional competitions of team sports in the two countries. Although individual sports such as golf, tennis, and auto racing are also very popular, the term is usually limited to team sports.

These four leagues are also commonly referred to as the Big Four. Each of these is the richest professional club competition in its sport worldwide. The best players can become cultural icons in both countries and elsewhere in the world, because the leagues enjoy a significant place in popular culture in the U.S. and Canada. The NFL has 32 teams, the NHL has 31 and MLB and the NBA each have 30. The most recent market to receive its first "Big Four" team is Las Vegas, Nevada, which saw the NHL's Vegas Golden Knights make their debut for the 2017–18 season.

Baseball, football and hockey have had professional leagues for over 100 years; early leagues such as the National Association, Ohio League and National Hockey Association formed the basis of the modern MLB, NFL and NHL respectively. Basketball is a relatively new development; the NBA evolved from the National Basketball League and its splinter group the Basketball Association of America, taking on its current form in 1949.

Other notable leagues include Major League Soccer (MLS) and the Canadian Football League (CFL), both of which compare to the other four leagues in certain metrics but not in others. Every major league, including the CFL and MLS, draws 15,000 or more fans in attendance per game on average as of 2015. Therefore, this list includes a ranking by teams in the Big Four (B4), and a separate ranking also including teams in the CFL and MLS, called the Big Six (B6).

Though teams are listed here by metropolitan area, the distribution and support of teams within an area can reveal regional fractures below that level, whether by neighborhood, rival cities within a media market or separate markets entirely. Baseball teams provide illustrations for several of these models. In New York City, the Yankees are popularly dubbed the " Bronx Bombers" for their home borough and generally command the loyalties of fans from the Bronx, parts of Brooklyn, Staten Island, Manhattan, Long Island, parts of North Jersey and Westchester County, New York, while the Mets play in Queens and draw support from Queens, Brooklyn and parts of Long Island, revealing a split by neighborhood. The San Francisco Giants and Oakland Athletics represent rival cities within the Bay Area, a single media market. Though the Washington Nationals and Baltimore Orioles share a metro area, their cities anchor separate media markets and hold distinctly separate cultural identities. In Los Angeles, the Lakers and Clippers share an arena ( Staples Center) and media coverage is split amongst different broadcasters in the metro area.

Foxboro, Massachusetts, population 16,685 as of the 2010 Census, is a small town which hosts two major-league teams (the New England Patriots and the New England Revolution). Foxboro is considered part of the Boston metropolitan area, even though it is slightly closer to Providence, Rhode Island. In a comparable situation, the even smaller town of East Rutherford, New Jersey, population 8,913, hosts the New York Giants and New York Jets; the city of Newark, New Jersey previously hosted the now- Brooklyn Nets, New Jersey Devils and now- New York Red Bulls. Newark and East Rutherford, although both places are in New Jersey, is part of the New York City metropolitan area.

The following list contains all metropolitan areas in the United States and Canada containing at least one team in any of the six major leagues. The number of teams in the big four leagues (B4) and the big six leagues (B6), and the city's teams in the National Football League (NFL), [2] Major League Baseball (MLB), [3] the National Basketball Association (NBA), [4] the National Hockey League (NHL), [5] Major League Soccer (MLS) [6] and the Canadian Football League (CFL). [7] No metropolitan area has teams in all six leagues, as NFL teams are exclusively in the United States and CFL teams are exclusively in Canada.

The number of Big Six teams based on their home state is shown in the map below: 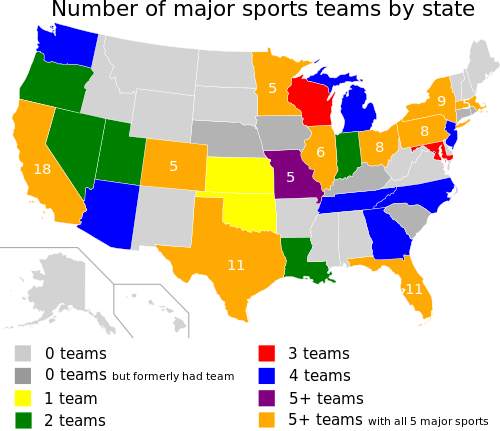 The number of Big Six teams based on their home state/province/territory is shown in the map below: 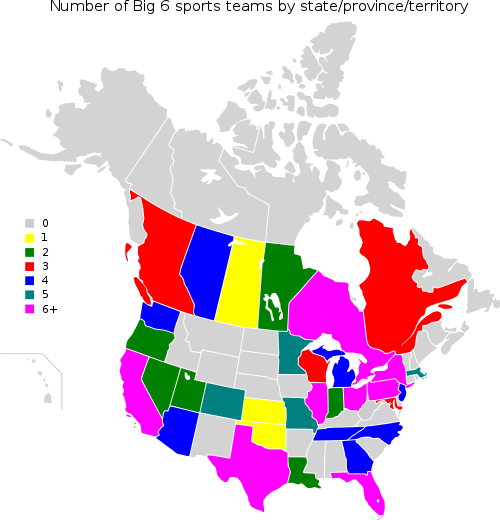