From Wikipedia, the free encyclopedia
Island in Hawaii

Lisianski Island ( Hawaiian: Papa‘āpoho) is one of the Northwestern Hawaiian Islands, with a land area of 384.425 acres (155.571 ha) and a maximum elevation of 40 feet (12 m) above sea level. It is a low, flat sand and coral island about 905 nautical miles (1,676 km) northwest of Honolulu. [1] The island is surrounded by reefs and shoals, including the extensive Neva Shoals. Access to the island is limited by helicopter or by boat to a narrow sandy inlet on the southeastern side of the island.

The island is made of limestone that caps the submerged summit of an extinct shield volcano [2] that was active about 20 million years ago. Lisianski Island is undergoing the slow process of erosion, and features a depression between two tall sand dunes, that is thought to once have been a lagoon like the one on Laysan, its nearest neighbor. For this reason, the island's selected Hawaiian name, Papa‘āpoho, means "island with a depression". Over three-quarters of the Bonin petrels that nest in Hawaii nest here. Recent discovery of subfossils on the island indicate that Laysan duck populations occurred on the island, possibly as a result of the former lagoon.

The Island is named after Yuri Lisyansky, native Ukrainian explorer and an officer in the Imperial Russian Navy. Lisianski was the commanding officer of the Russian-American Company's merchant sloop Neva, which was on an exploration mission as part of the first Russian circumnavigation of the world when she ran aground on the island in 1805. Lisianski reported the island to be of little interest, except insofar as its surrounding reefs and shoals posed a threat to passing vessels.

King Kamehameha IV claimed the island for the Hawaiian Kingdom on 10 May 1857. In 1890, the North Pacific Phosphate and Fertilizer Company acquired a twenty-year lease on the island from the Kingdom of Hawaii.

In 1909, Lisianski became part of the new Hawaiian Islands Bird Reservation established by U.S. President Theodore Roosevelt. Prior to this, there had been concern about the poaching of birds on the island. [1] [3]

The coral at Neva Shoals

Neva Shoals is a shallow reef covering 979 square kilometers (378 sq mi), [4] more than half the size of Oahu, directly southeast of the island. Neva Shoals was named by Lisiansky, after his ship, Neva. The shoal is shallow and makes access to the island difficult.The reef has been described by divers as a "coral garden"  [1] because of the great variety of coral. Twenty-four types of coral have been identified at the reefs surrounding Lisianski. Reef fish are abundant, including predators. [4]

A bathymetric chart of the Neva shoal 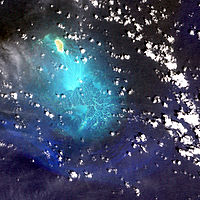 A satellite image of the Neva shoal