Present-day Lipan live mostly throughout the U.S. Southwest, in Texas, New Mexico, and the San Carlos Apache Indian Reservation in Arizona, as well as with the Mescalero tribe on the Mescalero Reservation in New Mexico; some currently live in urban and rural areas throughout North America (Mexico, United States, and Canada). On March 18, 2009, the State of Texas legislature passed resolutions HR 812 and SR 438 recognizing the Lipan Apache Tribe of Texas. [2] [3] [4] They are members of the National Congress of American Indians as a state-recognized tribe under court of claims. [5] The Lipan Apache Tribe of Texas is headquartered in McAllen, Texas.

By 1750, the Lipan Apache were driven from the Southern Great Plains by the Comanche and their allies, the so-called Norteños. The Lipan divided into the following groups or bands:

In addition the following bands were recorded:

The Spanish associated these groupings with the Lipan:

Their kin, west and southwest of them, sometimes allies and sometimes foes, the Mescalero, called them after their location and living conditions: 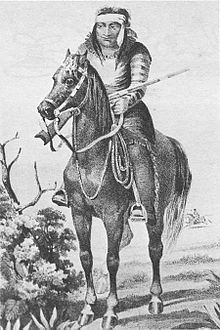 The Lipan are first mentioned in Spanish records in 1718 when they raided Spanish settlements in San Antonio. It seems likely that the Lipan had become established in Texas during the latter half of the 17th century. They moved southward during the 18th century: a Spanish mission for this people was built in Coahuila in 1754 and another on the San Sabá River in 1757. Both missions were burned and deserted; the San Saba mission was destroyed by the Comanche and their allies. During 1757 the Lipan Apache were involved in fighting with the Hasinais. [7] The Lipan participated in a Spanish Expedition against the Wichita and Comanche in 1759, but were defeated in the Battle of the Twin Villages.

Their territory ranged from the Colorado River of Texas to the Rio Grande. Two Lipan local group chiefs had a total of 700 people in 1762. Since there were at least 12 other local groups, Morris Opler estimates that the population was approximately 3,000–4,000. He estimates a total of 6,000 in 1700.

The Spanish and Lipan frequently were in conflict as Spain tried to invade and colonize the Texas territory. The Spanish tried to thwart the Lipan through alcohol, provoking conflict between the Lipan and Mescalero, making them economically dependent on Spanish trade goods, and converting them through missionaries. It is not certain if the Lipan ever lived on the Spanish missions, but by 1767 all Lipan had completely deserted them.

In the same year, Marquis of Rubí started a policy of Lipan extermination after a 1764 smallpox epidemic had decimated the tribe. Shortly after that, the Lipan entered an uneasy alliance with Spain in fight against their traditional enemy the Mescalero. The alliance fell apart before 1800. Another serious enemy of the Lipan was the Comanche, who were also opposing Spanish colonists. Many historians cite Comanche aggression as a factor leading to the Lipan's southerly migration. At the beginning of the 19th century, by contrast, the Lipan formed an alliance with the Comanche to attack the Spanish.

In 1869, Mexican troops from Monterrey were brought to Zaragosa to eliminate the Lipan Apache, who were blamed for causing trouble. Troops attacked many Lipan camps; survivors fled to the Mescaleros in New Mexico.

From 1875 to 1876, United States Army troops undertook joint military campaigns with the Mexican Army to eliminate the Lipan from the state of Coahuila in northern Mexico.

In 1881, a large campaign by Mexican Army’s Díaz division (assisted by US troops) forced all Lipan out of Coahuila and into the state of Chihuahua.

Lipan Apache is a Southern Athabaskan language. There were two people in 1981 living on the Mescalero Apache reservation known to be native speakers. [1] As of 2013, there is a concerted effort by Lipan speaking members living off reservation throughout North America who strive to keep the language and traditional culture alive.

This tribe was mentioned in a 1996 episode of Unsolved Mysteries about Devil's Backbone.[ citation needed]

Lipan Apache, Grandfather Stalking Wolf, was the boyhood mentor of Tom Brown Jr. and is featured prominently throughout Brown's books including: The Tracker, The Quest, Way of the Scout, and Grandfather.

A Lipan Apache woman is one of the characters in the 1961 short story, "Only Good Ones" by Elmore Leonard.