Levi Strauss & Co. ( /ˌliːvaɪ ˈstraʊs/) is an American clothing company known worldwide for its Levi's ( /ˈliːvaɪz/) brand of denim jeans. It was founded in May 1853 [5] when German immigrant Levi Strauss moved from Buttenheim, Bavaria, to San Francisco, California to open a west coast branch of his brothers' New York dry goods business. The company's corporate headquarters is located in Levi's Plaza in San Francisco. [6]

Levi Strauss started the business at the 90 Sacramento Street address in San Francisco and then moved the location to 62 Sacramento Street. [7] In 1858, the company was listed as Strauss, Levi (David Stern & Levis Strauss) importers clothing ,etc. 63 & 65 Sacramento St. (Today, on the current grounds of the 353 Sacramento Street Lobby [8]) in the San Francisco Directory with Strauss serving as its sales manager and his brother-in-law, David Stern, as its manager. [9] Jacob Davis, a Latvian Jewish immigrant, was a Reno, Nevada [10] tailor who frequently purchased bolts of cloth made from denim from Levi Strauss & Co.'s wholesale house. After one of Davis' customers kept purchasing cloth to reinforce torn pants, he had an idea to use copper rivets to reinforce the points of strain, such as on the pocket corners and at the base of the button fly. [11] Davis did not have the required money to purchase a patent, so he wrote to Strauss suggesting that they go into business together. After Levi accepted Jacob's offer, on May 20, 1873, the two men received U.S. Patent 139,121 from the United States Patent and Trademark Office. The patented rivet was later incorporated into the company's jean design and advertisements. Contrary to an advertising campaign suggesting that Levi Strauss sold his first jeans to gold miners during the California Gold Rush (which peaked in 1849), the manufacturing of denim overalls only began in the 1870s. The company created its first pair of Levi's 501 Jeans in the 1890s. 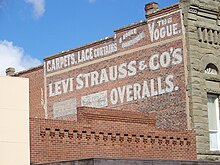 Levi Strauss advertising on a building in Woodland, California

Modern jeans began to appear in the 1920s, but sales were largely confined to the working people of the western United States, such as cowboys, lumberjacks, and railroad workers. Levi's jeans apparently were first introduced to the East during the dude ranch craze of the 1930s, when vacationing Easterners returned home with tales (and usually examples) of the hard-wearing pants with rivets. Another boost came in World War II when blue jeans were declared an essential commodity and were sold only to people engaged in defense work.

Between the 1950s and 1980s, Levi's jeans became popular among a wide range of youth subcultures, including greasers, mods, rockers, and hippies. Levi's popular shrink-to-fit 501s were sold in a unique sizing arrangement; the indicated size referred to the size of the jeans prior to shrinking, and the shrinkage was substantial. [12] The company still produces these unshrunk, uniquely sized jeans, and they are still Levi's number one selling product. Although popular lore (abetted by company marketing) holds that the original design remains unaltered, this is not the case: the crotch rivet and waist cinch were removed during World War II to conform to War Production Board requirements to conserve metal and were not replaced after the war. Additionally, the back pocket rivets, which had been covered in denim since 1937, were removed completely in the 1950s due to complaints they scratched furniture. [13] 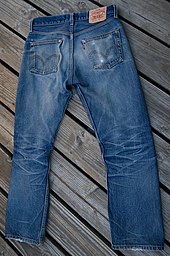 From the early 1960s through the mid-1970s, Levi Strauss experienced significant growth in its business as the more casual look of the 1960s and 1970s ushered in the "blue jeans craze" and served as a catalyst for the brand. Levi's, under the leadership of Walter Haas, Peter Haas Sr., Paul Glasco ,and George P. Simpkins Sr. expanded the firm's clothing line by adding new fashions and models, including stone-washed jeans through the acquisition of Great Western Garment Company (GWG), a Canadian clothing manufacturer. The acquisition led to the introduction of the modern " stone washing" technique, still in use by Levi Strauss. Simpkins is credited with the company's record-paced expansion of its manufacturing capacity from 16 plants to more than 63 plants in the United States from 1964 to 1974 and 23 overseas. Levi's' expansion under Simpkins was accomplished without a single unionized employee as a result of Levi's' and the Haas family's strong stance on human rights and Simpkins' use of "pay for performance" manufacturing from the sewing machine operator level up. As a result, Levi's' plants were voted the highest performing, best organized ,and cleanest textile facilities of their time. [14] From a company with fifteen salespeople, two plants, and almost no business east of the Mississippi in 1946, the organization grew in thirty years to include a sales force of more than 22,000, with 50 plants and offices in 35 countries. [15]

In the 1980s, The company closed around 60 of its manufacturing plants because of financial difficulties and strong competition from competitors. [16]

The Dockers brand, launched in 1986 and which is sold largely through department store chains, helped the company grow through the mid-1990s, as denim sales began to fade. Dockers were introduced into Europe in 1996 and led by CEO Jorge Bardina. Levi Strauss attempted to sell the Dockers division in 2004 to relieve part of the company's $2.6 billion outstanding debt. 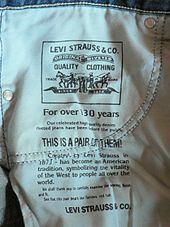 By the 1990s, Levi's faced competition from other brands and cheaper products from overseas, and began accelerating the pace of its US factory-closures and its use of offshore subcontracting agreements. In 1991, Levi Strauss became implicated in a scandal involving pants made in the Northern Mariana Islands: some 3% of Levi's jeans sold annually with the Made in the USA label were shown[ by whom?] to have been made by Chinese laborers under what the United States Department of Labor called "slavelike" conditions. As of 2016 [update], most Levi's jeans are made outside the US, though a few of the higher-end, more expensive styles are still made in the U.S.

Cited for sub-minimum wages, seven-day work weeks with 12-hour shifts, poor living conditions ,and other indignities, Tan Holdings Corporation, Levi Strauss' Marianas subcontractor, paid what were then the largest fines in U.S. labor history, distributing more than $9 million in restitution to some 1,200 employees. [17] [18] [19] Levi Strauss claimed no knowledge of the offenses, then severed ties to the Tan family and instituted labor reforms and inspection practices in its offshore facilities.

The activist group Fuerza Unida (United Force) formed following the January 1990 closure of a plant in San Antonio, Texas, in which 1,150 seamstresses, some of whom had worked for Levi Strauss for decades, saw their jobs exported to Costa Rica. [20] During the mid- and late-1990s, Fuerza Unida picketed the Levi Strauss headquarters in San Francisco and staged hunger strikes and sit-ins in protest at the company's labor policies. [21] [22] [23]

The company took on multibillion-dollar debt in February 1996 to help finance a series of leveraged stock buyouts among family members. Shares in Levi Strauss stock, at the time, were not publicly traded; the firm as of 2016 [update] was owned almost entirely by indirect descendants and collateral relatives of Levi Strauss, whose four nephews inherited the San Francisco dry-goods firm after their uncle's death in 1902. [24] The corporation's bonds are traded publicly, as are shares of the company's Japanese affiliate, Levi Strauss Japan K.K.

In June 1996, the company offered to pay its workers an unusual dividend of up to $750 million in six years' time, having halted an employee-stock plan at the time of the internal family buyout. However, the company failed to make cash-flow targets, and no worker dividends were paid. [25] 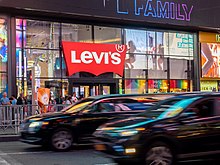 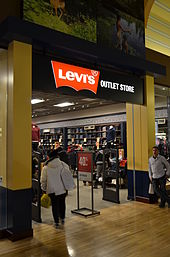 A Levi's outlet store in Vaughan Mills, a mall in Vaughan, Ontario, Canada

In 2002, Levi Strauss began a close business collaboration with Walmart, producing a special line of "Signature" jeans and other clothes for exclusive sale in Walmart stores until 2006. [27] Levi Strauss leads the apparel industry in trademark infringement cases, filing nearly 100 lawsuits against competitors since 2001. [28] Most cases center on the alleged imitation of Levi's back pocket double arc stitching pattern (U.S. trademark #1,139,254), which Levi filed for a trademark in 1978. [29] Levi's has successfully sued Guess, Polo Ralph Lauren, Esprit Holdings, Zegna, Zumiez, and Lucky Brand Jeans, among other companies. [28]

In 2002, the company closed its Valencia Street plant in San Francisco, which had opened the same year of the city's April 1906 earthquake. [30] [31] By the end of 2003, the closure of Levi's last U.S. factory in San Antonio ended 150 years of jeans made in the USA. [32] Production of a few higher-end, more expensive styles of jeans resumed in the US several years later. [31]

By 2007, Levi Strauss was again profitable after declining sales in nine of the previous ten years. [33] Its total annual sales, of just over $4 billion, were $3 billion less than during its peak performance [31] in the mid-1990s. [34] After more than two decades of family ownership, rumors of a possible public stock offering were floated[ by whom?] in the media in July 2007. [35] In 2009, it was noted[ by whom?] in the media for selling jeans on interest-free credit, due to the global recession. [36] [37] In 2010, the company partnered with Filson, an outdoor-goods manufacturer in Seattle, to produce a high-end line of jackets and workwear. [38]

On May 8, 2013, the NFL's San Francisco 49ers announced that Levi Strauss & Co. had purchased the naming rights to their new stadium in Santa Clara, California. The naming-rights deal called for Levi's to pay $220.3 million to the city of Santa Clara and to the 49ers over twenty years, with an option to extend the deal for another five years for around $75 million. [41] As of 2016 [update], Levi Strauss Signature jeans are sold in 110 countries. [40]

In 2017, Levi Strauss & Co. released a "smart jacket", an apparel they developed in partnership with Google. After two years of collaboration, the result was a denim jacket set at $350. [43]

In 2020, Levi Strauss & Co. are expected to have completely replaced chemical usage to lasers in order to cut and design ripped parts of jeans. [46] In December 2019, the Engage for Good (formerly Cause Marketing Forum) organization awarded the company the Golden Halo Award for 2020 [47] alongside Habitat for Humanity for their advancements in corporate social impact. [48]

Levi's has been worn by people from all walks of life, from miners to actors to Nobel Prize recipients, from Marlon Brando to Albert Einstein himself, whose leather jacket was made by Levi Strauss & Co in the 1930s and sold at auction house Christies in July 2016 for £110,500. [49] 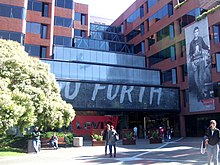 Strauss passed the company to his nephews, the sons of David Stern, upon his death in 1902. Walter A. Haas, who married the daughter of David's fourth son, Sigmund Stern, became president in 1928, and the company remained under the ownership of the Stern-Haas family until first going public in 1971. However, in 1985 the Haas family recaptured ownership of the company, taking it private once again for the next 34 years. [50] [51] In February 2019, the company filed with the U.S. Securities and Exchange Commission for an initial public offering, to be traded on the New York Stock Exchange under the ticker symbol LEVI. [52] [53] Levi Strauss went public for the second time in its history on March 21, 2019 at a price of $17 per share.

The company is also well known for promoting progressive causes. They were one of the earliest private sector institutions to support LGBTQ causes, and during the 2016 presidential campaign donated $1 million to support immigration and LGBTQ rights. In 2018, CEO Chip Bergh published an Op-ed in Fortune magazine speaking out against gun violence. [54]

As of 2019, the vast majority of Levi's are made overseas in a number of developing countries, such as India, Sri Lanka, Vietnam, and Indonesia, due to the availability of cheap labor and raw materials. Some styles in the "Levi's Premium" and "Levi's Vintage Clothing" lines are, however, made in the United States. [55] The company produces much more than just jeans, including full lines of shirts, jackets, sweaters, underwear, socks, eyeglasses, accessories, shoes, dresses, skirts, and leather products. All jeans and pants are categorized by fit—skinny, slim, straight, bootcut, taper, relaxed, flare, and "big & tall"—identified by trademarked three digit numbers. The 501, the company's original modern design, is available in styles for both men and women. The rest of the 500 series is designed for men, and the 300, 400, 700, and 800 series are designed for women. [56]