Founded in Newport, Rhode Island, on May 30, 1880, [1] as the League of American Wheelmen by Kirk Munroe and E. Charles Pratt, it soon became the leading national membership organization for cyclists in the United States. [9] The League was also the governing body for amateur bicycle racing in the U.S. during the late 19th century. The organization's first officers were Charles Pratt as president, T.K. Longstreet as vice president, O.S. Parsons as corresponding secretary, J.F. Furrell as recording secretary, and H.L. Willoughby as treasurer. [10] The board of directors consisted of two from each state having regularly organization clubs. [10] Membership peaked at 103,000 in 1898. [11] 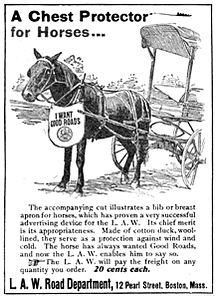 The League was a prominent advocacy group for the improvement of roads and highways in the United States [12] long before the advent of the automobile. The Good Roads Movement in the late 19th century was founded and led by the League, which began publishing Good Roads magazine in 1892.

In the mid-1890s, bicycling became accessible to the population at large with the advent of the mass-produced, chain-driven safety bicycle. A huge boom in bicycle sales occurred, then collapsed as the market became saturated. Bicycle manufacturers were no longer able to support the League financially, and the interest of its members, largely well-to-do hobbyists, turned elsewhere.

In 1894, the League voted to prohibit membership by non-white people, pushed by southern members. [13] Since the League was the governing body for bicycle racing at that time, the League's action effectively banned non-white people from most races in the United States. [14] Local clubs had some discretion, as well as a separate racing league being set up, yet racism was still prevalent. Efforts were made the following years to repeal the "white exclusive" clause, an 1895 amendment to reverse the decision was dropped, as a "continued and energetic resistance" ensued before the original League dissolved in 1902. [15] In 1999, a reformed League disavowed the 1894 action. [16]

At its height in 1898, the League had over 103,000 members. [17] Early members included three of the wealthiest men of the Gilded Age: Newport socialites John Jacob Astor, Diamond Jim Brady, and John D. Rockefeller. [17]

Amateur bicycle racing declined with the rise of professional racing. League membership declined to 76,944 in 1900 and only 8,692 in 1902. The League dissolved that year, when there were still only a very few motorized vehicles on the roads. [18] The American Automobile Association was founded the same year, 1902, and was, to an extent, a successor organization. It provided—and still provides—route information to members, as the League had provided. The League's Secretary, Abbott Bassett, produced a monthly publication under the League's name until 1924, but there was no League organization. Bassett's Scrap Book [19] covered topics such as Frank W. Weston's role in developing cycling in Boston.

Bicycle club activity revived and was particularly strong in the Chicago area during the Great Depression of the 1930s. Attempts to revive the League were initiated by representatives of the bicycle industry in 1933 and continued through the 1930s, and consisted primarily of a number of exhibitions and races under the League's name. Chicago-area bicycle clubs formed the core of a revived League governed by recreational cyclists in 1939 and which adopted a constitution in April 1942. This incarnation of the League was primarily a social organization, holding group rides and annual conventions. World War II contributed to the success of the League through rationing of motor vehicle fuel and tires. Membership was 614 in 1945, with 200 honorary members in the armed services. However, in the late 1940s, the League went into decline. Factors included the increasing availability of motor vehicles; the "baby boom", which made for difficulties in pursuing recreational cycling; narrow highways; and conformist social attitudes, with a perception of bicycling as a children's activity. Membership was only 507 in 1950 and 238 in 1953. The League dissolved again in 1955.

The League reorganized once again in 1965. By this time, highways had improved, the Eisenhower Interstate Highway System had drained traffic from many of them, and new interest in recreational cycling was spurred by the promotion of sports bicycles with derailleur gearing by the Schwinn Bicycle Company and others. Increasing awareness of the importance of physical fitness also contributed to the popularity of bicycling.

Through the end of the 20th century, the League existed as a national clearinghouse for cycling advocacy, but more so as a social organization, holding three or more regional rallies each year, usually in June, centered on public college campuses in various parts of the USA. Each of these rallies featured mapped rides of various lengths, dormitory housing and meals, a variety of cycling-related lectures, and vendors selling products. At their peak, rallies would each attract as many as 2,000 cyclists.

With increasing popularity of bicycling, however, various other organizations adopted functions which the League dropped or did not pursue—most prominently, Bikecentennial (later renamed as the Adventure Cycling Association), which maps touring routes and provides services for touring bicyclists; the Rails-to-Trails Conservancy, which promotes conversion of abandoned rail lines to trails; and the Alliance for Biking and Walking [20] (formerly Thunderhead Alliance), a loosely organized consortium of state and local advocacy organizations which maintains communication over the Internet.

The League reached a peak of 24,000 paid memberships in 1997, then declined to around 20,000, where it has remained since (as of 2009), though it is able to cite larger numbers by using a multiplier for family memberships and counting the approximately 300,000 members of affiliated bicycle clubs and advocacy organizations.

The League's rallies became less successful as bicyclists became able to find similar events closer to home. Beginning in 2003, the League would no longer organize its own rallies, but rather, would designate an existing event in one part of the country or another as its National Rally.

A major change in the direction of the League occurred in 1997 when it moved its offices from Baltimore, Maryland to Washington, D.C., and focused increasingly on advocacy at the federal level. The League has shed most of the services it once provided to individual members, other than its magazine, and now is primarily an advocacy organization. Its major annual event is now the National Bicycle Summit (which see, under Advocacy, below).

The League has continued to play a leading role in cycling issues into the 21st century. One example is the certification of cycling instructors, since the 1970s. The League's education program concentrates on practical bicycle handling and traffic skills, and has more than 1,000 active instructors as of 2009. [22] The League's Bicycle Friendly America program distributes awards to communities which have adopted measures to accommodate and encourage bicycle use. [23] The League manages liability insurance programs for its instructors and for bicycle clubs, an invaluable service to them. [24]

LAB is the voice for cyclists at the national level, and organizes an annual National Bike Summit to bring professionals and advocates in Washington, D.C., together with government representatives. A major supporter of the event is the PeopleForBikes Coalition (renamed from Bikes Belong Coalition in 2013 [25]), a § 501(c)(6) trade association for the bicycle industry which lobbies Congress for funds to build bicycle usage in the U.S. The Summit has attracted around 500 attendees in recent years (as of 2009).

In addition to PeopleForBikes, LAB works in partnership with other organizations such as America Bikes ("leveraging federal transportation dollars for bicycling", primarily with PeopleForBikes money), the Alliance for Bicycling and Walking (lobbies for government money to encourage bicycle usage while receiving substantial industry funding), Federal Highway Administration, the National Highway Traffic Safety Administration (NHTSA), NCUTCD and NCUTLO in order to "create a more bicycle-friendly America".

The League offers cycling education for adults and children in many locations across the U.S. Originally the education consisted of a single Effective Cycling (EC) course developed by John Forester and given to the League in 1976. Later, citing poor attendance and blaming the 30-hour length of the EC course, the League developed a curriculum consisting of multiple shorter courses. Forester did not agree with some of the changes to the program and withdrew permission for the League to use the EC name. [26] The name of the League's program was then changed to "Bike Ed". [27] In 2008, the program was renamed "Smart Cycling".

In addition to sponsoring the biennial "Bicycle Education Leaders Conference", the League is active in "Safe Routes to School" programs at a national level.

As of May 2018 [update], the League has formally recognized 450 communities across all 50 states as bicycle-friendly communities for "providing safe accommodation and facilities for bicyclists and encouraging residents to bike for transportation and recreation." [28] These are the communities: [29]

As of November 2018 [update], the League has formally recognized 193 universities across 46 states as bicycle-friendly institutions of higher education for "promoting and providing a more bikeable campus for students, staff and visitors." [31] These are the universities: [32]