From Wikipedia, the free encyclopedia
Culinary educational institution
This article is about the French culinary and hospitality school. For the meat dish, see Cordon bleu (dish). For other uses, see Cordon Bleu.

Le Cordon Bleu [lə kɔʁdɔ̃ blø] ( French for " The Blue Ribbon") is an international chain of hospitality and culinary schools teaching French cuisine. Its educational focuses are hospitality management, culinary arts, and gastronomy. The institution consists of 35 institutes in 20 countries and has over 20,000 students of many different nationalities. [1] 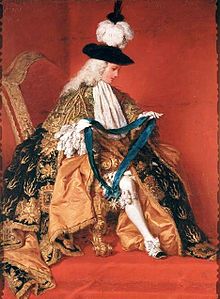 Duc de Saint-Aignan holding the Blue Ribbon with the Order of the Holy Spirit.

The origin of the school name may come from the French Royal and Catholic Ordre des Chevaliers du Saint Esprit. This was a select group of the French Nobility that had been knighted. The first creation of Royal Knights at the French Court was performed in 1576. The French Order of the Holy Spirit was for many centuries the most important highest distinction of the French Kingdom. Each member was awarded the Cross of the Holy Spirit, which hung from a blue silk ribbon. According to one story, this group became known for its extravagant and luxurious banquets, known as "cordons bleus". At the time of the French Revolution, the monarchy and the Order were abolished, but the name remained synonymous with the excellent French cooking. Another theory has it that the blue ribbon simply became synonymous with excellence, and this was later applied to other fields such as cooking. [2] The name was adopted by a French culinary magazine, La Cuisinière Cordon Bleu, founded by Marthe Distel in the late 19th century. [2] The magazine began offering lessons by some of the best chefs in France.

The magazine developed into the original Le Cordon Bleu that Distel and Henri-Paul Pellaprat established in 1895 in Paris, France. [2] In 1945, after the end of WWII, Madame Elisabeth Brassart purchased what remained of the struggling school from a Catholic orphanage which had inherited it after Distel died in the late 1930s. [3] Brassart managed the school until 1984; at the age of 87 she retired and sold the school to André J. Cointreau. [4]

In 1933, former student Dione Lucas helped to open a school under the Le Cordon Bleu name in London, England. [5] In the United States, 16 schools used to operate under the "Le Cordon Bleu North America" name through a licensing agreement with Career Education Corporation (CEC), a for-profit education company based in Chicago, Illinois. [6] In 2009, the license was estimated to be worth $135 million. [7] In 2014, Le Cordon Bleu North America generated $178.6 million in revenue and $70.6 million of operating losses. [8] However, in light of the gainful employment rules implemented by the US Department of Education in 2015, CEC, which owned and operated the US schools, made the decision to sell the 16 campuses. When they failed to find a buyer [6] [9] [10] they announced on 16 December 2015 that they will close all 16 Cordon Bleu campuses in the United States teaching out the program through September 2017. [9] [11] [6] Their last new students were accepted in January 2016. [9] [6] In June 2016, The Securities and Exchange Commission requested documents and information regarding Career Education's fourth quarter 2014 classification of its Le Cordon Bleu campuses. [12] Le Cordon Bleu has continued to maintain a presence in the United States through their New York office, Le Cordon Bleu Inc., which places U.S. students in one of the school's global locations. [13]

Campuses in the Americas [1]

Following Cointreau's purchase of the school, Le Cordon Bleu began to clamp down on unauthorized use of its name. As one example, in 2006, Cordon Bleu threatened legal action against a small family-owned restaurant in Ste. Anne, Manitoba, Canada, for trademark infringement. Although the restaurant had been operating under the name "Cordon Bleu" since 1963, and the owners asserted that no one could have mistakenly believed any connection between their "little hick restaurant" with the corporate giant, they felt that taking the issue to court would have bankrupted them. As a result, the Ste. Anne owners agreed to change their name and reached an undisclosed settlement with the larger company to pay for new signage and other costs. [14]

In 2008, a student at the London school reportedly pulled out a chef's knife and threatened to kill himself after being told that he'd failed his Basic Cuisine exam. London papers reported that the ordeal led to a four-hour standoff with police. [15]

In books and films

Le Cordon Bleu played in central role in the 2009 American film, Julie & Julia, which was partly based on Julia Child's memoir My Life in France. [16] In addition, central protagonists in other films attended or were graduates of Le Cordon Bleu such as Audrey Hepburn's character in the eponymous 1954 American film, Sabrina and Huo Ting En in the 2017 Taiwanese television series, The Perfect Match.

It also plays a central role in books by students of the school. In 2007, an American writer, Kathleen Flinn, wrote The Sharper Your Knife, the Less You Cry, the first insider's account of attending the modern Paris flagship school. [17] Flinn's best-selling memoir recounts the modern day-to-day trials of the program, and provides a further history of the school. The book was translated in several languages. [18]