From Wikipedia, the free encyclopedia
Region of France

listen); Occitan: Lengadòc-Rosselhon; Catalan: Llenguadoc-Rosselló) is a former administrative region of France. On 1 January 2016, it joined with the region of Midi-Pyrénées to become Occitanie. [2] It comprises five departments, and borders the other French regions of Provence-Alpes-Côte d'Azur, Rhône-Alpes, Auvergne, Midi-Pyrénées on the one side, and Spain, Andorra and the Mediterranean Sea on the other side. It is the southernmost region of mainland France.

The first part of the name of the province of Languedoc-Roussillon comes from the French langue d'oc ("language of oc"). In southern France, the word for yes was the Occitan language word oc. Prior to the 16th century, the central area of France was referred to as Languedoil, there the word for yes was oil in Old French, later becoming oui. These old place names referred to the areas where Occitan and Old French were spoken. [3] The Edict of Villers-Cotterets made French the official national language in 1539. Roussillon was the name of the medieval County of Roussillon.

The region is made up of the following historical provinces: 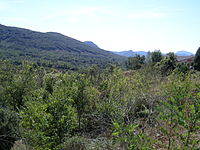 Llívia is a town of Cerdanya, province of Girona, Catalonia, Spain, that forms a Spanish exclave surrounded by French territory (department of Pyrénées-Orientales). 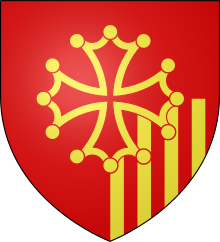 Unofficial coat of arms of Languedoc-Roussillon

At the regional elections in March 2004, the socialist mayor of Montpellier Georges Frêche, defeated its center-right president. Since then, Georges Frêche has embarked on a complete overhaul of the region and its institutions. The flag of the region, which displayed the cross of Languedoc as well as the Flag of Roussillon (the "Senyera"), was changed for a new flag with no reference to the old provinces, except in terms of the colors (red and yellow), which are the colors of both Languedoc and all the territories from the former Crown of Aragon.

Georges Frêche also wanted to change the name of the region, wishing to erase its duality (Languedoc vs. Roussillon) and strengthen its unity. Thus, he wanted to rename the region "Septimanie" ( Septimania). Septimania was the name created by the Romans at the end of the Roman Empire for the coastal area corresponding quite well to present day Languedoc-Roussillon (including Roussillon, but not including Gévaudan), and used in the early Middle Ages for the area. This name, however, has not been in use since the 9th century, and it sounded quite odd to French people. [4] Strong opposition of the population led to Georges Frêche giving up on his idea. He declared that he still believed in it but could not go ahead without a mandate.

Catalan nationalists in Roussillon would like the Pyrénées-Orientales department to secede from Languedoc-Roussillon and become a region in its own right, under the proposed name of "Catalunya Nord" ( Northern Catalonia), as part of the Països Catalans (Catalan Countries), a new country[ citation needed]. This idea has minimal popular support.[ citation needed]

On the other hand, there are some who would like to merge the Languedoc-Roussillon and Midi-Pyrénées regions, thus reunifying the old province of Languedoc, and creating a large region. It seems probable that Georges Frêche, with his idea of a "Septimanie" region, would not support such plans, although political leaders in Béziers, Narbonne, and especially Nîmes, would probably support such a merger, hostile as they are to Montpellier, which was chosen as the capital of Languedoc-Roussillon instead of their own city, and which they accuse of hegemony[ citation needed].

Prior to the 20th century, Occitan was the language spoken in Languedoc, and Catalan was the language spoken in Roussillon. Both have been under pressure from French. In 2004, research conducted by the Government of Catalonia showed that 65% of adults over the age of 15 in Roussilon could understand Catalan whereas 37% stated they were able to speak it. [5]

In recent years there have been attempts at reviving of both languages, including Catalan-medium schooling through the La Bressola schools.

Occitan literature – still sometimes called Provençal literature – is a body of texts written in Occitan in what is nowadays the South of France. It originated in the poetry of the eleventh- and twelfth- century troubadours, and inspired the rise of vernacular literature throughout medieval Europe.

Aimeric de Peguilhan, Giraut de Bornelh and Bertran de Born were major influences in troubadour composition, in the High Middle Ages. The troubadour tradition is considered to have originated in the region.

The Romantic music composer Déodat de Séverac was born in the region, and, following his schooling in Paris, returned to the region to compose. He sought to incorporate the music indigenous to the area in his compositions.

The Languedoc-Roussillon region is dominated by 740,300 acres (2,996 km2) of vineyards, three times the combined area of the vineyards in Bordeaux and the region has been an important winemaking centre for several centuries. Grapevines are said to have existed in the South of France since the Pliocene period - before the existence of Homo sapiens. The first vineyards of Gaul developed around two towns: Béziers and Narbonne. The Mediterranean climate and plentiful land with soil ranging from rocky sand to thick clay was very suitable for the production of wine, and it is estimated that one in ten bottles of the world's wine was produced in this region during the 20th century (Robinson 1999:395). Despite this enormous quantity, the area's significance was often overlooked by scholarly publications and commercial journals, largely because very little of the wine being produced was classified under an appellation contrôlée until the 1980s (Joseph 2005:190).

Several entrepreneurs such as Robert Skalli and James Herrick drastically changed the face of the region, planting more commercially viable grape varieties and pushing for new AOC classifications. While the AOC system has origins in the 15th century, the Languedoc-Roussillon has some appellations like the Cabardès which have existed by law only since 1999 (Joseph 2005:190).

The region is the largest contributor to the European Union's glut (dominance of supply over demand) of wine known as the wine lake.[ citation needed]

The Languedoc-Roussillon region has adopted a marque to help market its products, in particular, but not limited to, wine. The 'Sud de France' ( Southern France) marque was adopted in 2006 [6] to help customers abroad not familiar with the Appellation system to recognise those wines that originated in the L-R area, [7] but the marque is also used for other products, including cheeses, olive oils and pies. [8]

Languedoc-Roussillon has been a major centre of Rugby league in France since the sport was introduced to the country in the 1930s. The region is also home of the rugby union teams AS Béziers Hérault, RC Narbonne and USA Perpignan.

Montpellier is home to Montpellier HSC, which was founded in 1974 and plays in the Ligue 1, the French top division. It won the French Championship after the 2011/12 season. Home matches are played at the Stade La Mosson, named after the area where it is located, with a capacity of 31,250. It was built in 1998. 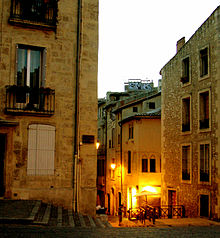