From Wikipedia, the free encyclopedia
For the architectural element, see Lanai (architecture). For the city, see Lanai City, Hawaii.
The sixth-largest of the Hawaiian Islands

Lanai ( Hawaiian: Lānaʻi, Hawaiian:  [laːˈnɐʔi, naːˈnɐʔi], /ləˈnaɪ, lɑːˈnɑːi/, [1] also US: /lɑːˈnaɪ, ləˈnɑːi/, [2] [3]) is the sixth-largest of the Hawaiian Islands and the smallest publicly accessible inhabited island in the chain. [4] It is colloquially known as the Pineapple Island because of its past as an island-wide pineapple plantation. [5] The island's only settlement of note is the small town of Lanai City. As of 2012 [update], the island was 98% owned by Larry Ellison (Founder and Chairman of Oracle), [6] with the remaining 2% owned by the state of Hawaii and privately owned homes. [7] [8]

Lanai is a roughly apostrophe-shaped island with a width of 18 miles (29 km) in the longest direction. The land area is 140.5 square miles (364 km2), making it the 42nd largest island in the United States. [9] It is separated from the island of Molokaʻi by the Kalohi Channel to the north, and from Maui by the Auʻau Channel to the east. The United States Census Bureau defines Lanai as Census Tract 316 of Maui County. Its total population shrank from 3,193 as of the 2000 census [10] to 3,131 as of 2010 [update]. [11] [12] Many of the island's landmarks are accessible only by dirt roads that require a four-wheel drive vehicle.[ citation needed]

There is one school, Lanai High and Elementary School, serving the entire island from kindergarten through 12th grade. There is also one hospital, Lanai Community Hospital, with 24 beds, and a community health center providing primary care, dental, behavioral health and selected specialty services in Lanai City. [13] [14] There are no traffic lights on the island.

Lanai was under the control of nearby Maui before recorded history. Its first inhabitants may have arrived as late as the 15th century.

The Hawaiian-language name Lānaʻi is of uncertain origin, but the island has historically been called Lānaʻi o Kauluāʻau, which can be rendered in English as "day of the conquest of Kauluāʻau." This epithet refers to the legend of a Mauian prince who was banished to Lanai for some of his wild pranks at his father's court in Lāhainā. The island was reportedly haunted by Akua-ino, ghosts and goblins. Kauluāʻau chased them away and brought peace and order to the island and regained his father's favor as a consequence.

The first people to migrate here, most likely from Maui and Molokaʻi, probably established fishing villages along the coast initially but later branched out into the interior where they raised taro in the fertile volcanic soil. During most of those times, the Mōʻī of Maui held dominion over Lanai, but generally left the people of Lanai alone. Life on Lanai remained relatively calm until King Kamehameha I or Kalaniʻōpuʻu-a-Kaiamamao took control, slaughtering people across the island. So many were killed that Captain George Vancouver ignored the island in 1792, because of its apparent lack of villages and population. It is mentioned that Lanai was Kamehameha's favorite fishing spot across Hawaii's main eight islands. [15]

Lanai was first seen by Europeans on February 25, 1779, when Captain Charles Clerke sighted the island from aboard James Cook's HMS Resolution. Clerke had taken command of the ship after Cook was killed at Kealakekua Bay on February 14 and was leaving the islands for the North Pacific.[ citation needed]

The history of sugar-growing in Hawaii goes back to 1802, when a farmer from China, Wong Tse Chun, produced a small amount on Lanai. He used a crude stone mill that he had brought with him to crush the cane.

In 1854 a group of Mormons were granted a lease in the ahupuaʻa of Pālāwai. In 1862 Walter M. Gibson arrived on Lānaʻi to reorganize the Mormon settlement. A year later he bought the ahupuaʻa of Pālāwai for $3000 with the money of the church but put the title in his own name. When the Mormons found this out they excommunicated him but he still got to retain the land. [16] By the 1870s, Walter M. Gibson, still the leader of the Mormon colony on the island, had acquired most of the land on the island for ranching. [6]

By 1890 the population of Lānaʻi was reduced to 200. In 1899, Gibson's daughter and son-in-law formed Maunalei Sugar Company, headquartered in Keomuku, on the windward (northeast) coast downstream from Maunalei Valley. The company failed in 1901. [17] Between 1899 and 1901, however, nearly 800 laborers, mostly from Japan, had been contracted for the plantations. Many Native Hawaiians continued to live along the less arid windward coast, supporting themselves by ranching and fishing. [18]

In 1921, Charles Gay planted the first pineapple on Lanai. The population had again decreased to 150, most of whom were the descendants of the traditional families of the island. [19] A year later, James Dole, the president of Hawaiian Pineapple Company (later renamed Dole Food Company), bought the island and developed a large portion of it into the world's largest pineapple plantation.

With Hawaii statehood in 1959, Lanai became part of the County of Maui.

In 1985, Lanai passed into the control of David H. Murdock, as a result of his purchase of Castle & Cooke, then owner of Dole.

In October 1992 the final harvest of pineapple took place on Lanai. [16]

In June 2012, Larry Ellison, then CEO of Oracle Corporation, purchased Castle & Cooke's 98 percent share of the island for $300 million. The state and individual homeowners own the remaining 2 percent, which includes the harbor and the private homes where the 3,000 inhabitants live. [20] Ellison, who believes renewable energy must be cost-competitive with fossil fuels in order to be viable, [21] stated intentions to invest as much as $500 million to improve the island's infrastructure and create an environmentally-friendly agricultural industry. [22] [23] As of 2016 [update], Ellison had spent an estimated $450 million to remodel his Four Seasons Resort Lanai at Manele Bay, which reopened in April 2016 after a seven-month shutdown. In Lanai City he built a new water filtration system and a resort-style Olympic-size public pool. He also refurbished the historic movie theater built in the 1920s but mostly shut since the 1970s, turning it into a state-of-the art movie house. His second Four Seasons Resort at Kōʻele in the mountains is currently being renovated. [24] Ellison has also started a solar-powered hydroponic farming venture, Sensei, which has two 20,000 square foot computer-monitored greenhouses and plans to build four more. [25] [8]

As of February 10, 2020 [update], Ellison is in negotiations to purchase the diesel-powered utility assets of the island in order to build out a sustainable ecosystem powered by solar power and batteries. [26] [8] However it was reported in May 2020 that while plans to transition from using fossil fuels to renewable resources continue the talks by Ellison's company to acquire the utility had ended. [27]

According to the Hawaiian legends, man-eating spirits occupied the island. For generations, Maui chiefs believed in these man-eating spirits. Differing legends say that either the prophet Lanikāula drove the spirits from the island or the unruly Maui prince Kauluāʻau accomplished that heroic feat. The more popular myth is that the mischievous Kauluāʻau pulled up every breadfruit tree (ʻulu) he could find on Maui. Finally his father, Kakaʻalaneo had to banish him to Lanai, expecting him not to survive in that hostile place. However, Kauluāʻau outwitted the spirits and drove them from the island. The chief looked across the channel from Maui and saw that his son's fire continued to burn nightly on the shore, and he sent a canoe to Lanai to bring the prince back, redeemed by his courage and cleverness. As a reward, Kakaʻalaneo gave Kauluāʻau control of the island and encouraged emigration from other islands. [28] Kauluāʻau had, in the meantime, pulled up all the breadfruit trees on Lanai, accounting for the historic lack of them on that island.[ citation needed]

The highest point in Lanai is Mount Lānaʻihale. It is an inactive volcano near the center of the island and to the east of Lanai City. The elevation of Mount Lānaʻihale is 3,366 ft (1,026 m). [29]

Lanai was traditionally administered in 13 political subdivisions ( Ahupuʻa), grouped into two districts (mokuoloko): kona ( Leeward) and koʻolau ( Windward). The ahupuaʻa are listed below, in clockwise sequence, and with original area figures in acres, starting in the northwest of the island. [30] 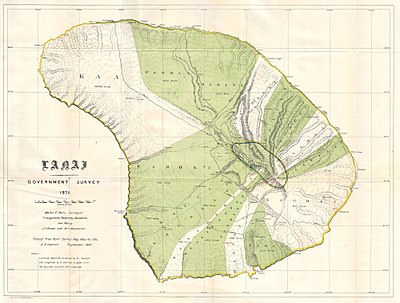 Map of 1878 with traditional subdivision into Ahupuaʻa

Kamoku hosts the largest share of population, because the bigger part of Lanai City falls into it. Parts of Lanai City stretch to Kaa and Paomai. As of 2010 [update], the remaining ahupuaʻa were virtually uninhabited. According to the census of 2000, Lanai City accounts for 99 percent of the island population (3164 of 3193). As a census-designated place, Lanai City is defined solely for statistical purposes, and not by administrative boundaries.

Tourism on Lanai began to be prominent in more recent history as the pineapple and sugarcane industries were phased out in the islands. The number of visitors coming to the island is still relatively small, however, with around 59,000 arrivals forecast for 2016—of all the publicly accessible Hawaiian islands only Molokaʻi attracts fewer visitors. [33]

As of 2016 [update], the two resort hotels on Lanai were managed by Four Seasons Hotels; the Four Seasons Resort Lanai in Manele Bay at Hulupoe Beach, just a few steps from where the ferry from Lāhainā docks, and the Lodge at Kōʻele in the mountains. The Hotel Lanai in Lanai City was built in 1923 by James Dole of the Hawaiian Pineapple Company as a lodge to house the executives overseeing the island's pineapple production. It was the island's only hotel until 1990.

Lanai is also home to three golf courses, one at each Four Seasons resort and a third, free course.

Shipwreck Beach on the north shore of the island is so named because of the remains of a wrecked vessel aground a short distance offshore. This is popularly referred to as a WW II Liberty Ship, although it is YOGN 42, one of several concrete barges built during the war. [35]

In Lanai City, there are no traffic lights, no shopping malls, and public transportation is supplied by the hotels. For a one-time fee, hotel guests enjoy unlimited rides on small and large buses that go between the hotels and the ferry landing on Manele Bay. Bicycles and off-road vehicles are for rent at the local Gas Station and Dollar Rent a Car. [36] Most attractions outside of the hotels and town can be visited only via dirt roads that require an off-road vehicle.