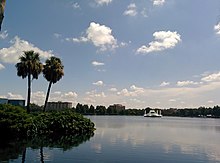 Lake Eola Park is a public park located in Downtown Orlando, Florida. Lake Eola is the main feature of the park. Also located in the park (on the west side) is the Walt Disney Amphitheater, which hosts many community events and various performances year round. On the east side of the park is a Chinese pagoda, and a playground. The park is surrounded by four streets: East Robinson Street ( State Road 526), Rosalind Avenue ( SR 527), East Central Boulevard, and North Eola Drive.

In 1883, wealthy Orlando resident Jacob Summerlin—owner of the Summerlin Hotel, the first City Council president, and financial lender for the construction of Orlando's courthouse in the 1870s—donated a large tract of land to establish a park in Orlando. In 1883, Summerlin came to a city council meeting and offered the land around the lake on the condition that it be beautified and turned into a park. He also required that the city plant trees and put a "driveway" around the lake. [3] To ensure that the city followed through with the stipulations of the donation, Summerlin put reverter clauses in the contract to allow his heirs to reclaim the property if the city failed in its obligations. [3] Several years later, his sons threatened to exercise the reverter clause if the city did not make good on its promise. Today, the park is still maintained according to his requirement that it be kept beautiful.

The park was informally established in 1888 using the first parcel of land; it was the first of many that were donated to the City of Orlando by several families. His sons named it Lake Eola, after a lady they both knew. {Of note, the daughter of Maj. Robert Dickinson Allen, 1836 - 1909, and Laura Adelaide Sims, 1842 - 1885, was named Eola J Allen. She was born about 1860. (1860 United States Federal Census Texas Bastrop, Bastrop) She was the niece of John Howard Allen, second mayor of Orlando.} The area was officially declared as a park in 1892. The park area has been home to a zoo; a horse race track; tennis courts; a pier with a dance area; and the broadcast site of a local radio station. The fountain was installed in 1912 at a cost of $10,000. A replacement, originally dubbed the "Centennial Fountain," was installed in 1957 at a cost of $350,000. The actual name of the fountain is the "Linton E. Allen Memorial Fountain". The iconic water feature is an official symbol of Orlando.

Lake Eola Park was expanded in 1993 with the closure of Washington Street, which ran between Lee's Lakeside restaurant and the park. With the expansion, the restaurant and Post Parkside Apartments were now located in the park. The International Food Court was also created at this time.

In late August 2009, lightning struck the fountain, rendering it inoperable. The city has a $1 million insurance policy on the fountain, with a $500,000 deductible. Because of the city's then-current budget crisis, the fate of the fountain was unknown. [4] On October 15, 2009, Mayor Buddy Dyer announced that the city would not only repair the fountain, but "also replace its cracked plastic skin and install a state-of-the-art system of lights and water jets" at a cost of $2.3 million. The fountain was rededicated and resumed operation on July 4, 2011. [5]