From Wikipedia, the free encyclopedia
Rights of LGBT people in New York state

The U.S. state of New York has generally been seen as socially liberal in regard to lesbian, gay, bisexual, transgender (LGBT) rights. The advocacy movement for LGBT rights in the state has been dated as far back as 1969 during the Stonewall riots in New York City. Same-sex sexual activity between consenting adults has been legal since the New York v. Onofre case in 1980. Same-sex marriage has been legal statewide since 2011, with some cities recognizing domestic partnerships between same-sex couples since 1998. Discrimination protections in credit, housing, employment, education, and public accommodation have explicitly included sexual orientation since 2003 and gender identity or expression since 2019. Transgender people in the state legally do not have to undergo sexual reassignment surgery to change their sex or gender on official documents since 2014. [1] In addition, both conversion therapy on minors and the gay and trans panic defense have been banned since 2019. From February 15, 2021 commercial surrogacy will be legally available within New York State. [2] [3] [4]

On June 28, 1969, LGBT people rioted following a police raid on the Stonewall Inn. This riot and further protests and rioting over the following nights were a watershed moment in the history of LGBT rights, and the beginning of the modern LGBT rights movement. New York City is now regarded as one of the most LGBT-friendly cities in the United States. In 2016, 30,000 people marched in the New York City LGBT Pride March, with about 2 million people in attendance. [5]

All existing laws against private consenting homosexual sexual conduct between adults were abolished by the New York Court of Appeals in the 1980 case New York v. Onofre, with the exception of laws affecting employees of the New York National Guard. A law repealing the sodomy provisions took effect in 2000. [6]

Adultery is a criminal offense in New York, and applies equally to all married couples (including within a same-sex marriage). [7] [8]

The 2011 edition of the New York City LGBT Pride March

On June 24, 2011, the New York State Legislature passed and the Governor signed the Marriage Equality Act allowing same-sex marriages to be performed in New York State. [11] The law took effect on July 24, 2011.

Previously, New York had recognized same-sex marriages performed in other jurisdictions since May 14, 2008, when Governor David Paterson issued an executive directive for all state agencies to recognize such marriages. [12] [13] [14] [15] New York City has recognized domestic partnerships since 1998, when Mayor Rudy Giuliani signed a law establishing them. [16] [17]

Before the passage of the Marriage Equality Act, the New York Court of Appeals held that New York law did not permit same-sex marriage and that there was no state constitutional right to same-sex marriage. [18]

New York has provided benefits to same-sex partners of state employees since 1995. [19]

In vitro fertilization (IVF) is available to lesbian couples in the state, however, surrogacy of any kind has been explicitly a criminal offence by fines and jail time between 1992 to 2020. Since April 2020, passed and signed (within the New York State Government Budget bill), surrogacy was legalized by the New York State Legislature and the Governor of New York State. The law goes into effect from February 15, 2021. [24] [25] [26]

Originally, the law did not include gender identity. On December 16, 2009, Governor David Paterson issued an executive order banning discrimination based on gender identity in state employment. [28] [29] Courts have also ruled that transgender individuals can pursue anti-discrimination claims under the category of "sex". [30] Beginning in 2007, the New York State Assembly passed the Gender Expression Non-Discrimination Act (GENDA) ten times. The bill would add gender identity to the state's anti-discrimination laws. [31] [32] [33] Each time it reached the State Senate, however, the bill died in that body's Judiciary Committee. A recent instance of such a defeat was April 25, 2017, when five Republicans and one Democrat on the N.Y. Senate Investigations and Government Operations Committee voted against it. [34] On May 5, 2018, it was voted down by the same committee (5 Republicans against, 4 Democrats in favor). [35] In January 2019, however, the Committee on Investigations and Government Operations voted in favor of the gender identity discrimination bill by a 6-0 vote, and both the State Assembly and the State Senate passed it by votes of 100-40 and 42-19, respectively. The same month, Governor Andrew Cuomo signed the bill into law. [36] [37] The law went into effect on 24 February 2019, as per the New York Constitution. [38] [39]

Previously, in the absence of a statewide law, the counties of Suffolk, Tompkins, and Westchester, along with the cities of New York, Albany, Binghamton, Buffalo, Ithaca, Syracuse and Rochester passed non-discrimination ordinances protecting gender identity. In addition, on October 22, 2015, Governor Andrew Cuomo announced that he would direct the New York State Division of Human Rights (DHR) to promulgate regulations banning harassment and discrimination against transgender individuals in employment, housing, education, access to credit, and public accommodations. [38] The DHR issued the regulations on November 4, 2015, [38] and they went into effect on January 20, 2016. [40] [41] [42]

It June 2019, the New York State Legislature passed a bill to repeal the common law gay and transgender panic defense. [49] The bill was signed into law by Governor Andrew Cuomo, effective immediately. New York State became the 6th US state to abolish it. [50]

In March 2020, the Attorney General of New York Letitia James changed the birth certificate policy to include individuals born within New York State to change sex or gender by just "self affirmation" - effective immediately. [51] The prior policy required natural-born New Yorkers to be 18 or older to apply to change the gender designation on their birth certificates. They also had to submit a notarized affidavit from a medical expert verifying gender confirmation surgery or a diagnosis of gender dysphoria. This policy was announced partly because a child sued New York State, over an incorrect birth certificate issued back in January 2020. [52] [53] [54]

In November 2019, it was reported that court and jury documents will contain a "gender X" option, alongside male and female. [64]

As of December 2019, a New York government agency, the Office of Temporary and Disability Assistance, is being sued because it does not allow a "gender X" option alongside male and female. As of March 2020, there has been no update on this matter. [65]

As of April 2020, New York State does not issue optional gender X driver's license yet - despite being surrounded by US states, that already have a gender X option available on drivers licenses. [66]

On May 30, 2012, in the case of Yonaty v. Mincolla, a unanimous four-judge panel of the New York Appellate Division held that labeling someone "gay" or a "homosexual" can no longer be grounds for defamation. Justice Thomas Mercure wrote: "In light of the tremendous evolution in social attitudes regarding homosexuality...it cannot be said that current public opinion supports a rule that would equate statements imputing homosexuality with accusations of serious criminal conduct or insinuations that an individual has a loathsome disease." [67] [68]

On February 6, 2016, New York Governor Andrew Cuomo announced a series of regulations to prevent the use of conversion therapy on LGBT minors. The regulations ban public and private health care insurers from covering the practice in the state, and also prohibit various mental health facilities across the state from conducting the practice on minors. [69] [70] The regulations went into effect on April 27. [71] Governor Cuomo said the following in a statement:

Conversion therapy is a hateful and fundamentally flawed practice that is counter to everything this state stands for. New York has been at the forefront of acceptance and equality for the LGBT community for decades -- and today we are continuing that legacy and leading by example.

Beginning in 2003, bills pertaining to conversion therapy had passed the state Assembly 11 times.

Prior to statewide prohibition, the following jurisdictions had enacted conversion therapy bans: 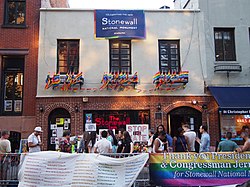 The Stonewall Inn in Greenwich Village, Manhattan, site of the June 1969 Stonewall riots, is adorned with flags depicting the colors of the rainbow. [85] [86] [87]
See also: LGBT culture in New York City

New York has one of the largest LGBT populations in the United States, and the world. Brian Silverman, the author of Frommer's New York City from $90 a Day, wrote that New York City has "one of the world's largest, loudest, and most powerful LGBT communities", and "gay and lesbian culture is as much a part of New York's basic identity as yellow cabs, high-rises, and Broadway theater". [88] As of 2005, New York City was home to an estimated 272,493 self-identifying gay and bisexual individuals. [89] The New York City metropolitan area had an estimated 568,903 self-identifying LGB residents. [89] Meanwhile, New York City is also home to the largest transgender population in the United States, estimated at 50,000 in 2018, concentrated in Manhattan and Queens. [90] Albany, the state capital, is also home to a large LGBT population, as are the cities of Buffalo, Rochester, Yonkers and Syracuse. Each host a variety of LGBT events, bars, cafés, organizations and centers. Fire Island Pines and Cherry Grove are famous internationally as gay holiday resorts with a thriving LGBT scene.

New York State possesses a long history of presence of LGBT people, and has generally been seen as socially liberal in regard to LGBT rights. However, New York also has an older history of LGBT individuals often being convicted in the state. Sexual relations between persons of the same gender (variously described as "sodomy", "buggery" or "sins of carnal nature") were illegal for most of the history of New York from its days as a Dutch colony through its colonization and independence from British rule, until such relations were legalized by judicial action in 1980. Activism for the rights of LGBT people in the state began with the rise of protest actions by the first " homophile" organizations in the 1950s and 1960s, although LGBT activism was propelled into a watershed moment in the 1969 Stonewall riots in Lower Manhattan and the later protests against the apathy of civil and political institutions to the HIV/AIDS crisis. Various organizations were established for LGBT people to advocate for rights and provide human services, the impact of which was increasingly felt at the state level. Over the following years, LGBT people gained more and more visibility, and discussions surrounding LGBT rights became increasingly more prominent and mainstream. In 1980, the New York Supreme Court legalized private consensual same-sex sexual activity, a historic and landmark decision. Simultaneously with legal reforms ongoing in the state, societal and public attitudes toward the LGBT community also evolved, going from general antipathy and hostility to tolerance and acceptance. In the early 21st century, anti-discrimination laws were modified to cover sexual orientation (in 2003) and gender identity (in 2019), a conversion therapy ban was enacted, gender transition laws were relaxed (removing the requirement for surgery amongst others), and hate crime legislation was passed. In 2011, the New York State Legislature passed the Marriage Equality Act, legalizing same-sex marriage in the state. New York became the sixth state in the US to legalize it, after Massachusetts, Connecticut, Iowa, Vermont, and New Hampshire.

In February 2020, it was revealed by Washington Blade media within and during the 2020 Democratic Party presidential primaries, that former Republican Mayor of New York City Michael Bloomberg vetoed partner benefits for same-sex couples back in 2004 - when at the time same-sex couples had no legal protections whatsoever. But then he made a claim that he now "fully supports same-sex marriage instead". [93]