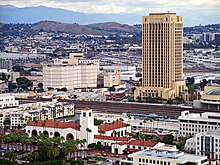 The Los Angeles County Metropolitan Transportation Authority operates the third-largest public transportation system in the United States by ridership with a 1,433 mi² (3,711 km²) operating area and 2,000 peak hour buses on the street any given business day. [6] Metro also operates 105 miles (169 km) of urban rail service. [1] The authority has 9,892 employees, making it one of the region's largest employers. [1]

To increase sustainability in transportation services, Metro also provides bike and pedestrian improvements for the over 10.1 million residents of Los Angeles county. [7]

B Line (opened 1993) is a subway line running between Downtown Los Angeles and North Hollywood.

C Line (opened 1995) is a light rail line running between Redondo Beach and Norwalk, largely in the median of the 105 Freeway. It provides indirect access to Los Angeles International Airport via a shuttle bus.

D Line (opened 2006) is a subway line running between Downtown Los Angeles and the Mid-Wilshire district of Los Angeles. Most of its route is shared with the Red Line.

Metro is the primary bus operator in the Los Angeles Basin, the San Fernando Valley, and the western San Gabriel Valley. Other transit providers operate more frequent service in the rest of the county. Regions in Los Angeles County that Metro Bus does not serve at all include rural regions, the Pomona Valley, the Santa Clarita Valley, and the Antelope Valley.

Metro operates two types of bus services which are distinguished by the color of the buses. [10] However, when mechanical problems or availability equipment occurs, a bus of any color may be substituted to continue service on the route. 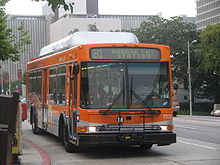 A Metro Local bus on Line 81

Metro Local buses are painted in an off-orange color which the agency has dubbed “California Poppy”. This type of service makes frequent stops along major thoroughfares. There are 18,500 stops on 189 bus lines. Some Metro Local routes make limited stops along part of their trip but do not participate in the Rapid program. Some Metro Local bus lines are operated by contractors MV Transportation, Southland Transit, and Transdev (formerly Veolia). 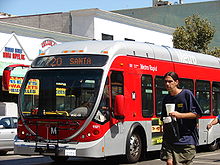 Metro Rapid buses are distinguished by their bright red color which the agency has dubbed “Rapid Red”. This bus rapid transit service offers limited stops on many of the county's more heavily traveled arterial streets. Metro claims to reduce passenger commute times by up to 25% by several methods, among them a headway-based schedule so that drivers are not held up at certain stops and signal priority for Rapid buses. [11] 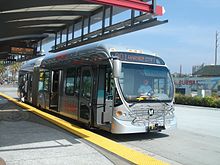 A Metro Liner vehicle at the North Hollywood station on the Orange Line.

Metro Busway is a bus rapid transit system with two lines operating on dedicated or shared-use busways. The system runs a total of 60 miles (97 km), with 28 stations and over 42,000 daily weekday boardings as of May 2016.

The Metro Busway system is meant to mimic the Metro Rail system, both in the vehicle's design and in the operation of the line. Vehicles stop at dedicated stations (except for the portion of the Metro J Line in Downtown Los Angeles), vehicles receive priority at intersections and are painted in a silver livery similar to Metro Rail vehicles.

The Metro Busway J Line operates over two busways, semi-exclusive roadways built into the Southern California freeway system. These busways are also used by other bus routes to speed up their trips.

All Metro passes are sold on TAP Cards, smart fare cards on which customers can load value or a pass; they are valid on all Metro buses and trains as well as most city buses.

Faregates at some Metro Rail stations and the G Line require a TAP card, but Metro as a whole operates on a proof-of-payment system. The Los Angeles County Sheriff's Department, Los Angeles Police Department, Long Beach Police Department and Metro's fare inspectors conduct random ticket inspections throughout the system. If customers are caught without a valid TAP card, they may be fined and/or subject to community service.

Fare evasion was estimated in 2007 to be at 6%, costing Metro $2.6 million annually. In response to this, the Metro board approved fare gating of all stations on the Red and Green Lines, and selected stations on the Orange, Blue, and Gold Lines, capturing 84% of passengers using the system. Adding fare gates was selected to increase fare collections, implement distance based fares on rail and transitways in the future, and reduce the potential of the system to terrorist attack. [13] Former Metrolink executive director Richard Stanger critiqued the gate installation by citing its cost and ineffectiveness, concerns ultimately dismissed by the Metro board. [14]

Metro is governed by a Board of Directors with 14 members, 13 of whom are voting members. [15] The Board is composed of:

In addition, Service Councils, composed of political appointees from various regions of Los Angeles County, approve service changes and oversee bus routes within a region. There are five regions: Gateway Cities, San Fernando Valley, San Gabriel Valley, South Bay, and Westside/Central. Service councils advise on planning and implementation of service within their area; call and conduct public hearings and evaluate Metro bus programs to their area; make policy recommendations to the Metro Board; and participate in quarterly meetings with the Metro Chief Executive Officer (CEO), Deputy CEO and management staff.

Service councils were created as governance councils in 2001, in response to complaints about the effectiveness of Metro service in suburban areas. Communications between sectors and riders was poor, according to a report by the California State Auditor which was released one year into the new structure. [16] In addition, each sector had its own scheduling, operations, and maintenance divisions, causing effort duplication, organizational silos, and inefficiency. [17] Thus, in 2009, the sectors were eliminated, and transportation, maintenance, service planning, and administration were recentralized under the guidance of Metro's Chief Operations Officer. Governance councils, renamed service councils, now have more responsibility over local issues such as stop placement and service changes, while larger issues are handled by the Metro board. [18]

In some cases, governance of Metro lies in the hands of local governmental bodies, such as school boards, and local elected officials. The Beverly Hills Unified School District board, along with its president Lisa Korbatov, is one such example. In 2018, Korbatov was serving her second term as president of the board. She led a public campaign opposed to the extension of the Purple Line subway underneath Beverly Hills High School. Additionally, she rounded up enough signatures to send a petition to President Donald Trump, asking him to withhold federal funding and force the Los Angeles County Metropolitan Transportation Authority to re-route the subway tunnel away from the high school. [19]

A complex mix of federal, state, county and city tax dollars as well as bonds and fare box revenue funds Metro. The Metro budget for 2020 is $7.2 billion. Below is the funding breakdown from Metro's fiscal year 2020 budget. 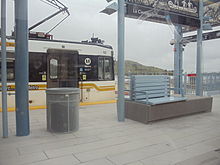 All Metro buses are CNG-powered, the largest such fleet in the United States. [21] The CNG fleet reduces emissions of particulates by 90%, carbon monoxide by 80%, and greenhouse gases by 20% compared to diesel powered buses. Alternative fuel buses have logged more than 450 million operating miles since 1993, an industry record.

Metro operates the nation's largest fleet of CNG-powered buses. The CNG fleet reduces emissions of particulates by 90%, carbon monoxide by 80%, and greenhouse gases by 20% over the 500 remaining diesel powered buses in the fleet. Alternative fuel buses have logged more than 450 million operating miles since 1993, an industry record. Metro has retired all diesel buses (not including contracted buses) and became an entirely clean-air fleet in January 2011.

Main article: History of the LACMTA

LACMTA was formed in 1993 from the merger of two previous agencies: the Southern California Rapid Transit District (SCRTD or more often, RTD) and the Los Angeles County Transportation Commission (LACTC). RTD was during the 1960s to 1980s (until the LACTC was created) the "800 pound gorilla" in bus transportation in Southern California, operating most public transportation in Los Angeles, Orange, San Bernardino, and Riverside Counties, although outlying services began to be divested in the early 1980s. 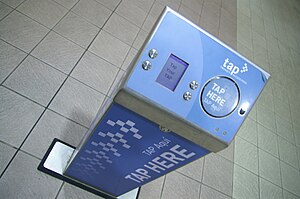 A TAP validator at a Metro station

Metro has expanded its Metro Rapid bus system with a goal of 28 lines since 2008. [22] A Special Master ruling in December 2005 requires Metro to increase service on all Rapid bus routes to every 10 minutes during the peak period and every 20 minutes during the mid-day and evening. Service would be required to operate between 5 a.m. and 9 a.m. on all Rapid routes. Metro has chosen not to appeal the ruling and began implementation on all Rapid routes in June 2006.

In addition, the agency is embarking on a massive bus restructuring effort entitled Metro Connections. The project is designed to convert the current grid-based bus system, implemented in 1980, to a hub and spoke system focused on activity centers. [23] The system is to be phased in the next four years, and will include new express routes and reconfigured local service. Suburban service and low ridership shuttles will be considered for operation by municipal agencies, restructuring, or cancellation.

The Universal Fare system called 'TAP' which stands for Transit Access Pass was introduced to the public in early 2010. The TAP smart card uses near-field communication allowing bus and rail passengers to physically tap their cards on the farebox or fare-gate for faster boarding.

The Crenshaw/LAX Line is being built from Aviation/LAX station on the Green Line to Expo/Crenshaw station on the Expo Line, passing through Inglewood and Crenshaw, Los Angeles. It will connect with a people mover to serve Los Angeles International Airport. A further phase will extend the line to Hollywood to connect with the Red Line.

Metro is planning an extension of the Gold Line into the San Gabriel Valley to the San Bernardino County border city of Montclair. The first phase of this extension, to Azusa, opened on March 5, 2016. Construction for Phase 2 began on December 2, 2017 and is expected to complete by early 2026.

The Regional Connector is a tunnel under Downtown Los Angeles, joining the Gold Line at Little Tokyo Station (1st Street and Central Avenue) to the A Line (Blue Line) and E Line (Expo Line) at 7th Street/Metro Center. This will lead to the creation of two lines, one between Long Beach and Azusa, and the other between East Los Angeles and Santa Monica.

Phase 1 of the Purple Line Extension will add three new subway stations to the D Line (Purple Line) at Wilshire/La Brea, Wilshire/Fairfax, and Wilshire/La Cienega. Further phases will extend the D line to Century City and Westwood. Construction of the second section began in 2018. [25]

The West Santa Ana Transit Corridor has been designated as a priority for mass transit development, making use of the mostly disused Pacific Electric West Santa Ana Branch via Stanton and Garden Grove to Santa Ana for future expansion of rail or busway service. The current proposal is a light rail line with a new route from Union Station to the C Line, then the West Santa Ana Branch right-of-way to Artesia. [26] [27]

The Orange County Transportation Authority (OCTA) is collaborating with the cities of Santa Ana and Garden Grove on the OC Streetcar on the southerly portion of the West Santa Ana Branch. [28]

Metro aims to have a fully electric bus system by 2030, along with a full switch to electric operations for the G and J lines by 2020 and shortly after, respectively. [29]

Measure M, passed on November 2016, extends and increases the Measure R 30-year half-cent sales tax to a permanent one-cent sales tax. This tax is expected to fund $120 billion in highway and transit projects over 40 years. [30] The tax is also expected to support over 778,000 jobs in the Los Angeles area and $79.3 billion in economic output. [31]

Metro has a project list including all current projects being pursued in Los Angeles County, as well as an interactive map.

The Metro rail and bus fleet often make appearances in films and television shows produced in the Los Angeles area, including 2012, Crash, [34] Lethal Weapon 3, Volcano, [35] Superbad, Collateral, [35] The 40-Year-Old Virgin, [36] Battle: Los Angeles, [37] and Captain Marvel. [35] One of the earliest appearances was in the 1994 movie Speed with Keanu Reeves and Sandra Bullock, in which the Metro plays a key part in the plot. [35]