Koger Center for the Arts 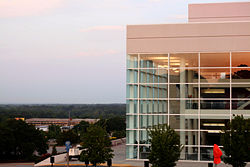 The Koger Center for the Arts

The center is named for philanthropists Ira and Nancy Koger, who made a substantial donation for construction of the $15 million center. [3] The descendants of Ambrose Elliott Gonzales, Narciso Gener Gonzales, and William Elliott Gonzales also made a large donation to the center and the Gonzales Hall auditorium was named in acknowledgement of their contribution.