Kodiak Island is mountainous and heavily forested in the north and east, but fairly treeless in the south. The island has many deep, ice-free bays that provide sheltered anchorages for boats. The southwestern two-thirds of the island, like much of the Kodiak Archipelago, is part of Kodiak National Wildlife Refuge.

Kodiak Island is part of the Kodiak Island Borough and Kodiak Archipelago of Alaska. The town of Kodiak is one of seven communities on Kodiak Island and is the island's main city. All commercial transportation between the island and the outside world goes through this city either via ferryboat or airline. Other settlements include the villages of Akhiok, Old Harbor, Karluk, Larsen Bay, Port Lions, and an unorganized community near Cape Chiniak. The village of Ouzinkie on nearby Spruce Island is also part of the island community.

The Kodiak bear and the king crab are native to the island. The fishing industry is the most important economic activity on the island; fisheries include Pacific salmon, Pacific halibut, and crab. The Karluk River is famous for its salmon run. Logging, ranching, numerous canneries, and some copper mining are also prevalent.

An antenna farm at the summit of Pillar Mountain above the city of Kodiak provides primary communications to and from the island. 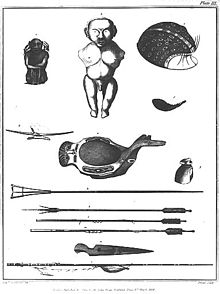 Native artifacts from the Kodiak Islands, engraving c.1805 from a Russian journal 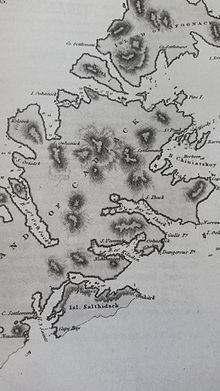 Location of Three Saints Bay and St. Paul on Kodiak in 1805 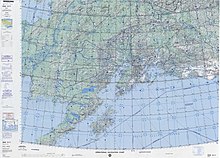 Kodiak is the ancestral land of the Sugpiaq, an Alutiiq nation of Alaska Natives. The original inhabitants subsisted by hunting, fishing, farming,[ citation needed] and gathering. Kodiak Island was explored in 1763 by Russian fur trader Stepan Glotov.

The first outsiders to settle on the island were Russian explorers under Grigory Shelikhov, a fur trader, who founded a Russian settlement on Kodiak Island at Three Saints Bay in 1784; the present-day village of Old Harbor developed near there. [3]:162–163 In 1792 the settlement was moved to the site of present-day Kodiak and became the center of Russian fur trading with the Alaska Natives.

In 1793, Shelikhov, with the help of the governor-general of Irkutsk, was given twenty craftsmen and ten families of farmers with the obligation of paying government taxes for them, for promoting successful development of Russia-America settlements and the establishment of shipyards and factories. [4] The settlers provided to Shelikhov were not serfs in the full sense of the word. It was not possible to sell, mortgage, or give away the settlers; they were owned by the company for as long as the Shelikhov-Golikov Company existed. [4] 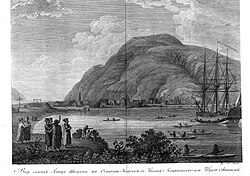 The settlement of Grigory Shelekhov on Kodiak Island.

In 1784, Shelekhov, along with 130 Russian fur traders massacred (see Awa'uq Massacre) several hundred Qik’rtarmiut Sugpiat ("Sugpiaq people of Qik’rtaq/Kodiak") tribe of Alutiiq men, women and children at Refuge Rock, a tiny stack island off the eastern coast of Sitkalidak Island. In Alutiiq, this sacred place is now known as Awa'uq, "to become numb". [5]

The Orthodox mission in Russian America was authorized by Catherine II in 1793, and then was established on Kodiak Island in 1794 by a group of monks from the Valaam Monastery in St. Petersburg. [8]

The Russian fur traders radically expanded sea otter hunting operations and forced the Alutiiq men to hunt for longer periods of time at increasingly distant areas as the local population of fur-bearing animals was extinguished. [7] The Alutiiq suffered starvation and physical separation of families because of the able-bodied men hunting and trapping furs rather than providing food for the women, young, old, and sick as they had done traditionally. [9]

In 1837-1839 a smallpox epidemic swept through all the Russian America territory and destroyed an estimated one-third of the Native population. [7] The remaining Alutiiq on Kodiak Island were then consolidated into seven settlements where they were more readily offered medical, educational, and religious services by the Russian-American Company. [7] The smallpox epidemic was eventually stopped with vaccination of the natives. [9]

Novarupta is a volcano 100 miles (160 km) northwest of Kodiak Island that erupted from June 6 to June 8, 1912: the largest eruption in the 20th century. Life on Kodiak Island was immobilized during the 60-hour eruption. Darkness and suffocating conditions caused by the falling ash and sulfur dioxide gas rendered villagers helpless. Among Kodiak's 500 inhabitants, sore eyes and respiratory problems were widespread. Water became undrinkable. Radio communications were disrupted and visibility was nil. Roofs in the village collapsed under the weight of more than a foot of ash. Buildings were destroyed as avalanches of ash rushed down from nearby hillsides. [10] [11]

On June 9, Kodiak villagers saw the first clear, ash-free skies in three days, but their environment had changed dramatically. Wildlife on Kodiak Island was devastated by ash and acid rain from the eruption. Bears and other large animals were blinded by thick ash, and many starved to death because large numbers of plants and small animals were smothered in the eruption. Birds blinded and coated by volcanic ash fell to the ground. Even the region's prolific mosquitoes were exterminated. Aquatic organisms in the region perished in the ash-clogged waters. Salmon in all stages of life were destroyed by the eruption and its aftereffects. From 1915 to 1919, southwestern Alaska's salmon-fishing industry was devastated. [12]

The island was also hit by the 1964 Good Friday earthquake and tsunami, which destroyed much of the waterfront, business district, and several villages. [13]

The weather of Kodiak is temperate by Alaskan standards. December to March is the cold season while June to August is the summer season. [14] 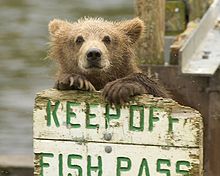 Nearly two-thirds of the island is located within the Kodiak National Wildlife Refuge and has no road access. Refuge headquarters are located on the Chiniak Highway, right at the access road for the Buskin River State Recreation Site, which has camping, picnic areas, beaches, and fishing for salmon and trout in the Buskin River. [16]

The Pasagshak River State Recreation Site is a 25 acres (10 ha) park with a small campground and access to some of the island's best salmon and trout fishing. [17] The island is also home to the Fort Abercrombie State Historical Park.