Founded in Neenah, Wisconsin, in 1872 and based in the Las Colinas section of Irving, Texas since 1985, the company operated its own paper mills around the world for decades, but closed the last of those in 2012. [3] [4] With recent annual revenues topping $18 billion per year, Kimberly-Clark is regularly listed among the Fortune 500. 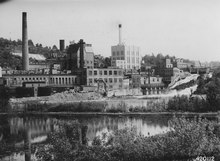 Kimberly, Clark and Co. was founded in 1872 by John A. Kimberly, Havilah Babcock, Charles B. Clark and Franklyn C. Shattuck in Neenah, Wisconsin, with $42,000 (equivalent to US$896,350 in 2019) of capital. [6] The group's first business was operating paper mills, which the collective expanded throughout the following decades. In 1888, the fledgling company faced a significant setback when its groundwood "Atlas" paper mill burned in 1888, however through an extensive effort by labor and management, within five months the mill was rebuilt and in production at a greater capacity. In that same year the company began rapid expansion, purchasing land in a town then known as The Cedars for a new groundwood pulp plant designed by prominent paper mill architects D. H. & A. B. Tower. [7] In 1889, the town was renamed Kimberly after John A. Kimberly. The company would also contract the firm to expand its vast sulphite pulp complex in Appleton, Wisconsin, which allowed it to become the first firm west of Pennsylvania to adopt this improved manufacturing process. [8] [9] The company developed cellu-cotton in 1914, a cotton substitute used by the U.S. Army as surgical cotton during World War I. Army nurses used cellu-cotton pads as disposable sanitary napkins, [10] and six years later the company introduced Kotex, the first disposable feminine hygiene product. [11] Kleenex, a disposable handkerchief, followed in 1924. Kimberly & Clark joined with The New York Times Company in 1926 to build a newsprint mill in Kapuskasing, Ontario, Canada. Two years later, the company went public as Kimberly-Clark. [12]

The firm expanded internationally during the 1950s, opening plants in Mexico, West Germany and the United Kingdom. It began operations in 17 more foreign locations in the 1960s.[ citation needed] The company formed Midwest Express Airlines from its corporate flight department in 1984. Kimberly-Clark's headquarters moved from Neenah, Wisconsin to Irving, Texas the following year, [13] although its products are still produced in Neenah. Under the leadership of Darwin Smith as CEO from 1971 to 1991, the company was transformed from a business paper company to a consumer paper products company.

In 1991, Kimberly-Clark and The New York Times Company sold their jointly owned paper mill in Kapuskasing, Ontario. Kimberly-Clark entered a joint venture with Buenos Aires-based Descartables Argentinos S.A. to produce personal care products in Argentina in 1994 [14] and also bought the feminine hygiene unit of VP-Schickedanz (Germany) for $123 million [15] and a 90% stake in Handan Comfort and Beauty Group (China). [16]

Kimberly-Clark bought Scott Paper in 1995 for $9.4 billion. [17] In 1997, Kimberly-Clark sold its 50% stake in Canada's Scott Paper to forest products company Kruger Inc. [18] and bought diaper operations in Spain and Portugal [19] and disposable surgical masks maker Tecnol Medical Products. [20] Augmenting its presence in Germany, Switzerland and Austria, in 1999 the company paid $365 million for the tissue business of Swiss-based Attisholz Holding. [21] Expanding its offerings of medical products, the company bought Ballard Medical Products in 1999 for $774 million [22] and examination-glove maker Safeskin in 2000 for about $800 million. [23]

Also in 2000, the company bought virtually all of Taiwan's S-K Corporation; the move made Kimberly-Clark one of the largest manufacturers of packaged goods in Taiwan. [24] The company later purchased Taiwan Scott Paper Corporation for about $40 million and merged the two companies, forming Kimberly-Clark Taiwan. [25] In 2001, Kimberly-Clark bought Italian diaper maker Linostar and announced it was closing four Latin American manufacturing plants. [26]

In early 2004, chairman and chief executive officer Thomas Falk began implementation of a global business plan that the company has detailed in July 2003. The firm combined its North American and European groups for personal care and consumer tissue under North Atlantic groups. In 2019, CEO Thomas Falk resigned his position but continued on as the company's chairman of the board. COO Michael D. Hsu became CEO following Falk's retirement.

In April 2020, The Financial Times reported that panic-buying during the COVID-19 pandemic led to a 13 per cent increase in sales of Kimberley-Clark's consumer tissues in the first quarter of 2020 compared with the previous year. [29]

Its subsidiaries include Kimberly-Clark Professional. [31]

The origin of Midwest Airlines can be traced back to 1948, when Kimberly-Clark opened its corporate flight department and began providing air transportation for company executives and engineers between the company's headquarters in Neenah and its paper mills.

In 1969, K-C Aviation was born from the company's air operations, and was dedicated to the maintenance of corporate aircraft. In 1982, K-C Aviation initiated shuttle flights for Kimberly-Clark employees between Appleton, Memphis and Atlanta. With this experience, and considering the Airline Deregulation Act of 1978, Kimberly-Clark and K-C Aviation formed a regularly scheduled passenger airline, Midwest Express Airlines, which was started on June 11, 1984. [32] The name of the airline was shortened to Midwest Airlines in 2003.

K-C Aviation divested itself from the airline in 1996. Two years later, Gulfstream Aerospace purchased K-C Aviation from Kimberly-Clark for $250 million, which included its operations at airports in Dallas, Appleton and Westfield, Massachusetts. [33]

In 2005, Greenpeace launched the Kleercut campaign against Kimberly-Clark because the company had been linked to the logging of ancient boreal forests. The environmental organization charged that Kimberly-Clark was using more than three million tons of pulp a year from forests to produce tissue paper products, such as the Kleenex brand. Greenpeace led a large grassroots student activist campaign targeting Kimberly-Clark for sourcing 22% of its paper pulp from Canadian boreal forests containing 200-year-old trees. [34] [35]

Greenpeace ended its campaign in August 2009 following the release of a new environmental policy by Kimberly-Clark. The corporation agreed to increase its use of recycled fiber, to use only Forest Stewardship Council certified wood, and to stop purchasing pulp from the Kenogami and Ogoki forests. [36] The two organizations announced that they were moving "away from conflict to a new collaborative relationship to further promote forest conservation, responsible forest management, and the use of recycled fiber for the manufacture of tissue products." [37]

Kimberly-Clark has a target to purchase 100% of wood fiber from suppliers that gain independent sustainability certification, with a preference for Forest Stewardship Council (FSC)-certified fiber. Kimberly-Clark stated that by the end of 2010, it had achieved 98% of this target. [38]

As of 2015, most of Kimberly-Clarks tissue products are FSC-certified. [39]

By the 1980s, there was a dead zone for 12 kilometres downstream of the company's operations in Terrace Bay, Canada resulting from a daily flow of 115 million litres of effluent. [40] Jackfish Bay was also affected. [40]

Initially, the company resisted calls to clean up its production methods, publicly hinting in 1986 that forcing the company to clean up would shut it down and force the layoff of 900 workers. [40]

However, the company eventually yielded, and by 1989 it had spent $25 million CAD on a "lagoon to remove suspended solids and oxygen-destroying chemicals from its waste." [40] At the same time, it also changed its bleaching process to stop producing dioxin and other poisons. [40]

Depend is a brand name for adult diapers and other incontinence products worn by both men and women.

GoodNites are absorbent disposable underwear marketed primarily for children and teens who experience bedwetting. The Huggies logo is not present on the packaging.

Huggies are disposable diapers for infants and toddlers.

Pull-Ups is a brand name of training pants for toddlers, marketed together with the Huggies brand of baby products and bearing the Huggies logo on the package.

Little Swimmers is a brand of disposable swim diaper, emblazoned with the Huggies logo.

Kotex is a feminine hygiene product line that includes pantiliners, pads and tampons.

Poise is a brand of pads and liners for adult incontinence.

Cottonelle is a brand name for bath products. Product forms include premium bath tissue and flushable moist wipe products. On October 13, 2020 the Cottonelle brand flushable wipes issued a recall because the products manufactured between February through September may contain Pluralibacter gergovaie. [41]

Kleenex is a brand name of facial tissue paper. Many versions have been made, including "with lotion, our softest ever!" and "regular". In the 1970s, color psychologist Dr. Cody Sweet represented newly styled Kleenex boxes as a national media spokesperson.

Scott is a brand name of paper napkins, paper towels and bath tissue/wipes.

Viva is a brand name of heavy-duty paper towels. [42]

The Mexican market has most of the American products as well as these products:

KimWipes are a type of cleaning tissue commonly used in laboratories. They are intended for applications in which leaving lint or fibers on a surface would be undesirable, such as on slides and pipettes. They are sometimes used to clean lenses, but use on optical lenses with special water- and solvent-based coatings may cause light blemishes, and the manufacturer recommends using a wipe specifically designed for use with coated lenses. KimWipes are composed of virgin wood pulp from certified forests, with few chemical additives.

WypAll is a brand name for cleaning towels, wipes, and cloths. They are used in industrial settings and laboratories.

DryNites are a version of GoodNites sold in Europe and Australasia.