The Kickapoo People ( Kickapoo: Kiikaapoa or Kiikaapoi; Spanish: Kikapú) are an Algonquian-speaking Native American and Indigenous Mexican tribe, originating in the region south of the Great Lakes. Today, there are three federally recognized Kickapoo tribes in the United States: Kickapoo Tribe of Indians of the Kickapoo Reservation in Kansas, the Kickapoo Tribe of Oklahoma, and the Kickapoo Traditional Tribe of Texas. The Oklahoma and Texas bands are politically associated with each other. The Kickapoo in Kansas came from a relocation from southern Missouri in 1832 as a land exchange from their reserve there. [1] Around 3,000 people are enrolled tribal members. Another band, the Tribu Kikapú, resides in Múzquiz Municipality in the Mexican state of Coahuila. Smaller bands live in Sonora and Durango.

According to some sources, the name "Kickapoo" (Giiwigaabaw in the Anishinaabe language and its Kickapoo cognate Kiwikapawa) means "stands here and there," which may have referred to the tribe's migratory patterns. The name can also mean "wanderer". This interpretation is contested and generally believed to be a folk etymology. 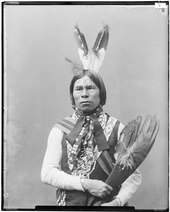 The Kickapoo are an Algonquian-language people who likely migrated to or developed as a people in a large territory along the Wabash River in the area of modern Terre Haute, Indiana. They were confederated with the larger Wabash Confederacy, which included the Piankeshaw to their south, the Wea to their north, and the powerful Miami Tribe, to their east. A subgroup occupied the Upper Iowa River region in what was later known as northeast Iowa and the Root River region in southeast Minnesota in the late 1600s and early 1700s. This group was probably known by the clan name "Mahouea", derived from the Illinoian word for wolf, m'hwea. [2]

The earliest European contact with the Kickapoo tribe occurred during the La Salle Expeditions into Illinois Country in the late 17th century. The French colonists set up remote fur trading posts throughout the region, including on the Wabash River. They typically would set up posts at or near Native American villages, and Terre Haute was founded as a French village. The Kickapoo had to contend with a changing cast of Europeans; the British defeated the French in the Seven Years' War and took over nominal rule of this area after 1763. They increased their own trading with the Kickapoo.

Rising tensions between the regional tribes and the United States led to Tecumseh's War in 1811. The Kickapoo were one of Tecumseh's closest allies. Many Kickapoo warriors participated in the Battle of Tippecanoe and the subsequent War of 1812 on the side of the British, hoping to expel the American settlers from the region. A prominent, nonviolent spiritual leader among the Kickapoo was Kennekuk, who led his followers during Indian Removal in the 1830s to their current tribal lands in Kansas. He died there in 1852.

The close of the war led to a change of federal Indian policy in the Indiana Territory, and later the state of Indiana. American leaders began to advocate the removal of tribes to lands west of the Mississippi River, to extinguish their claims to lands wanted by American settlers. The Kickapoo were among the first tribes to leave Indiana under this program. They accepted land in Kansas and an annual subsidy in exchange for leaving the state. 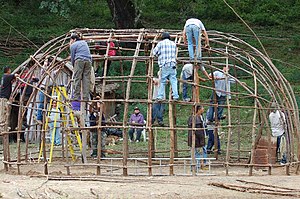 Kickapoo people building a Winter House in the town of Nacimiento Coahuila, México, 2008

Kickapoo speak an Algonquian language closely related to that of the Sauk and Fox. They are classified with the Central Algonquians, and are also related to the Illinois Confederation.

In 1985 the Kickapoo Nation's School in Horton, Kansas, began a language immersion program for elementary school grades to revive teaching and use of the Kickapoo language in grades K-6. [4] Efforts in language education continue at most Kickapoo sites. In 2010, the Head Start Program at the Kickapoo Traditional Tribe of Texas (KTTT) reservation, which teaches the Kickapoo language, became "the first Native American school to earn Texas School Ready! (TSR) Project certification." [5]

Also in 2010, Mexico's " Instituto Nacional de Antropología e Historia (INAH) participated in the elaboration of a Kickapoo alphabet that may be used by more than 700 members of the group that dwell in Mexico and the United States, in the states of Coahuila and Texas. Previously no Kickapoo alphabet was used in Mexico; although there is a syllabic writing system it has no element ordination, organization or classification method." [6] The Kickapoo in Mexico are known for their whistled speech.

The Kickapoo language and members of the Kickapoo tribe were featured in the movie The Only Good Indian (2009), directed by Greg Wilmott and starring Wes Studi. This was a fictionalized account of Native American children forced to attend an Indian boarding school, where they were forced to speak English and give up their cultures. [10]

There are eleven consonant phonemes in Kickapoo:

The voiceless sounds can sometimes be voiced as [b, d, dʒ, ɡ, ð, z], but infrequently. Some speakers may pronounce /tʃ/ as [ts].

There are three federally recognized Kickapoo communities in the United States: one in Kansas, one in Texas, and the third in Oklahoma. The Mexican Kickapoo are closely tied to the Texas and Oklahoma communities. These groups migrate annually among the three locations to maintain connections. Indeed, the Texas and Mexican branch are the same cross-border nation, called Kickapoo of Coahuila/Texas [12]

The tribe in Kansas was home to prophet Kenekuk. Kenekuk was known for his astute leadership that allowed the small group to maintain their reservation. Kenekuk wanted to keep order among the tribe he was in, whilst living in Kansas. He also wanted to focus on keeping the identity of the Kickapoo people, because of all the relocating that they that to do. [13]

The basis of Kenekuk's leadership began in the religious revivals of the 1820s and 1830s, with a blend of Protestantism and Catholicism. Kenekuk taught his tribesmen and white audiences to obey gods commands for sinners were damned to the pits of hell. [13] Once the Kickapoo people got relocated to Kansas they resisted the ideas of Protestantism and Catholicism and started focusing more on farming, so they could provide food for the rest of the tribe. After this had happened they remained together and claimed some of the original land that they had before it was taken by Americans.

Other Kickapoo in Maverick County, Texas, constitute the "South Texas Subgroup of the Kickapoo Tribe of Oklahoma". That band owns 917.79 acres (3.7142 km2) of non-reservation land in Maverick County, primarily to the north of Eagle Pass. It has an office in that city. [15] 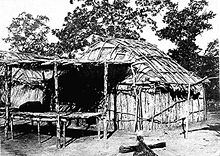 After being expelled from the Republic of Texas, many Kickapoo moved south to Mexico, but the population of two villages settled in Indian Territory. One village settled within the Chickasaw Nation and the other within the Muscogee Creek Nation. These Kickapoo were granted their own reservation in 1883 and became recognized as the Kickapoo Tribe of Oklahoma.

The reservation was short-lived. In 1893 under the Dawes Act, their communal tribal lands were broken up [16] and assigned to separate member households by allotments. The tribe's government was dismantled by the Curtis Act of 1898, which encouraged assimilation by Native Americans to the majority culture. Tribal members struggled under these conditions.

In the 1930s the federal and state governments encouraged tribes to reorganize their governments. This one formed the Kickapoo Tribe of Oklahoma in 1936, under the Oklahoma Indian Welfare Act. [17]

Today the Kickapoo Tribe of Oklahoma is headquartered in McLoud, Oklahoma. Their tribal jurisdictional area is in Oklahoma, Pottawatomie, and Lincoln counties. They have 2,719 enrolled tribal members. [18]