Kia Motors is a South Korean automobile manufacturer, with a production output of 2 million vehicles per year. Pictured is the Kia Forte Koup.

The Namyang Design Center, located in Hwaseong, South Korea, serves as Kia's primary design facility. [2] The facility, which is shared with parent company Hyundai, is located on over 3.3 million square meters of land and serves as the central hub for engineering work encompassing the entire design process, from pre-design studies, prototyping and extensive track testing, full-scale wind tunnel aerodynamic testing. [3] to crash testing. [4] Kia and Hyundai employees from around the world receive training at the Namyang Center. [4]

The Kia Design Center America in Irvine, California, is located on a 22 acres (8.9 ha) corporate campus [5] with a $130 million initial investment, [5] the Irvine, California Kia Design Center was designed by Skidmore, Owings & Merrill [5] and was completed in 2008, featuring 45 workstations and nine offices. [6] The studio can model up to eight vehicles at once and includes a computerized milling machine that can quickly create full-size models. [6] Work and presentation areas include a 2-D presentation room, "a kind of darkroom in virtual reality where up to three full-size digital images can be projected for evaluation and comparison." [6]

The Kia Design Center Europe was opened in 2007 in Frankfurt, Germany. Kia had previously shared a facility with Hyundai in Russelsheim, Germany. [7] The new headquarters building is located adjacent to Frankfurt's main showground where the city hosts its biennial auto show. [7]

The Hyundai-Kia R&D center in China is located in both Shanghai and Yantai. [8] 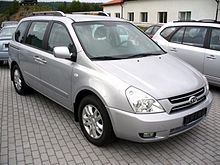 South Korea: The Sohari Plant in gwangmyeong , was Kia Motors first integrated automobile manufacturing plant, [9] established in 1973 on 498,908 square metres (5,370,200 sq ft) of land. Subsequently, the plant manufactured Kia's first internal combustion engine, [9] followed by the manufacture of its first automobile, the Kia Brisa (1974–1982). In 1975, Kia exported its first vehicle, the Brisa pickup, to the Middle Eastern nation of Qatar. [10]

The South Korean government forced Kia to halt car production in 1981, assessing the Korean auto market as too competitive. [11] In 1986, the government allowed the company to resume manufacturing with its agreement to build the Ford Festiva for export. [11]

The Sohari Plant manufactured the Kia Pride and its rebadged variants the Ford Festiva [11] and Mazda 121, as well as the subsequent Kia Avella and its variant, the Ford Aspire. The factory currently manufactures the Kia Carnival/Sedona (and its variant the Hyundai Entourage, 2007–2009), Kia Rio, Kia Stonic and Kia K9/Quoris/K900, with an annual output of 340,000 vehicles. [12]

The plant is located in Soha-dong, Gwangmyeong, South Korea, near the country's capital of Seoul in the Gyeonggi province — with ready access to labor, other resources and transportation facilities, as well as the Seoul metropolitan area. [13]

South Korea: Located in Seosan, the facility opened in 2004 as a joint venture with Donghee. It manufactures 230,000 units a year and is the producer of the Kia Picanto/Morning and Kia Ray. [15]

Slovakia: In April 2007, [18] Kia opened its first plant in Europe, at the initial cost of €1b, in Žilina, Slovakia, about 200 kilometres north-east of Bratislava, with initial production concentrating around the Kia Cee'd model, designed exclusively for the European market, with production later expanding to the Kia Venga and Kia Sportage. The capacity of the plant is 300,000 units per year. [19] It is one of the few auto factories in the world that is capable of building up to eight different models on the same line, and build ratios can be adjusted to demand. [20] 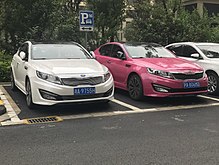 Kia K5s produced at the Yancheng Plant in China

China: In December 2007, Kia Motors Corporation opened its manufacturing facility in Yancheng, Jiangsu Province, its second plant in China and its second plant in conjunction as a joint venture. [21] Dongfeng Yueda Kia (DYK) Motors is a joint venture of Kia and China's Dongfeng Automotive Group first established in 2002. The new facility is 3.9 million sq.-ft. (367,794 sq.-m) [21] and is located just 2.2 miles (3.5 km) from the joint venture's existing facility. [21] At an initial cost of US$800 million, the fully integrated passenger car production facility will have an annual capacity of 300,000 units, boosting DYK's total annual capacity to 430,000 vehicles. [22]

In addition to four main areas (stamping, welding, paint, and assembly), the facility also includes a transmission shop, module shop, and a two-mile (3 km) test track. [23] The assembly area features more than a half mile of height-adjustable conveyors and wood flooring.

Mexico: Located in Pesquería, near Monterrey, Nuevo León, and opened in September 2016, [26] this US$1 billion plant is capable of producing 300,000 cars annually. [27] The facility currently manufactures the third generation Forte and the fourth generation Rio. [28] It also manufactures the fifth generation Hyundai Accent for the American continent. [29]

India: The company, an affiliate of Hyundai Motors, is setting up a greenfield facility in the Anantapur district of Andhra Pradesh that is anticipated to cost US$1.1 billion. The site occupies 536 acres (2.17 km2) and will incorporate facilities for stamping, welding, painting and assembly with annual production capacity of 300,000 vehicles. [30] Its head office is currently in Amaravathi which is the new capital of Andhra Pradesh. It will also be home to supplier companies’ facilities. The plant currently manufactures the Kia Seltos from mid-2019 for domestic market and exports to emerging markets. [14] The plant also manufactures the Kia Carnival exclusively for domestic market.