From Wikipedia, the free encyclopedia
Islet in Kauai County, Hawaii 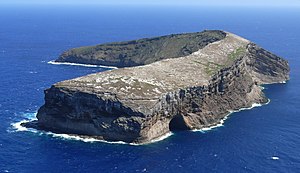 Kaʻula Island viewed from the north

In the legend of Papa and Wākea, Ka'ula is the seventh-born child.

It is located 23 mi (37 km) west-southwest of Kawaihoa Point on Niʻihau, and about 150 nmi (278 km) west of Honolulu. The island is the top of a volcanic tuff cone that rests on top of a larger, submerged shield volcano. At its highest point, the island reaches a height of 548 ft (167 m). [1] The ocean has carved large sea cliffs on the sides of the island. There is a large cave on the northwest side of the island called Kahalauaola (Shark Cave). [2]

Kaʻula, which he spelled as "Tahoora", was one of the first five islands sighted by Captain James Cook in 1778.

A lighthouse was completed on the island in 1932 by the former United States Lighthouse Service. It remained in operation through 1947.

The island has been used as a bombing range by the United States Navy since at least 1952. Inert ordnance is currently used, although live explosive ordnance has been used in the past. There is a risk of unexploded ordnance on the island. Permission from the U.S. Navy is required to land on the island. In 1978, over the objection of the U.S. Navy, the state of Hawaiʻi claimed ownership of Kaʻula and named the island a State Seabird Sanctuary. A final determination of ownership has not yet been made, and the Navy still uses the southeast point of the island as an aerial bombing and strafing target. [4]